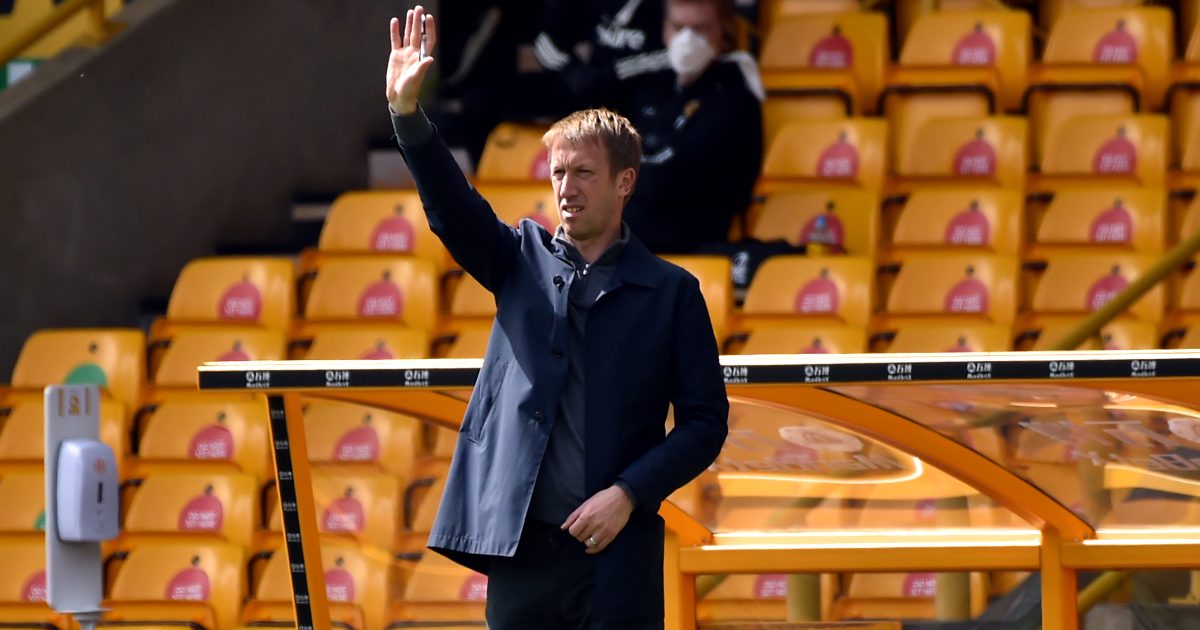 Brighton boss Graham Potter was left feeling “disappointed” as his side missed a chance to secure their Premier League status against Wolves.

Victory would have secured Premier League safety for the Seagulls but Morgan Gibbs-White’s last-minute strike earned the hosts a 2-1 win.

Mid-table Wolves turned the game when Lewis Dunk was sent off in the second half for hauling back Fabio Silva after giving the Seagulls a first-half lead.

OPINION: Wolves prove if you are young enough, you are good enough

Adama Traore’s equaliser set up a frantic finish at Molineux as Wolves cashed in on Dunk’s dismissal having been second best until then.

Neal Maupay was also red carded when he confronted referee Jon Moss after the final whistle.

“I’m disappointed with the result, disappointed we couldn’t get the three points. Until you are safe you have to keep fighting,” said Potter, with Brighton 15th and 10 points clear of the bottom three.

“We gave everything and it wasn’t to be. It (the red card) certainly made it a lot more difficult. We were good, we were deservedly in the lead and looking to add to that.

“It happens in football, collectively we weren’t good at the start of the second half and sometimes you have to see those periods outs. That probably results in the red card.

Potter added: “I think Neal’s red card was for speaking to the ref, he is frustrated, I don’t know what’s been said but he needs to be able to to handle that better.

“That’s the challenge, it’s not easy to deal with defeat and disappointment but we have to. We lose him so it’s not positive for us.”

Dunk struck in Brighton’s first attack when he headed in Pascal Gross’ corner after 13 minutes.

The defender forced Rui Patricio into a fine save 12 minutes later while Adam Webster headed at the goalkeeper and Maupay shot over.

Brighton were in control but the game slipped away once Dunk was dismissed eight minutes into the second half.

Silva raced onto Vitinha’s pass and the defender pulled him back to receive a red card.

Wolves pinned Brighton back and finally levelled with 14 minutes left when Traore swapped passes with Silva to beat Robert Sanchez.

Gibbs-White then looked to have wasted the chance for victory when he shot over with the goal gaping after Traore charged down Sanchez’s clearance before the late drama.

Wolves boss Nuno Espirito Santo said: “We had a very bad first half, a lack of energy, we didn’t play well, we were comfortable on the ball but didn’t threaten or break lines.

“We had to correct that and the boys showed a good reaction, even before the red card we started the second half well.

“I think Morgan had a good game. He showed character to get the balance and be focused again after the awful mistake (miss) he made.

“I’m very happy for Adama because he deserves that, he’s a fantastic player.”