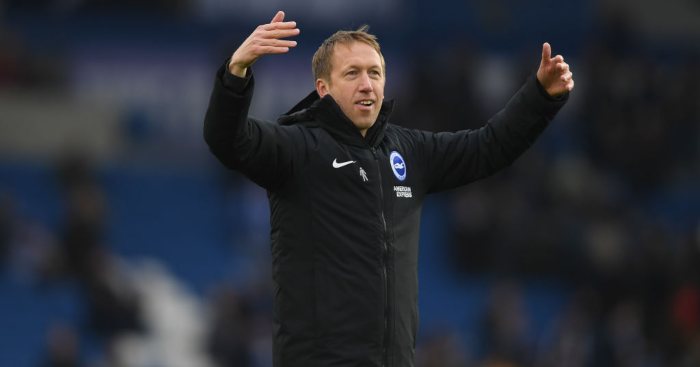 The Seagulls suffered their biggest home defeat in the Premier League in this fixture last season but got off to a dream start this time around, when Alireza Jahanbakhsh hit his first goal for the club, and Aaron Mooy fired home in the second half to secure all three points.

The game was not without controversy, with VAR overruling a second-half goal from Dan Burn after the left-back was judged to be offside.

Potter said: “(I’m) Delighted with both, proud of the players, in terms of the performance, they put a lot of work into the game, and a good understanding of what we’re trying to do and some good quality at times as well I thought and then obviously the result we’re very happy with because we know it is about getting the points as well.

“So, an important three points and good for everybody I think, good for the supporters to get a clean sheet and maybe could have got another goal but in the end it’s three points that we’re delighted with.”

On the overruled Burn strike, which denied the left-back his first goal for the club, he added: “I can’t complain about VAR generally in terms of what’s happened to us but I know that those things do affect the game because the reality of it is you almost can’t celebrate goals any more because you have to get everything checked and then you can have another celebration, but as soon as you bring it in that was always going to happen so I don’t know why anyone was surprised by this.”

Bournemouth boss Eddie Howe admitted his side struggled to get going at the Amex Stadium, and have just two wins from their last 14 top-flight matches.

He said: “We had a slow start today. We didn’t really settle in the game for 10 minutes and once we did I thought we were fine, we were good.

“We created chances. At half-time obviously disappointed to be behind to have conceded the way we did but reasonably optimistic about the second half and what that could be for us after quite an entertaining 30 minutes for us.

“But second half I thought we fell away form that level and we struggled to build any momentum to have any controlled possession. We were disjointed and it was a difficult 45 minutes for us.”