Home All The News Powell: England can become ‘household names’ with WC win 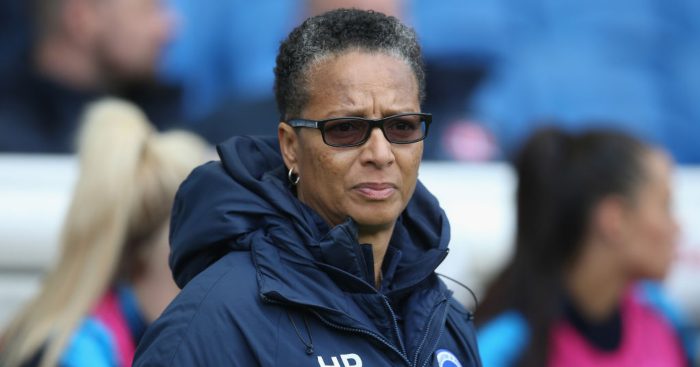 Hope Powell says England Women are in a strong position to make themselves “household names” by winning the World Cup for the first time.

The Lionesses, under the guidance of head coach Phil Neville, begin their quest for glory with Sunday’s Group D clash against Scotland in Nice.

Former national team boss Powell managed the side at six major tournaments during a 15-year tenure.

The 52-year-old, now in charge of Women’s Super League club Brighton, has high expectations of the current squad, which is ranked third in the world and includes eight players she took to Euro 2013.

“I think the players that England have to select from can match against the very best in the world. I think they’ve got a really good chance of doing well,” Powell told Press Association Sport.

“England have got everything to play for. They are in a really good position.

“Who’s going to win it? I don’t know. They’ll be household names (if they do).

“I still see a lot of the players now. They are just nice kids – I just want them to do well.”

Powell plans to be at the Parc des Princes in Paris for Friday’s opening match between hosts France and South Korea.

She watched from the stands as England’s final warm-up friendly ended in a surprise 1-0 defeat to New Zealand at Brighton’s Amex Stadium.

More than 20,000 fans attended Saturday’s south-coast send off, which served as a major wake-up call for Neville’s side before the big kick-off.

Regardless of the Lionesses’ performance in France, Powell – who retired from playing before taking the England job in 1998 – believes the women’s game is “in a better place than it’s ever been” and that interest will continue to grow.

“The good thing is that the impact seems to be sustainable now. Usually it would have a massive impact, interest would spike, and then it would drop off,” said Powell, who reached two World Cup quarter-finals as England boss.

“If they do get knocked out, the interest will still be there, I’m sure.

“I was involved in the women’s game as a player when it was nothing, there was no interest.

“It (women’s football) is in a better place than it’s ever been.”

The Football Association has turned to male coaches since Powell’s reign ended six years ago.

Mark Sampson led the Lionesses to third place at the last World Cup and the semi-finals of Euro 2017, before being succeeded by former Manchester United and Everton player Neville in January 2018.

At present there are no female coaches managing in the professional men’s game in England, but Powell sees no reason why that should continue.

“Many women across the world now have the highest qualification in the game so it’s about whether, number one, they want to, and it’s about opportunities and somebody employing them,” she said.

“It’s not that there aren’t qualified people to do it. It’s choices from owners who are appointing and choices from the coaches themselves.”

Powell, who guided Brighton to safety with a ninth-place finish in their first season in the WSL, currently holds no ambition of managing a men’s side.

Top-flight survival remains the target for Albion next season but Powell also hopes to challenge for silverware in the future.

“I’m no different from anybody else, I want to win things, I want to build something really great with this club. I’m very, very happy here,” she said.