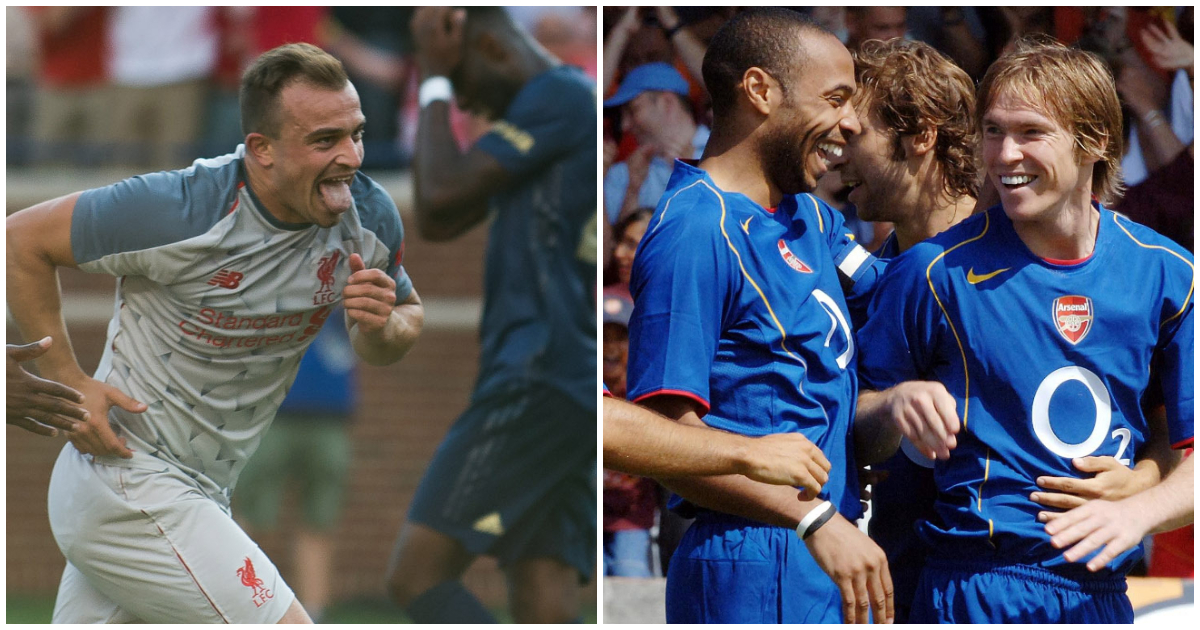 In case you missed it, the Manchester United midfielder did a madness at Old Trafford on Wednesday night.

Really, after tw*tting in a ripsnorter from 30 yards in front of the Stretford End, Pereira should’ve continued running and headed straight down the tunnel to leave United on a high before joining Getafe or wherever.

Pereira isn’t the first player to waste a moment of genius on a pre-season friendly. Here are six more worldies from warm-up matches…

Yossi Benayoun for Chelsea v Wycombe, 2011
One off the training ground… literally.

Which is a shame because Benayoun’s magic deserves a far wider audience than one man and his dog and Cobham. It also warranted a far grander description than ‘this cheeky finish just crossing the line’.

If Benayoun did that at a sold-out Stamford Bridge, the Chelsea TV anchorman would have been reaching for the Kleenex. Which would be the appropriate response.

Another interesting facet to the video: John Terry at least trying look like he’s listening to Andre Villas-Boas.

Throwback to Thierry Henry's stunning goal against Weiz in a pre-season game in 2005 pic.twitter.com/AcsiXa19PV

This was only the three minutes into a 5-0 win for Arsenal, which is awful early to be sending his defender for the papers.

And the finish… never has a goalkeeper tried so hard while remaining so far from reaching a ball.

But we’ll allow Rodriguez this indulgence since it was the one single thing he did in a Real shirt. The midfielder managed a single Copa del Rey appearance before being sold to Sevilla.

The ball rebounding back way, way out of the net and the ‘clang’ off the goal frame also adds to its unique appeal.

Marcel Ngjeng for Paderborn v Bolton, 2015
“The best goal I’ve ever seen in my life,” was how Bolton boss Neil Lennon described this piece of ridiculousness from Ngjeng for the German side recently relegated from the Bundesliga in their 4-1 win over the Trotters.

Normally, with any goal scored from the centre circle, one of the first reactions is to question the goalkeeper’s choice of lead boots. But there is literally nothing that Ben Amos could have done to prevent one of the sweetest volleys you are ever likely to see from a lad who’d just been released by Hertha Berlin.

Xherdan Shaqiri for Liverpool v Man Utd, 2018
This isn’t even the best bicycle kick Shaqiri has scored. Compared to his stunner for Switzerland at the Euros, this was a mere tap-in…

But it’s still a thing of wonder. And if there’s a perfect way to introduce yourself to Liverpool fans as a new signing, it must surely be scoring an overhead kick in a 4-1 win against Man Utd, even if Pereira bagged a beauty in that game too.

Filippo Inzaghi for AC Milan v Barcelona, 2010
If you were wondering where before you’d seen Robin van Persie’s incredible for Man Utd against Villa in 2013, it would be here, with Clarence Seedorf in the Wayne Rooney role…