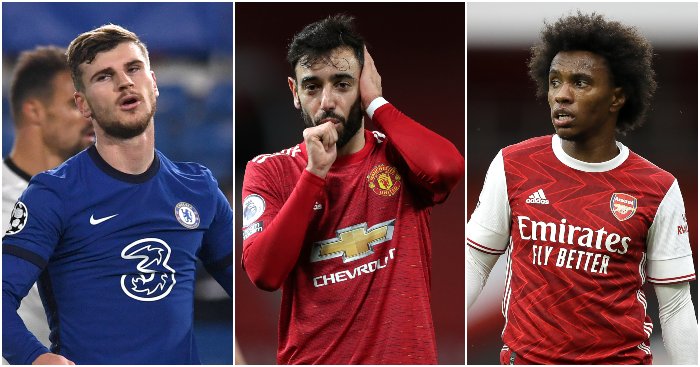 We always revisit our pre-season predictions at Christmas. There’s usually rather more of the season to judge…but it’s never too early to expose ourselves as utter idiots. Willian?

We start with the Premier League winners question. Half of us went for Liverpool and are probably right, John Nicholson’s prediction of Manchester United does not seem as ridiculous in December as it did in September. And he might well be right about with his ‘carthorses’ theory. But early fool points go to Will Ford for suggesting that Liverpool’s squad is ‘incredibly shallow’. It sort of seems okay, Will.

We know that nobody ever gets the top four order right but we can rule out Sarah Winterburn and Nicholson in December for mentioning Arsenal. ‘One of these days I am going to be right about Arsenal’s glorious return and this feels like the perfect time,’ wrote the boss. She is a numpty. Nobody picked any team from outside the Big Six and that feels like a massive error, but then we remember that this time last year Leicester were second and Sheffield United fifth, so the challenge is now on for the Foxes (again) and Everton to sustain their form well into the new year.

Relegation next. And nobody even mentioned Sheffield United. Too many of us said either West Ham or Aston Villa (or both, Will Ford), while Matt Stead, Daniel Storey and Nicholson can be proud that they picked three teams genuinely in a relegation battle. Though nobody saw Arsenal coming. Including Arsenal, we suspect.

And on to the pleasant surprise. Lots of people mentioned Southampton and Leeds so we can pat ourselves on the back/pretend we’re right about that, while Winterburn (Brighton), Ford and Watson (Newcastle) are finding this season less than pleasant in the surprise stakes.

Golden Boot time. Oh, Daniel.  ‘Slightly rogue pick maybe, but Anthony Martial. Tenth favourite seems odd given that he was six off top last season and will presumably play as the central striker all season.’ Rogue indeed and even further off the mark than less roguish shouts for Timo Werner and Pierre-Emerick Aubameyang. Watson was the only man to mention Mo Salah so he takes the non-existent points at this juncture.

New signing impact now and for f***’s sake, Winty: ‘I am opening myself up to derision, but I think Willian will have one excellent season.’

Elsewhere, quiet claps for Stead (Callum Wilson), Storey (Allan) and Joe Williams (Abdoulaye Doucoure) are drowned out by the shouts of derision for almost everyone else believing that Werner would instantly score a hatful. Still, at least they didn’t mention sodding Willian.

Massive flop-wise, Winterburn earns back some credit with the so-far floppy Kai Havertz, while Ford might be clawing back some respectability by questioning the signing of Nathan Ake. Elsewhere, Nicholson might still be half-right about James Rodriguez, but Williams is just plain wrong about Ollie Watkins. Who would actually have been the best answer? Willian, isn’t it? Bloody hell.

We obviously have no idea who will win the PFA Player of the Year, but Bruno Fernandes has already been named our player of 2020 so Nicholson and Watson grab a couple of quarter-points. Or they would if we were scoring.

The first manager to leave the Premier League job? So, so many of us fell into the David Moyes trap that we should be thoroughly ashamed of ourselves, while nobody at all mentioned the actual answer of Slaven Bilic. Tickner absolutely f***ed it with this: ‘Not sure he’ll be first, but the value pick is Brendan Rodgers assuming, as I think we must, that Leicester are committed to continuing their baffling policy of following Tottenham’s Spursy blueprint one year on.’

Nobody picked Manchester United as the Champions League winner so all still have a runner in this particular race.

Finally, we asked for five words to describe the most exciting thing about this season and now we are crying for Williams.