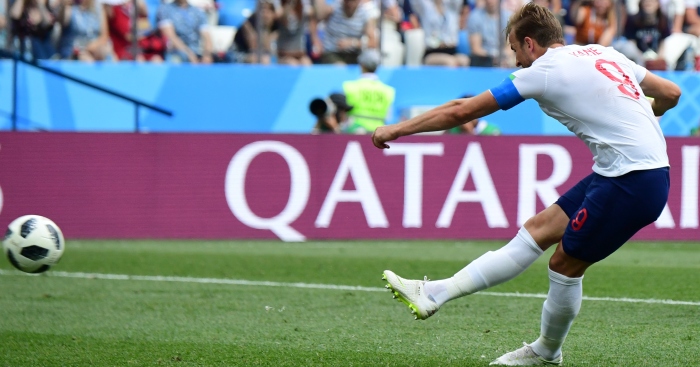 England face Colombia in the World Cup last 16 in Moscow on Tuesday. You may have heard.

Boss Gareth Southgate has said they have prepared for penalties since March and, here, we look at the data to determine which players are best equipped should the Three Lions face a shoot-out.

THE FIRST FIVE
Harry Kane: The World Cup’s current top scorer with five goals, Kane has already scored two penalties against Panama this tournament. He has a 77.8 per cent success rate, scoring 21 of his 27 spot-kicks for Tottenham and England.

Jamie Vardy : Vardy’s 80 per cent conversion rate is the best in the England squad for anyone who has taken two or more penalties. The Leicester striker has netted 12 of his 15 spot-kicks but missed for the Foxes against Everton, Liverpool and Manchester City.

Ashley Young: Young has scored eight of his 14 senior penalties, for a 57.1 per cent success rate. He scored twice in the same shoot-out for England Under-21s in a semi-final against Holland at Euro 2007 but hit the bar when the senior side lost to Italy at Euro 2012.

Marcus Rashford: The Manchester United man takes a lot of the set-pieces but has only ever taken one penalty. He scored one while netting a hat-trick in England Under-21s’ 6-1 win over Norway.

Jesse Lingard: Lingard has missed his only senior spot-kick against Millwall on loan at Birmingham in 2013 but he has already said he would take a penalty in a shoot-out and is brimming with confidence.

THE WILD CARDS
Harry Maguire: The Leicester defender has missed four of his six penalties but did score from the spot under pressure in Sheffield United’s 8-7 shoot-out defeat to Huddersfield in the 2012 League One play-off final.

Jordan Henderson: The midfielder has a 50 per cent success rate from his two spot-kicks, seeing an effort for Sunderland saved by Brad Guzan in 2009 and scoring in Liverpool’s 4-1 defeat at Arsenal in 2015.

Dele Alli: He has a 100 per cent strike rate, scoring his only senior penalty in Tottenham’s 2-1 win over Southampton last year. If he is fit and on the pitch it would be no surprise to see him take one.

THE UNTESTED
Eric Dier: Dier can strike a dead ball with venom, as he showed when scoring a free-kick against Russia from 25 yards at Euro 2016. But he has not taken a penalty at senior level so remains untried from 12 yards.

Trent Alexander-Arnold: He is lauded within the England ranks as being one of the best crossers of the ball but the 19-year-old would be a left-field choice to take a penalty.

Kieran Trippier: Trippier’s delivery from wide areas has been exceptional this tournament and he also shares free-kick duties so it would not be a surprise to see the Tottenham defender step up.

David Ospina: Arsenal’s goalkeeper could stand in England’s way and since he arrived at the Gunners he has faced eight penalties, conceding the first seven and then saving Tom Pettersson’s penalty for Ostersund in February.