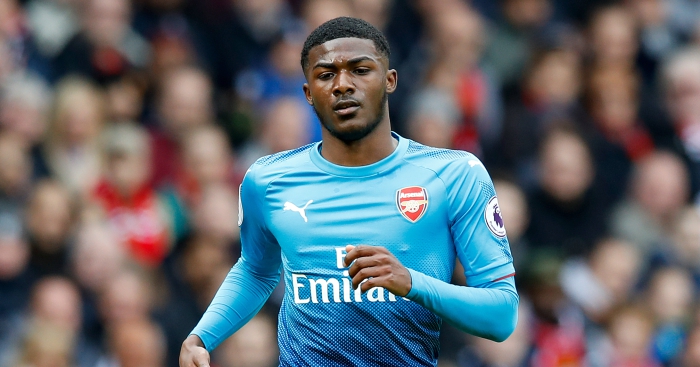 With England winning two whole games of football, players will be keener than ever to join the gang…

ARSENAL – Ainsley Maitland-Niles
While Gareth Southgate is the England manager, being capped for your country at U-17, U-18, U-19, U-20 (winning the World Cup) and U-21 levels will earn you an awful lot of credit; this is a player infused with England DNA. It also helps if you can play in two or three positions and your new club manager surprisingly speaks at length about your prospects in his job interview. If Maitland-Niles starts next season in the Arsenal team, he will surely have an England call before Christmas.

BOUREMOUTH – Callum Wilson
He has played under Gareth Southgate before – 24 minutes in an Under-21 friendly almost four years ago – so he is not quite an England outsider like other unfancied and unfashionable English strikers like Glenn Murray or Ashley Barnes. You get the feeling that a run of goals at the right time (scoring four goals in six games in January was simply a waste) could earn him a shout. Southgate must surely be itching for a reason not to call up Danny Welbeck.

BRIGHTON – Lewis Dunk
Gareth Southgate has capped 11 centre-halves and yet there is a long list of pretty decent (though crucially not brilliant) English centre-halves who still remain uncapped. One of those is Dunk, who is starting several yards behind any player who has already been through the doors of St. George’s Park at least once. Midfielder Solly March has previously played under Southgate, but his Brighton part is too ‘bit’ to become England’s first Seagulls player since Steve Foster back in 1982.

BURNLEY – Ben Mee
With Nick Pope, James Tarkowski and Jack Cork all capped this season, Ben Mee has reason to believe. The problem is that his England Under-21 caps are now so long ago that Stuart Pearce was the manager. As above, there is no shortage of pretty decent English centre-halves so he could yet be left kicking his heels wondering why Michael Keane and now Tarkowski get all the credit for his excellent Burnley defence.

CARDIFF CITY – Josh Murphy
If you are an £11m English winger, there should be at least some ambition of a breakthrough at England level. “I have watched him for six years now and he excites me,” said Neil Warnock. Will he excite Gareth Southgate too?

CHELSEA – Mason Mount
The only English players to feature for Chelsea in all competitions last season were Gary Cahill (at the World Cup), Danny Drinkwater (back-up), Ross Barkley (broken), Callum Hudson-Odoi (80 minutes), Kyle Scott (capped at American youth level), Jake Clarke-Salter (19 minutes) and Dujon Sterling (15 minutes). So to find Chelsea’s next debutant, one must inspect their vast pool of loan players, where Mason Mount had an excellent season with Vitesse Arnhem, where he scored eight goals and claimed nine assists in the Eredivisie. Oh and he has seven goals in 16 appearances for England’s Under-19s. A month ago he was training with England’s World Cup squad so this one is pretty much nailed on.

CRYSTAL PALACE – Aaron Wan-Bissaka
The James Tomkins, Scott Dann, Jason Puncheon and Joel Ward ships have all sailed, while Aaron Wan-Bissaka’s has only just docked at Premier League level. Roy Hodgson has been left “amazed” at how the right-back slotted seamlessly into the first team last season, and he now has genuine competition in that position. Wan-Bissaka has since been pulled into the England fold – a call that left him “in shock” – and he has picked up two Under-20 caps, though he was sent off on his debut. Oops.

EVERTON – Ademola Lookman
There were apparently serious calls for Gareth Southgate to take Ademola Lookman to the World Cup this summer, largely from people who had not seen him play for RB Leipzig but were seriously impressed with a record of five Bundesliga goals (from the wing) since joining the German club on loan in January. While this summer clearly came too soon for Lookman, he does has a fan in new Everton director of football Marcel Brands (“He is a very talented young player and I think he has to be moved up next year”) so more Everton opportunities could lead to a promotion from the Under-21 squad.

FULHAM – Ryan Sessegnon
The European Under-19 champion has been fast-tracked into the England Under-21s but he is unlikely to stay there for too long if he is half as good in the Premier League as he has been in the Championship. He is simply one of English football’s greatest talents. “He’s clearly got something that is special. It’s about making sure we keep his feet on the ground and not get too excited,” says England Under-21 coach Aidy Boothroyd. Balls to that, Aidy, it’s coming home.

HUDDERSFIELD – Alex Pritchard
“For Alex, he had a good impact on the tournament on the back of a really good season for him and it’s a shame he won’t be able to display his talents on this stage,” said Gareth Southgate during the summer of 2015 when Pritchard was stretchered out of the European Under-21 Championships. So he knows Pritchard and he rates him; whether that will translate into Pritchard becoming the first Huddersfield Town player to represent England since Mike O’Grady in 1969 is another matter.

LEICESTER – Ben Chilwell
While Harry Redknapp is still wondering when Jamaica international Wes Morgan will receive an England cap, the rest of us are contemplating whether Demarai Gray will ever be good enough. The winger is perhaps too good for the U21s, but will never make the step up until he becomes a regular at club level. As for Chilwell, only injury prevented him from ending the season as Leicester’s first-choice left-back; he is still only 21 and has been capped at pretty much every England youth level. “When we were under-14s, under-15s and under-16s and we spent time at St George’s Park, they were trying to put the style of play in us,” he said this season. “We are all used to it now, playing out from the back, being comfortable on the ball, taking the ball under pressure wherever you are on the pitch. That is all starting to have a big influence now.” That kind of education makes him a contender.

LIVERPOOL – Ovie Ejaria
“He’s six foot two, he’s rangy, leggy. He can win balls back and also drive at defences and make things happen,” says Steven Gerrard of a player he has signed on loan from Rangers. If you’re thinking that sounds a little like Gareth Southgate favourites Nat Chalobah and Ruben Loftus-Cheek, then you might well be right. Ejaria would have gone to the Toulon tournament this summer but for injury, and is clearly very much in Boothroyd’s plans. And any player in Boothroyd’s plans in 2018 has a right to be excited about their England future.

MANCHESTER CITY – Phil Foden
“I’m excited by [Phil] Foden and [Jadon] Sancho. I can see a different sort of technical player coming through the system. The way I want to play the game, and what’s needed to build from the back and play through midfield in that, needs a certain sort of technical player” – Southgate, November 2017.

There were some who called for Foden to be considered this summer but the 18-year-old has a grand total of 43 Premier League minutes under his belt, so some people are clearly fools. His time will surely come.

MANCHESTER UNITED – Angel Gomes
“Angel is like Paul Scholes; he can dictate a game with his intelligence,” said Danny Webber of a player who is still only 17 but has captained England at Under-16, Under-17 and Under-18 levels. There are precious few United players in the England youth system, but Gomes could be a genuine gem. Now to see whether he will get a sniff of a chance under Jose Mourinho.

NEWCASTLE – Jamaal Lascelles
Possibly the harshest of all snubs from Gareth Southgate, with even Alfie Mawson getting an England call ahead of Jamaal Lascelles, a Premier League captain at the age of just 24. Lascelles has actually played under Southgate, who has perhaps never forgiven him for the part he played in the end of a 15-match England Under-21 unbeaten run; Lascelles was at the centre of a defence that lost 3-2 to France in 2014 despite Harry Kane giving them a 2-0 lead. There remains a suspicion that Lascelles is too much defender and not enough footballer for Southgate, but surely he should at least give him the chance to prove him wrong.

SOUTHAMPTON – Alex McCarthy
Well, he has been in England squads and he is currently one of only a handful of first-choice English goalkeepers in the Premier League. It’s at this point that you have to remind yourself that yes, both Nathan Redmond and James Ward-Prowse do have England caps. We have been through a massive amount of chaff to get to this quality of wheat.

TOTTENHAM – Kyle Walker-Peters
Six of the eight Englishmen to play for the club in all competitions last season have received international caps. Of the remaining two, Kazaiah Sterling’s season in the first team comprised of two minutes against APOEL Nicosia in December, which leaves Kyle Walker-Peters. He is already an Under-20 World Cup winner and has since graduated to the Under-21s; he needs to make more than nine appearances next season for Tottenham to follow half the Spurs squad into Southgate’s plans, mind. He has recently signed a new contract so he does have a chance.

WATFORD – Nathaniel Chalobah
It was hardly a secret that the name of Nathaniel Chalobah was pencilled in as a World Cup possibility at the start of this season. The midfielder was set for regular Premier League football at Watford after taking the initiative and leaving Chelsea, while Southgate has often spoken highly of the youth international in the past. A serious knee injury suffered in September ended any dreams of Russia, but only diverted his England hopes instead of completely derailing them. He has since trained with England and will surely make his debut early next season. He has a barely believable 40 England Under-21 caps.

WEST HAM – Reece Oxford
“In all my other clubs I worked with before, the young players were very important,” says Manuel Pellegrini so perhaps there is a chance that a young English player can break through at West Ham after all. How Hammers fans would love that to be Oxford, who has twice gone on loan to Borussia Mönchengladbach in search of first-team football. Oxford has an excellent England youth pedigree so he certainly has the right profile for Southgate. But first he must win over Pellegrini or find somebody else who loves him.

WOLVES – Conor Coady
Ah, here is a man who won the European Under-17 Championships back in 2010, before it became fashionable. Of the players who won that tournament, Jack Butland and Ross Barkley have progressed to full England caps, while Chalobah is likely to follow soon. Coady was then a central midfielder but has since been converted into a centre-half so he can certainly pass a ball. It’s a thought…