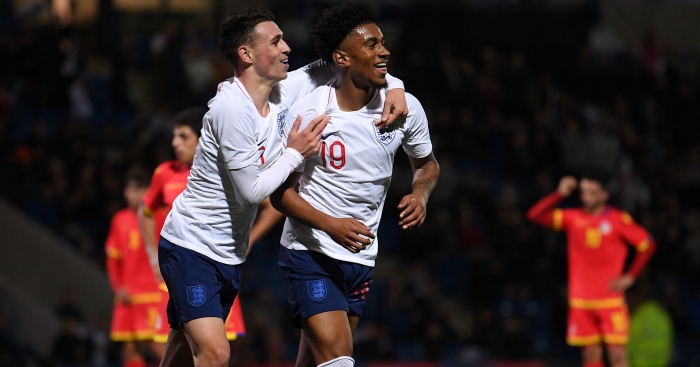 And we’re talking call-ups – not caps. Some players have got the shout since the last time we did this feature in June 2018.

ARSENAL – Reiss Nelson
“I don’t want him to be thinking that he has just got to roll up and he’s the next one, because there is really good competition for places,” said Gareth Southgate in November before Callum Hudson-Odoi rolled up, leapfrogged the Arsenal forward on loan at Hoffenheim and became ‘the next one’. Nelson was hot property when he had scored six goals in seven Bundesliga games but he has not netted since and is now largely restricted to the bench. So with the England Under-21s he remains. Unfortunately for Ainsley Maitland-Niles (our June pick), first-team football has not been quite forthcoming enough, though starts against Manchester United and Stade Rennais will certainly help.

BOURNEMOUTH – Jack Simpson
‘You get the feeling that a run of goals at the right time (scoring four goals in six games in January was simply a waste) could earn him a shout’ was the verdict on Callum Wilson last summer, and so it came to pass. So who is next? Bournemouth are a difficult one to call as most of their established English players are older, while the younger ones simply do not play. And then there’s Jordon Ibe. So we will skip to one-time England U-21 man Jack Simpson, who helped keep Manchester City down to just one goal in a 1-0 defeat earlier this month.

BRIGHTON – Solly March
‘Gareth Southgate has capped 11 centre-halves and yet there is a long list of pretty decent (though crucially not brilliant) English centre-halves who still remain uncapped. One of those is Lewis Dunk,’ we said in June. But now Dunk is no longer uncapped, though he has since lost his place in the England squad to James Tarkowski. So who is next? The smart money is on Solly March, who played under Southgate for the Under-21s in 2015. He has targeted the next World Cup, saying: “It’s a long-term goal more than anything. Obviously it’s something you want to do, play for your country. I’ve got to play consistently for a long period of time before that does happen.”

BURNLEY – Dwight McNeil
Ben Mee can probably give up now; Dwight McNeil is the new kid on the block. The 19-year-old has started the Clarets’ last 12 Premier League games and has been rewarded with England Under-20 call-ups. This week he benefited from the England senior team’s lack of wingers when he took on Danny Rose in senior training. This really has been an unexpected Burnley good news story in a season sadly lacking many.

CARDIFF CITY – N/A
It just ain’t going to happen. We mentioned the name of £11m Cardiff winger Josh Murphy in June but there is literally no chance of any Cardiff player getting the nod ahead of their likely relegation.

CHELSEA – Jake Clarke-Salter
‘This one is pretty much nailed on’ is what we said about Mason Mount in June. And Mason Mount did indeed get the call in October, though he did not actually make his England bow. Callum Hudson-Odoi has now followed him into the England squad, leaving us casting around for an alternative. We arrive at Jake Clarke-Salter, not because we think he is necessarily England class, but because he is established at Under-21 level, and that is starting to mean an awful lot.

CRYSTAL PALACE – Aaron Wan-Bissaka
It really has to be only a matter of time. He is probably England’s in-form right back, but he is probably better served being parked with the Under-21s this week than being third or fourth-choice right-back for England. “Wan-Bissaka is playing very well, and he’s really pushing to be in our squad – there’s no question. I could pick players, give them a cap, and stop them playing somewhere else but I don’t think that’s right,” said Gareth Southgate before promptly calling up Hudson-Odoi and stopping him playing for the Under-21s.

Callum Hudson-Odoi has still not started a Premier League game and has been brought into the full England squad.

Aaron Wan-Bissaka has arguably been the best performing English full-back over the last 12 months.

I’m not overly arsed, I expect it now but how is it fair on AWB?

EVERTON – Dominic Calvert-Lewin
One of five Everton players in the England Under-21 squad, but DCL seems closest to a senior call-up after establishing himself as the Toffees’ first-choice striker. He has scored six Premier League goals this season, with two coming in his last four games. We chose Ademola Lookman in June but his career has largely stalled this season, even though he has shown he can beat a man when he has come off the bench.

FULHAM – Ryan Sessegnon
Hands up, we did not see Marcus Bettinelli’s call-up coming after just two Premier League games. So our Fulham pick remains Sessegnon, though we are rather less bullish than we were in the summer when we declared: ‘The European Under-19 champion has been fast-tracked into the England Under-21s but he is unlikely to stay there for too long if he is half as good in the Premier League as he has been in the Championship.’ He remains with the Under-21s and will surely now need a summer move to make the next step.

HUDDERSFIELD TOWN – N/A
It just ain’t going to happen. And it’s been 50 years since Mike O’Grady.

LEICESTER CITY – Harvey Barnes
We told you Ben Chilwell was a ‘contender’ because he had been capped at pretty much every England youth level, and he is now England’s first-choice left-back. Go us. James Maddison has also been called up (and then lost his place) and so has Demarai Gray. So who’s next? We are plumping for the 21-year-old Barnes, who has started eight Premier League games since arriving back from a loan spell with West Brom. “He has big potential,” says new Leicester boss Brendan Rodgers, who fielded six Englishmen against Burnley on Saturday.

For the second game in a row, Brendan Rodgers started with an all under-23 five-man midfield for Leicester City on Saturday:

LIVERPOOL – Rhian Brewster
It might be an awful long time before we see a new Liverpool call-up as Trent Alexander-Arnold and Joe Gomez were both fast-tracked. Which takes us to past the likes of Ovie Ejaria and straight to Brewster, the former U-17s World Cup winner who has been sidelined for over a year through injury but is now back in full training. “Now he is a proper man. When he got injured, he was a boy. All will be good,” said Jurgen Klopp last month.

MANCHESTER CITY – Phil Foden
‘His time will surely come,’ is what we said in June. We are still waiting but that is absolutely fine. He’s only 18 and he’s doing very nicely, thank you. And unfortunately for him, he is not a winger but an attacking central midfielder, and it’s far harder to give chances to young players in that position. He should have fun with the England Under-21s this summer and hopefully add another trophy to his World Cup. And he is still only 18.

MANCHESTER UNITED – Angel Gomes
‘Now to see whether he will get a sniff of a chance under Jose Mourinho,’ we said in June, knowing full well that there was little chance of Gomes making any progress whatsoever under Mourinho. He had to wait until the appointment of Ole Gunnar Solskjaer to make a Premier League match-day squad for the second time, playing the final minutes of a victory over Huddersfield on Boxing Day. “When you get the chance to put a player out there for 15 minutes at Old Trafford to give him that experience, Angel was, of course, the one I wanted to put on,” said the boss. Gomes is back in the England U-19 squad this week.

NEWCASTLE UNITED – Sean Longstaff
We are reluctantly moving on from Jamaal Lascelles as he really is too much defender and not enough footballer for Southgate, though it must really smart to see James Tarkowski, Lewis Dunk and even Alfie Mawson shove past him in the queue. Instead let’s talk about Longstaff, who might well have picked up an Under-21 call-up if he had not suffered a season-ending knee injury. Poor Longstaff.

SOUTHAMPTON – Jack Stephens
Alex McCarthy and Angus Gunn have both enjoyed England call-ups (if not caps) so there are slim pickings on the south coast, where James Ward-Prowse, Nathan Redmond and Danny Ings are all England alumni of varying degrees. So who’s next? The tempting answer is ‘f*** knows’, but we will play the long game and suggest centre-half Jack Stephens, largely because he was an Under-21 regular under Southgate.

TOTTENHAM HOTSPUR – Oliver Skipp
“I think he played like a 30-year-old man. So relaxed, trying to play forward and trying to give the team what the team needs,” said Mauricio Pochettino after the 18-year-old Skipp became the 13th Tottenham Academy graduate to be given a senior bow under the Argentine. We have pushed him ahead of Kyle Walker-Peters, largely because he has so many excellent right-backs ahead of him for England; nobody is talking about KWP when TTA and AWB are so far ahead of him in the queue. Meanwhile, England are pretty sodding light in central midfield.

WATFORD – Will Hughes
With Nathaniel Chalobah now an England international, we are forced to look elsewhere for our next Hornet/Lion hybrid. And we should look no further than Will Hughes, holder of 23 England Under-21 caps but not a single senior call-up. He has been a key member of a Watford side chasing the seventh place/FA Cup double and was name-checked in September by the England boss. The problem? One goal and three assists is a pretty paltry return from an attacking player.

I really couldn’t care less about all the hype. Hudson-Odoi’s been given so little game time while Will Hughes has started every single game he’s been available for. Especially recently he’s been putting very good performances, yet he’s still not being considered? https://t.co/V46PGIcemb

WEST HAM – Grady Diangana
Finally, it’s no longer Reece Oxford. Mark Noble has watched Declan Rice switch allegiances to England and immediately get the call. And this comes after squad places for Aaron Cresswell and Michail Antonio, which must have hurt the captain, dear captain. Next could be Diangana, who has been called up at England U-20 level and certainly knows how to beat a man.

WOLVES – Conor Coady
Ah, here is a man who won the European Under-17 Championships back in 2010, long before it became fashionable. Of the players who won that tournament, Jack Butland, Ross Barkley and Chalobah progressed to senior caps, while Ben Gibson and Saido Berahino got as far as an England squad. Coady really should be the next centre-half cab off the rank, but are there doubts about his ability to play in a back four? “You’re trying to get into a squad that got to a World Cup semi-final,” said a humble Coady this week. Actually, just edging ahead of Tarkowski would do the trick at this stage.