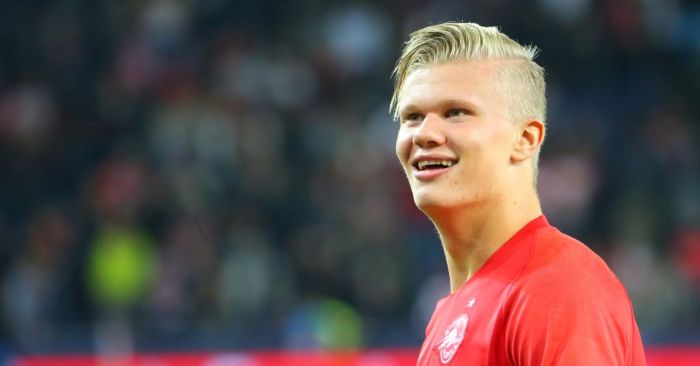 To clarify: these are not signings we think will happen, just rumours we know will surface…

Erling Haaland to Manchester United
Transfer speculation is often rather unimaginative, the result of adding two and two together to come up with as many clicks as possible. So Manchester United being linked with a prolific teenage Norwegian striker does feel rather inevitable.

What did we say about imagination?

United were reported to have sent scouts to watch RB Salzburg face Watten last month, with Haaland scoring one of his 14 club goals this season in a 5-1 win. He already has four hat-tricks in 2019/20, as well as his nine-goal haul in one U20 World Cup game in May. Oh and Solskjaer was the manager who actually signed him, gave him his Molde debut and compared him to Romelu Lukaku before he took over at Old Trafford. Time to strengthen that spine.

Timo Werner to Liverpool
He would not be the only player to use the Red Bull platform to give his career wings. And much like Haaland, Timo Werner is happy for his Champions League exploits to keep him firmly in the public eye.

His first experiences of the competition were not particularly enjoyable. Leipzig have made a habit of stunning the Bundesliga but their European excursions have been less fruitful. Their first seating at the top table in 2017/18 ended with them being ejected by the group stage, with Werner’s three goals essentially coming after the event. His enduring memory will be an all too painful one.

But the 23-year-old is determined to make perhaps his final season at the club a success. Two goals in the opening win over Benfica served as a reminder of the talents of a perennial Liverpool target whose new contract, signed in August, contains a reported release clause of just €30m. That came too late for the Reds to capitalise on in the last window, but January offers a fresh opportunity (even though Liverpool are above squad improvement through transfers).

Vincent Kompany to Manchester City
It could be Milan Skriniar. Perhaps Aissa Mandi will be targeted. Maybe previous interest in Murilo will be revisited. But Manchester City will surely make signing a centre-half their January priority.

Many of their current issues will have subsided by then. Aymeric Laporte is expected to return at some point in early 2020, while John Stones will be back within six weeks. But the former will be wrapped in more than a few cobwebs after long-term injury, while the latter has hardly helped the situation alongside Nicolas Otamendi when fit.

The common refrain is that City were fools not to replace the outgoing Kompany in the summer. His influence off the pitch, as much as on it, has taken an inevitable toll on the squad. So might a temporary return until the end of the season suit all parties? With one win from his first seven games, and three points separating Anderlecht from the relegation zone in the Belgian league, Kompany might need a break from the misery of coaching. The move, incredibly unlikely as it would require an admission of failure from both parties while failing to properly solve either’s problems, will still surely be mooted at some point.

Ruben Dias to Chelsea
Whether Chelsea manage to overturn the remainder of their transfer ban in time for January is a moot point: they will be linked with players regardless. Frank Lampard is already reported to have lined up £124.5m worth of signings in areas the Blues don’t need particular improvements. They clearly don’t take FIFA particularly seriously.

Those persistent full-back rumours do seem strange. Cesar Azpilicueta has been far from convincing this season but Reece James will get his chance. Emerson Palmieri and Marcos Alonso are solid enough options on the other side. It is in the centre where improvement might have to be bought rather than coached.

The 22-year-old seemingly exists purely in transfer gossip columns, primarily to be linked with the Premier League elite. But his valuation of at least £60m will not deter a club ready to blow their load after being starved of action for so long.

Callum Wilson to Everton
Few clubs make as much use of the January transfer window as Everton – though warming their winter cockles with Theo Walcott, Cenk Tosun, Morgan Schneiderlin, Ademola Lookman, Oumar Niasse, Shani Tarashaj and Aiden McGeady for a combined £97m over the past five years is hardly the best advertisement for dipping back into that particular market.

Still, Everton will always Everton. Which means they will be gripped by some sort of existential panic to the point that links with a proven – and expensive – Premier League talent are unavoidable. Wilfried Zaha fit the bill in the summer, but recent events suggest it is Callum Wilson’s turn next.

It does feel a natural progression of sorts for the striker. But Bournemouth would be justified in wanting upwards of £70m for an England international they have shown the utmost patience with. Everton will surely not obliterate their transfer record with such an impulsive and risky mid-season purchase, but scoring two fewer goals than Tammy Abraham will have a funny effect on some people.