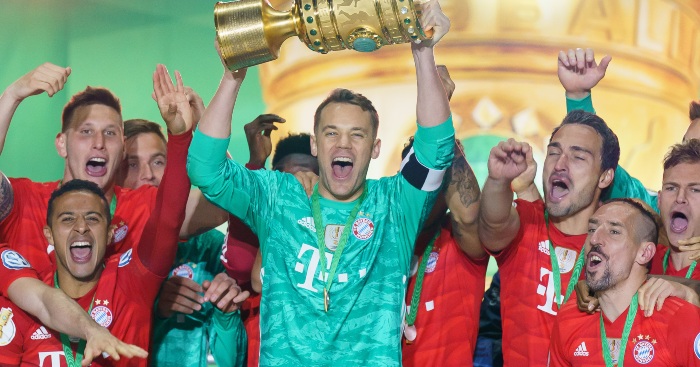 Manuel Neuer is considering leaving Bayern Munich over fears the Bundesliga champions are falling behind their European rivals.

The Germany goalkeeper has two years remaining on his Bayern contract which would take him up to a decade with the club.

In the last eight years, Neuer has won seven Bundesliga titles and the Champions League once in 2013 in addition to the World Cup in 2014.

But the 33-year-old remains ambitious and his agent has suggested that the former Schalke stopper has become concerned by Bayern’s perceived stagnation, having been dumped out of the Champions League by Liverpool last season.

“Manuel is success-oriented. My impression is that the gap to the top four English top teams is already serious and the Munich squad is currently not yet as competitive or set up to tackle Manuel’s goals seriously.

“When he realises that Bayern are responding, then he will probably blossom again.

“He does not want to retire in 2021. Now he is in the phase in which he has to decide: how will things progress in the future?

“Signing a contract extension and ending his career at Bayern is of course the obvious option, but it’s not the only one.”

Bayern have signed Lucas Hernandez and Benjamin Pavard for a total of nearly £100million while they remain keen to sign Leroy Sane following the exits of Arjen Robben and Franck Ribery. Mats Hummels, Rafinha and James Rodriguez have also departed the Allianz Arena.