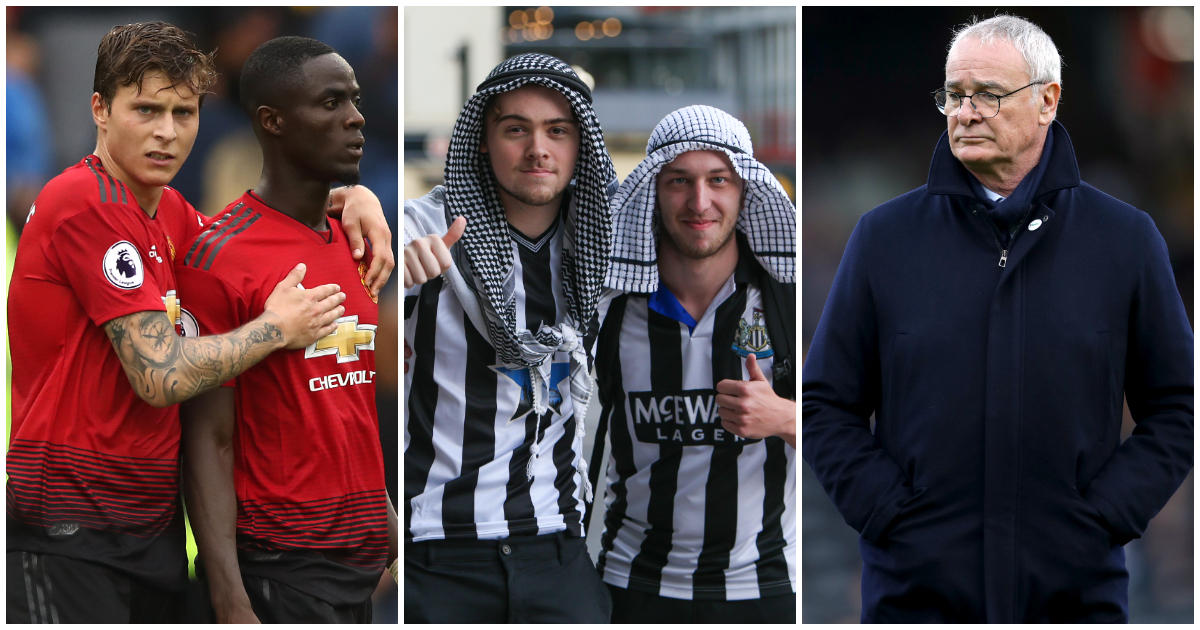 It’s a biggie in Newcastle as the new era starts with the same old sh*te in their XI. Also: Ole starts a crucial period with Victor and Daft Eric…

Game to watch – Newcastle v Tottenham
All eyes on Sunday will be on St James’ Park, which will no doubt be awash with tea-towel clad Geordies proudly waving Saudi flags to welcome their new overlords to Tyneside.

For much of the world beyond the north east, those of us more concerned with upholding human rights than upgrading right-backs, it will be a tough watch to see the new regime worshipped as Newcastle’s glorious savours. Assuming the Magpies can be saved in the short term.

Because for all the money and oil in Saudi Arabia, this Newcastle team is still bobbins. Seven games into the season they are yet to win a match and without being able to change the squad before January, there remains a danger that the Toon could be the richest club in the Championship next season. Which, frankly, would be hilarious.

They can change their manager; at the time of writing Steve Bruce remains in charge, by Sunday he almost certainly won’t be. The new owners can’t have anything spoiling their party and Bruce’s presence on the sidelines would certainly be the turd in the punch for many of the revellers on Sunday afternoon.

Whoever leads Newcastle, they need a swift and dramatic improvement beyond just the new-owner bounce. That’s assuming these players are happy to welcome their new paymasters. For most of them, the Saudis spell a rather more imminent end to their Newcastle careers than they might have anticipated.

Against a Spurs side who stopped their own rot with a much-needed win over Aston Villa before the international break, the Newcastle players need to start stating their credentials to play a part in the new era, even if for the vast majority it is a hopeless cause.

Manager to watch – Claudio Ranieri
Unlike Newcastle, Watford wasted no time in changing their manager. After a dispiriting defeat at Leeds, Xisco Munoz was out and back to the Premier League came Ranieri.

His first match in charge: Liverpool at home. And it doesn’t get much easier. In Ranieri’s first eight games, the Hornets face five of the Big Six, with trips to Leicester and Everton chucked in too.

So the Italian has no time to waste in making on impression on his new side, but Ranieri will have found plenty of reasons for encouragement when he sat down to analyse Watford’s performances before they disappointed at Elland Road.

Ranieri’s pragmatic approach is similar to what Munoz was trying to achieve through the early weeks of the season, with Watford sitting off and relying on their speed on their break, usually via the jet-heeled Ismaila Sarr, to harm their opponents. Sarr and Watford have form for picking off Liverpool, with the Hornets inflicting upon the Reds their first defeat of their title-winning season.

A repeat may be unlikely, but if Ranieri can tweak Munoz’s methods while prompting a new manager bounce, it could be a rather more uncomfortable afternoon for Jurgen Klopp than he might have been expecting.

Player(s) to watch – Victor Lindelof and Eric Bailly
The last thing Ole Gunnar Solskjaer needed as Manchester United embark upon a crucial run of fixtures was the presence of Lindelof and Daft Eric at the heart of his defence like it’s 2017 all over again.

Even then, when Lindelof was signed for £30million a year after Bailly arrived for a similar figure, rarely did they play together as it appears they really must at Leicester on Saturday.

Harry Maguire’s injury was a blow for Solskjaer compounded by the sight of Raphael Varane limping off during the first half of France’s Nations League victory over Spain. Maguire’s return date is unclear; Varane will be missing for ‘a few weeks’.

In which time United face the Foxes, Atlanta twice and Liverpool next weekend, when Mo Salah and his pals will be salivating at the prospect of coming up against a couple of stand-ins.

Maguire may well be back for Liverpool’s visit but Solskjaer can’t look beyond the threat of Leicester, who might have started the season in stodgy fashion, but Jamie Vardy will be gasping to get at a shoddy centre-back pairing protected by a sub-standard screen. That prospect could well see Solskjaer switch to a back three at the start of a period which could define his Old Trafford reign.

Team to watch – Chelsea
The Blues may be top of the table but before the international break they were floundering somewhat.

Consecutive defeats to Manchester City and Juventus, and the manner of them, gave Thomas Tuchel plenty to ponder. They looked to be heading for similar disappointment against Southampton before James Ward-Prowse was sent off and two late goals earned Chelsea a much-needed three points.

So it is perhaps not the ideal time to be going to Brentford on Saturday evening for a west London derby of sorts. The Bees have already bloodied the noses of some of the big boys, with Arsenal beaten and Liverpool held at the Brentford Community Stadium.

Chelsea, at least, have been resolute defensively, but their back three, assuming Tuchel sticks with a centre-back trio, will be sorely tested by Ivan Toney and Bryan Mbeumo. And with Thomas Frank’s own wing-backs set to push back Tuchel’s then Chelsea urgently need an improvement through the middle to increase the supply line to Lukaku.

EFL game to watch – Swansea v Cardiff
The Championship serves up a mouthwatering appetiser for Sunday afternoon’s Premier League double-header in the form of the south Wales derby.

It’s 19th hosting 20th at Swansea but the two sides seem to be on opposite trajectories. Russell Martin is stamping his mark on the Swans, who have lost one in six. Admittedly, they’ve won only once in the same period but the mood around the Liberty Stadium is generally positive.

It will turn more raucous this weekend when Cardiff come to town. The Bluebirds are struggling to take flight, with Mick McCarthy’s men having lost their last five games. A derby defeat, especially if Swansea embarrass Cardiff, could be the end for Big Mick.

There’s another Championship derby on Saturday, when Fulham and QPR battle for west London bragging rights at the same time Watford are taking on Liverpool.

European game to watch – Bayer Leverkusen v Bayern Munich
The Bundesliga is currently offering the illusion of competitiveness, with Leverkusen and Bayern neck and neck at the summit before they meet at the BayArena on Sunday.

It was a similar story last season when Leverkusen topped the table after going unbeaten through the first 12 games of the campaign. Then Bayern turned up, Bobby Lewandowski scored an added-time winner, and normality was restored. Bayern went top and Leverkusen slid so dramatically that it cost Peter Bosz his job.

There is more confidence, though, in Leverkusen maintaining their early-season form under Gerardo Seoane. Especially while Florian Wirtz continues to dazzle. The teenager has scored four goals and assisted another five in just six Bundesliga appearances.

Elsewhere on the continent this weekend: a wounded PSG side host Angers on Friday night; while Sunday evening offers a choice of Juventus against Roma, or Barca versus Valencia.