Dennis Bergkamp and Marc Overmars. These were truly glorious times for football. 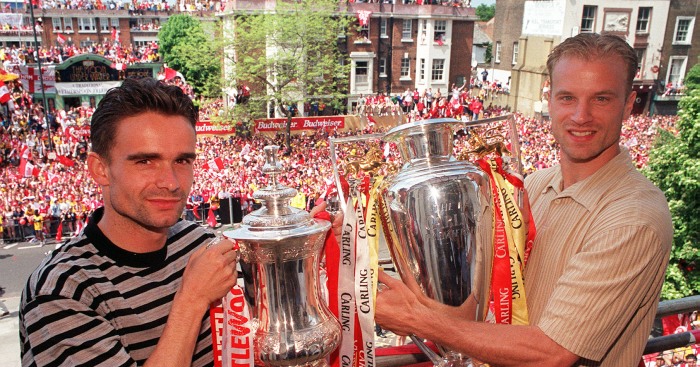 Goalkeeper: David Watson
Barnsley’s promotion to the Premier League in 1997 marked the club’s first appearance in England’s top flight, with the achievement becoming the second greatest feat in Barnsley’s history (they did win the FA Cup pre-First World War you know). Local lad David Watson had come through the youth system at Oakwell and had the chance to impress at Premier League level after being tipped as a future England goalkeeper in the early nineties. The area certainly had form for producing international quality ‘keepers with David Seaman, the incumbent England No. 1 of the time, a Yorkshire-born lad.

Barnsley had been on the brink of relegation to the third tier only a few years prior to their maiden Premier League campaign and managed to bloody a few noses, including knocking reigning Premier League champions Manchester United out of the FA Cup. However, the Red Devils thrashed them 7-0 in the league with Watson becoming accustomed to picking balls out of nets during the season. The Tykes suffered several heavy defeats during the campaign and ended up conceding 82 goals; the previous season no team had let in more than 60. The club finished in 19th, five points from safety, and despite a valiant effort it was hardly a dream season for the hometown hero.

Right-back: Dan Petrescu
Chelsea made further strides towards the top of the Premier League table in the 1997/98 campaign and looked to be in title contention until an awful February set them back, with the London side eventually finishing in fourth. The team faced disruption off the pitch as boss Ruud Gullit fell out with club chairman Ken Bates and left; Italian striker Gianluca Vialli replaced him as player-manager, with Dan Petrescu getting the new boss off to a good start by scoring the decisive goal in the League Cup semi-final against Arsenal. Chelsea went on to win the final and also emerged victorious in the Cup Winners’ Cup, with Petrescu scoring twice in a resounding 7-1 win over Tromso en route to the final. The Romanian international was then part of the all-blonde national squad at the 1998 World Cup and scored a last-minute winner against England in the group stage.

Centre-back: Tony Adams
Having bravely gone public with his personal problems in the 1996/97 season, Arsenal skipper Tony Adams faced a huge challenge if he was going to be able to continue at the club in his veteran years and acclimatise to the modern methods of Arsene Wenger. It couldn’t have gone much better as Adams captained Arsenal to a maiden Premier League title and the club’s first top-flight crown since 1991. Fittingly, Adams scored the team’s last league goal of the season in early May and it proved to be a title-clinching one as the victory against Everton crowned them champions.  Later that month the A-Team star led out the side in the FA Cup final and lifted the trophy after a 2-0 win to complete the double. It marked the second time Arsenal achieved that feat, having previously won the league and FA Cup in 1971.

On this day in 1998, Mr @Arsenal Tony Adams scored this goal against Everton. Was this his best moment for the club?https://t.co/rtmy9MexYw

Centre-back: Gerry Taggart
The 1997/98 season was meant to be the dawn of a golden era for Bolton Wanderers at a new modern ground, having won promotion to the Premier League in their last season at the historic Burnden Park stadium. After over 100 years at their old home, Bolton played their first game at the Reebok Stadium in the September of ’97. A 0-0 draw against Everton was hardly befitting of such a notable event in the club’s history but the match was not without incident as home fans were left incensed at referee Stephen Lodge’s decision to rule out a potential Gerry Taggart winner. Replays showed the Northern Irish international’s header clearly crossed the line but VAR was a distant dream (or nightmare). The lost points proved crucial come the end of the season as Bolton were relegated on goal difference, finishing level on points with the side in 17th but conceding just five more goals. The team in question? Everton of course.

Left-back: Stuart Pearce
Golden oldie Stuart Pearce fitted in well with Newcastle’s transfer approach at the start of the 1997/98 season as he arrived at St. James’ Park alongside fellow veterans John Barnes and Ian Rush. Magpies manager Kenny Dalglish made wholesale changes at the start of his first full season in charge of the club and looked to his trusted old Liverpool colleagues to help the side make the final step to becoming Premier League champions after finishing as runners-up to Manchester United two years running. Despite reaching the FA Cup final, the season was a disaster for Dalglish and his side as they finished 13th. Pearce improved the defence but with star striker Alan Shearer out injured for a large part of the campaign the team looked short on goals with the 36-year-old Rush barely playing and Danish great Jon Dahl Tomasson struggling with the burden of expectation.

Right wing: Attilio Lombardo
Crystal Palace returned to the top flight for the 1997/98 campaign hoping it would be third time lucky, having suffered relegation in both of their previous Premier League seasons. Palace watched in awe at Ruud Gullit’s foreign revolution at London rivals Chelsea, as the D-Team’s Roberto Di Matteo, striker Gianluca Vialli and the unsurpassable magician Gianfranco Zola created a new era at Stamford Bridge. The Eagles decided to bring a little bit of Italy to Selhurst Park by signing Attilio Lombardo from Juventus, hoping that a proven international and Serie A winner could keep them in the league. Lombardo was a hit but despite a decent start he couldn’t inspire the team to survival, even after taking the position as player-manager late in the season alongside Leeds United legend Tomas Brolin. Palace finished bottom of the pile and wouldn’t return to the Premier League until the mid-noughties.

ON THIS DAY: In 1997, Attilio Lombardo scored the winner for Palace against Wimbledon. pic.twitter.com/ig1Ha6qz1P

Central midfield: Roy Keane
After four Premier League titles in five years, Eric Cantona left Old Trafford as perhaps the most influential player in Premier League history. The Frenchman’s iconic shirt number was taken by rising star David Beckham and there was only one logical choice to fill the position of club captain. Midfield general Roy Keane had an irrepressible demand for excellence from his team-mates that suited manager Alex Ferguson’s hunger for continued success and all seemed to be going well for the new skipper until he suffered a season-ending injury in September ’97 against Leeds United. Alf-Inge Haaland was playing in white that game and unwisely accused Keane of faking the injury, something that the Irish legend wasn’t going to forget in a hurry. The Red Devils ended the season trophy-less in his absence.

Central midfield: Paul Ince
Manchester United could have done with former player Paul Ince covering in midfield after Keane’s injury but the London-born star had made the controversial move to Liverpool by that time. United fans were left stunned that a hero of their first double-winning side had made the bold move to Anfield, with only a dozen or so players having represented both clubs due to the enormous rivalry between the English giants. Liverpool fans remained sceptical even after Ince scored on his home debut in a defeat to Leicester City but his dogged determination did win the majority of supporters over during the season. The team’s indifferent start to the campaign hindered their title challenge as they eventually finished third, 12 points adrift of Ince’s former club.

Left wing: Marc Overmars
Arsenal’s purchase of Dutch winger Marc Overmars initially attracted some criticism as his inconsistent form in late 1997 created doubts as to whether he was worth the sizeable fee the club had paid Ajax. By the end of the season those concerns had evaporated, with Overmars having produced the goods in two key moments as Arsenal won the Premier League and FA Cup. The Gunners travelled to Old Trafford in March 1998 needing a win to keep the pressure on league leaders Manchester United and with just over ten minutes remaining in the match Overmars calmly slid the ball past Danish legend Peter Schmeichel to win the game and send his side towards a Premier League title. A couple of months later he scored the opening goal against Newcastle United in the FA Cup final, a dream finish to his debut season in England.

Forward: Dennis Bergkamp
Bergkamp was at his brilliant best from the off in 1997/98 season, scoring a stunning hat-trick against Leicester City in August. Despite trailing Manchester United for the majority of the campaign, the Dutchman’s excellent form helped the Gunners remain unbeaten from Christmas until they won the title in May ’98. His vital contribution was recognised at the end of the season as he won the PFA and FWA Player of the Year awards. Bergkamp suffered some disappointment at the end of the campaign as injury forced him out of the FA Cup final but he recovered in time for the 1998 World Cup in France, where he scored an outstanding late winner against England’s conquerors Argentina in the World Cup quarter-final.

Forward: Michael Owen
Owen burst onto the scene as a teenager in the 1997/98 season, winning the PFA Young Player of the Year and sharing the Golden Boot with fellow countrymen Dion Dublin and Chris Sutton. However, when it came to making England’s 1998 World Cup squad Owen edged ahead of his top-scorer contemporaries, despite his lack of experience. He made the most of his opportunity, becoming a nation’s new great hope with his stunning solo goal against Argentina as England suffered a heartbreaking second-round exit.

Earlier in the year, Owen became one of England’s youngest ever players after making his debut in mid-February and scored his first ever hat-trick for Liverpool just days after in a 3-3 draw with Sheffield Wednesday. His goals proved vital for his club as Merseyside-born Robbie Fowler went down with injury during the season and missed out on the chance of a World Cup debut himself.