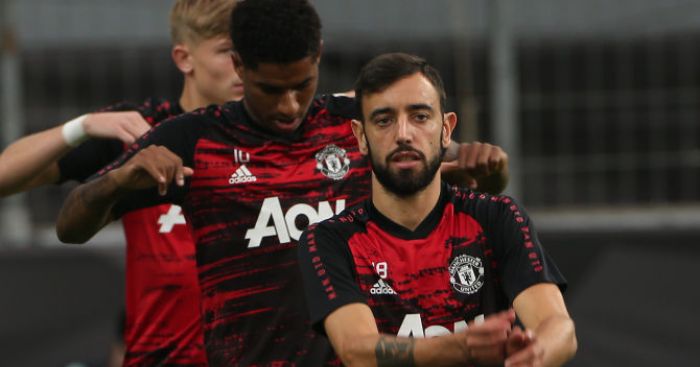 One of our eight writers backs Manchester United to win the title. A couple see big things on the horizon for Bruno Fernandes and Timo Werner.

As is traditional, tell me who will win the league.

Sarah Winterburn: Liverpool. I am not entirely convinced but I remain irrationally annoyed at Man City for last season.

Daniel Storey: Manchester City, for probably the fourth year in a row. Liverpool will suffer a slight slump after chasing non-stop for two years and Pep Guardiola has something to prove domestically for the first time in three years.

John Nicholson: The endurance levels needed means this will be the season of the carthorse rather than the racehorse. This puts Manchester City and Arsenal out of the race. Pep’s last season will be unremarkable due to massive and persistent injuries, regardless of whether Kalidou Koulibaly arrives or not. Getting a new Chelsea side to gel instantly seems unlikely. Liverpool were running out of steam for the last third of the season and are surely not going to put the pedal to the metal for a third season. Spurs are still Spurs.

That leaves Manchester United. As mad as it seems, I’m tipping them to win it simply because they’ve got the most carthorses, crucially, the deepest pockets to buy the deepest squad and because it’ll be a title won with 82 points, so they can still be a bit rubbish.

Will Ford: Manchester City. This season will be a huge test of squad depth and Liverpool’s is incredibly shallow. Chelsea won’t be miles off.

Dave Tickner: I genuinely don’t know why the team that won by 18 points last season aren’t favourites. So, them I guess.

Ian Watson: Pep may have a point to prove but I’m not convinced yet that City have done enough to close the massive gap on Liverpool. That said, I can’t see Jurgen Klopp teasing a similar season out of the same players at Liverpool. Much depends on what happens before the deadline but if you must know…Liverpool.

And the rest of the top four, in order. Which nobody ever gets right.

SW: Manchester City, Manchester United and Arsenal. One of these days I am going to be right about Arsenal’s glorious return and this feels like the perfect time.

DS: Liverpool, Chelsea and Manchester United. But it’ll be much closer between all four clubs this season.

WF: Liverpool, Chelsea, Tottenham. Mourinho will win a trophy for Spurs as well, by the way.

IW: City, Manchester United, Chelsea. Though it could be in any order.

SW: Fulham are f***ed and I will add Aston Villa and Newcastle to that list. Yes, Newcastle.

MS: Much as I love them, Brighton. Slaven Bilic has won two of his last 11 Premier League games so West Brom. And Fulham.

JN: WBA. No goals in ’em. Brighton. It will happen some time, why not now? Fulham. And it’ll make poor Scotty cry.

WF: Fulham, Aston Villa and West Ham. Grady Diangana to score the winner for West Brom in their penultimate game of the season to keep the Baggies up and send the Hammers down.

IW: Again, much depends on the next month. I can’t see Fulham being comfortable and I fear for West Brom without some savvy recruitment. Villa might not be so lucky again, but in Ollie Watkins they have signed a goalscorer and they should be OK. West Ham are a sh*t show and only for so long can they get away with it. So Fulham, West Brom and West Ham.

Which club will be a pleasant surprise?

SW: Southampton and Brighton for a south coast top-half double.

MS: Crystal Palace will finish in the top ten despite a fair few tipping them for relegation and Uncle Roy will take a dump in Harry the Hornet’s head gear to celebrate.

DS: Southampton, if that even counts. I think that they might even finish in the top eight.

JN: Would it be a surprise if Leeds United were very entertaining and took a few big scalps? Possibly not but I expect some bonkers bucket-based Bielsa-isation of the Premier League.

WF: I’m not sure Southampton are a surprise, so I’ll go with Newcastle. Allan Saint-Maximin, Callum Wilson and Ryan Fraser will give the Toon army something to smile about.

DT: Not sure how much of a surprise it would be, but I reckon Southampton will be best of the rest.

IW: Define ‘pleasant’. I’d say Leeds but most people expect them to be just fine in the Premier League. Newcastle? They seem to have recruited rather bloody well even without the Saudi cash.

JW: Southampton. Ralph Hasenhuttl led them to a strong end to the season and, if they can add a couple more signings before the deadline, then expect a European push.

Who will win the Golden Boot?

SW: Harry Kane. Even though Spurs will finish eighth.

MS: Timo Werner. Tammy Abraham scored 15 Premier League goals for Chelsea last season without Kai Havertz and Hakim Ziyech in and around him.

DS: Slightly rogue pick maybe, but Anthony Martial. Tenth favourite seems odd given that he was six off top last season and will presumably play as the central striker all season.

JW: Pierre Emerick Aubameyang. Arsenal may not break into the top four but expect the Gabon international to scoop the Golden Boot scoring 50% of their goals.

Which new signing will have the greatest positive impact?

SW: I am opening myself up to derision, but I think Willian will have one excellent season.

DS: Kalidou Koulibaly if it goes through, but that’s not done yet so I’ll say Allan at Everton. They desperately needed a midfield ball-winner.

JN: Of course, it should be James Rodriguez, but Everton have made good players not so good before. Ollie Watkins may well help Aston Villa be less Aston Vanilla, but if Leeds sign Julian Draxler that’ll launch them into a top-ten finish.

WF: Can I say Timo Werner again? Yes, I can.

DT: Timo Werner should give Chelsea something they have lacked for ages.

IW: Chelsea’s attack is stronger across the board but Timo Werner will stand out just by putting the ball in the net.

And which one will turn out to be a massive flop?

SW: One of Chelsea’s signings will flop and I am inclined towards Kai Havertz just because he has a slightly sulky face.

MS: Fulham are going to start the season with Anthony Knockaert as their most expensive signing of the summer despite the fact he can only exist outside of the Championship for so long.

DS: He’s obviously a decent player, but £50m should get you an all-singing, all-dancing full-back and I don’t think Ben Chilwell is that. I’m also averse to clubs signing injured players.

JN: It’s a bit predictable to say James Rodriguez, but James Rodriguez. It seems ages since he was the fine Colombian and made tonight a wonderful thing.

WF: Would say Ben Chilwell, but not sure a left-back can be a ‘massive’ anything. Never been convinced by Nathan Ake; £41million seems like a lot.

DT: Desperately hope I’m wrong, and I usually am which is encouraging, but James Rodriguez.

IW: I worry for Gabriel Magalhaes as a Premier League new boy in the heart of Arsenal’s defence with no competent, experienced partner to show him the ropes. And I can’t see Rodrigo getting double figures for Leeds. Now watch him turn into Ronaldo…

JW: Ollie Watkins. He impressed everyone who watched the Championship last season but the weight of expectation could get to him at Villa. He’ll be expected to score at least 10-15 goals to pay back the £28m fee.

Who will be the biggest bloody bargain?

SW: Getting James for £20m is going to be quite the ride for Everton. That’s undeniably cheap.

MS: Dani Ceballos will pick up precisely where he left off. In terms of permanent deals, Nathan Ferguson.

DS: Mohammed Salisu. An absolute steal at less than £11m. Bigger clubs will bid bigger money a year from now.

JN: Ryan Fraser on a free should help Newcastle’s attempts to crack the top 13.

WF: Thiago Silva. The captain of the Champions League finalists for free.

DT: A right-back who isn’t Serge Aurier is quite literally priceless for Tottenham, which makes £15m for Matt Doherty the best value transfer in history. That’s just maths.

IW: Free is cheap and Ryan Fraser is a very good signing if he can forget last season ever happened and somehow rediscover his previous form. But I’ll say Callum Wilson because he’s an enormous upgrade on the previous Newcastle centre-forward. But so too would be a lamppost.

JW: Adam Lallana. Will bring a shed load of ability, assists and experience to Brighton, as long as he stays clear of injury.

Who will be named the PFA Player of the Year?

SW: Sadio Mane will have a doozy of a season before buggering off to Spain.

DT: Always like to be contrarian and controversial, so I’ll say Mr Kevin de Bruyne.

SW: Seriously cannot see David Moyes still being in charge in November; the only reason I haven’t tipped them for relegation is that I assume he will be long gone.

MS: I think we’re probably at the stage where West Ham sack David Moyes and try to replace him with David Moyes. Or maybe Brighton will panic after a tough opening month.

DS: David Moyes has come into favourite, but it’s Uncle Roy for me. Palace took 22 points from their last 23 league games, and they have a horrible first four fixtures.

JN: Dean Smith is all out of capital. A bad first month and the boy is offski.

DT: Not sure he’ll be first, but the value pick is Brendan Rodgers assuming, as I think we must, that Leicester are committed to continuing their baffling policy of following Tottenham’s Spursy blueprint one year on. Saver on David Moyes for extremely obvious reasons.

SW: Real Madrid and Zinedine Zidane will be back to triumph again.

DS: I can’t look past Bayern Munich. Utterly brilliant last year, and they’ve signed the best natural winger in the world. Keep – or replace – Thiago Alcantara and they’ll retain it.

JN: Given the very small field from which the winner can realistically come, Bayern Munich.

WF: Bayern Munich were so far ahead of everyone else this year, I can’t see anyone coming close to their level.

DT: The Lyon shambles to finally convince Guardiola to stop pissing about and second-guessing himself in Champions League knockout games and just win them instead. City winning a tournament they were initially banned from is also good #narrative.

IW: Manchester City. It probably has to happen sometime.

JW: Went for Juventus last year… hmm, going to go for Manchester City. They have to win it at some point, surely…

In five words (FIVE, Dan), tell us what you are most excited about this season.

MS: The sweet release of death.

JN: The collapse of football’s ecosystem.

WF: Magic of the FA Cup.

DT: Every game being on television.

IW: Harrogate Town in the EFL.