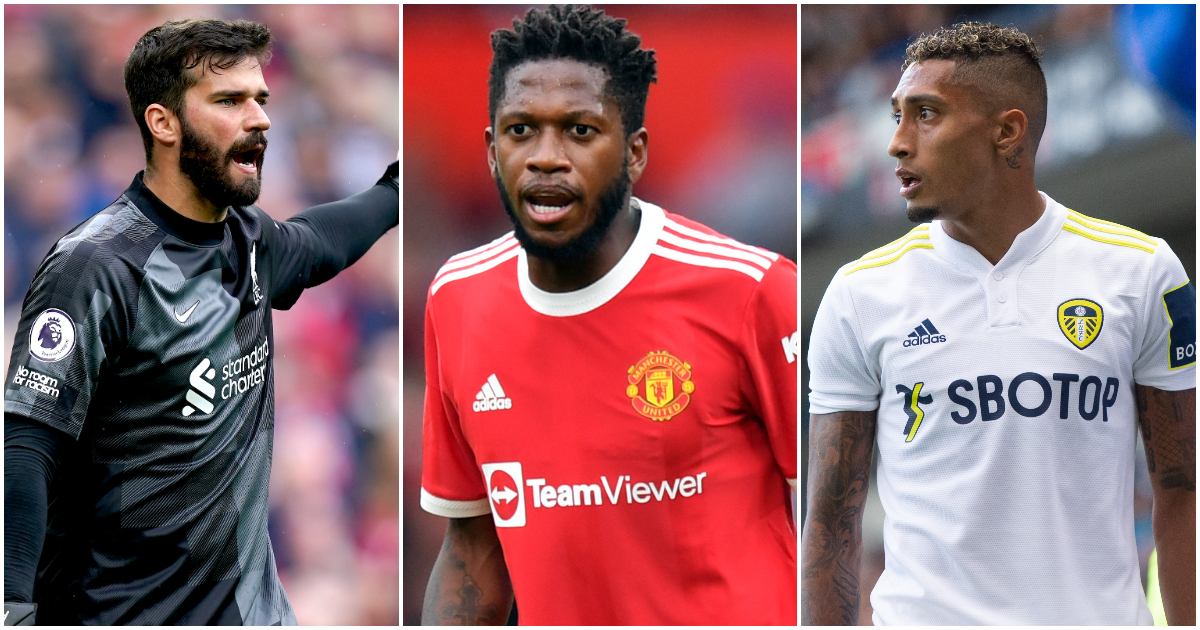 You’ve probably heard, but there are going to be a few players missing from the Premier League this weekend unless/until FIFA cave in.

We’ve put together a team in an absurdly attacking 3-4-3. We’re not worried. Fred can hold the midfield together no bother.

GK: Alisson (Liverpool)
An absurdly strong area for our hypothetical team of people who can’t play with Alisson edging out Manchester City’s Ederson and Aston Villa’s Emi Martinez in a top-drawer list of ineligible keepers this weekend. Those two can fight over a spot on the bench. Tough gig.

CB: Thiago Silva (Chelsea)
Chelsea’s veteran defender is another member of the Brazil Eight. Has only managed 45 minutes of Premier League action so far this season, but it was a 45-minute period that could be worth an awful lot come the end of the season after helping a reshuffled and one-man-light Chelsea take a point at Anfield.

CB: Cristian Romero (Tottenham)
Tottenham’s new signing is yet to start a Premier League game for his new club and won’t do this weekend as he is in quarantine having travelled with Argentina and got himself caught up in all that Brazil kerfuffle there. Indeed, if Romero continues to be involved in Argentina games across the next couple of international breaks it’s hard to see when he’ll actually be able to play for his new club around assorted spells in quarantine. Certainly this weekend Spurs could really do with him because…

CB: Davinson Sanchez (Tottenham)
…One of the players keeping Romero out of the side is also now unavailable having defied the club’s wishes and gone off to play for Colombia against Bolivia and Paraguay and thus also finds himself facing a spell in quarantine.

RM: Raphinha (Leeds)
This was a bad time to get your first ever full international call-up really. I mean, well done, it’s deserved reward for all the good work and such. But seriously, the timing is all off, mate.

CM: Fred (Manchester United)
Manchester United are set to appeal Fred’s five-day FIFA ban in the hope of getting it extended to 10 days. Hahahahahaha. What a good joke that is. In all seriousness, though, he’s actually not that bad and United are better off having him available all things considered. But that is also less funny.

CM: Giovani Lo Celso (Tottenham)
Another one of those naughty Argentinians publicly shamed on the pitch for their quarantine-busting antics in Brazil. Has been on the fringes of things at Spurs this season and, as with Romero, it’s hard to see how that changes over the next few months if he plans to continue going on international duty.

LM: Emiliano Buendia (Aston Villa)
This is a very attacking team. It’s gone full Ossie Ardiles. We’re surely asking far too much of Fred and Lo Celso here. It’s lucky this team is fictitious really, but they would be great fun to watch before their fictitious results went fictitiously south and the fictitious manager got the fictitious sack and fictitious Sam Allardyce was brought in to avoid fictitious relegation.

RF: Gabriel Jesus (Manchester City)
Has been very involved in City’s pair of thumping Premier League wins over Norwich and Arsenal since their now-traditional failure to launch at Tottenham. It doesn’t bear thinking about where City would be without him; they might only, for instance, have beaten Arsenal 3-0 or something. Humiliating doesn’t begin to cover it.

CF: Roberto Firmino (Liverpool)
Liverpool’s Brazilians being banned but Everton’s Brazilian being fine to play is just the sort of thing football fans take with the calm good grace we’ve come to expect from them over the years. Just one of those things. Fairly sound reasons behind it. Certainly not part of some grand shadowy conspiracy to hobble your team. Now to have a big sip of coffee and head over to the internet.

LF: Son Heung-Min (Tottenham)
A calf injury was enough to keep Korea’s superstar out of a World Cup qualifier against Lebanon and see him return to Spurs for treatment. Now we’ve seen Son return from these kind of international break niggles swiftly before, so it’s probably even more likely that he rocks up to play at Palace on Saturday than it is for all the Brazilians to get their bans quashed. And that’s pretty likely.