Home F365 Features One per Premier League club: The academy boys that got away 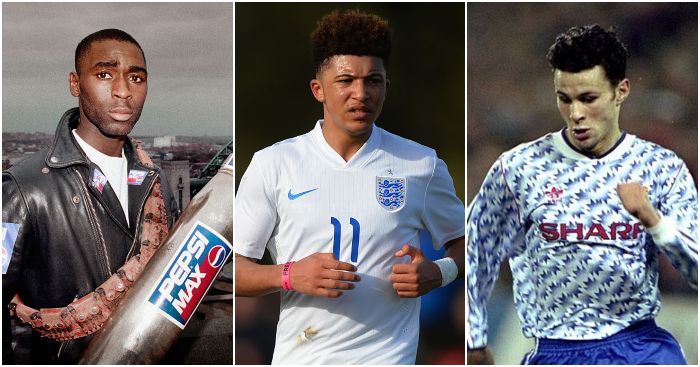 ARSENAL: Andy Cole
This is what Paul Merson said about George Graham’s decision to sell a striker who would win the Golden Boot with Newcastle and five Premier League titles with Manchester United after just two substitute appearances for Arsenal: “It was out of him and Kevin Campbell. It was out of them two and George chose Kevin, who still did brilliantly at Arsenal. He let Andy go. He went to Bristol City, where he ripped it up; then Newcastle, ripped it up; then Man Utd, ripped it up. I thought it was a bad decision. I thought he was a better player than Kevin Campbell if I’m being honest.”

ASTON VILLA: Daniel Sturridge
“Please don’t take your son, he’s happy here,” is what former Aston Villa chief Bryan Jones said to the 13-year-old Daniel Sturridge’s father when he left the club to take up a scouting role at Coventry. Of course he took his son with him and Villa took Coventry to the Premier League’s ‘poaching committee’ but found them unsympathetic. “It was extremely frustrating because Daniel was outstanding,” remembered Jones years later. He really was.

BOURNEMOUTH: Adam Lallana
Spotted by a Southampton scout in September 2000, Saints handed their south-coast rivals a total of £18,000 for Adam Lallana who, at 12, had already mastered the Cruyff turn. The Cherries received approximately £4m 14 years later when the midfielder completed his move to Liverpool. Talk about playing the long game.

BRIGHTON: Gareth Barry
This one still smarts. Hastings-born Barry had trained for six years with Brighton but then refused to sign a YTS deal after being approached by Aston Villa along with Michael Standing. A tribunal ordered Villa to pay £150,000 immediately, rising to a maximum £1.025 million if he made 60 first-team appearances and was capped by England, along with 50% of any sell-on fee. It’s fair to say that those clauses were met.

yeah but what a home-grown player Gareth Barry was. For Brighton. Or should have been

BURNLEY: Lee Dixon
We genuinely did not know this but legendary Arsenal right-back and Manchester City fan Dixon’s first senior appearances were for Burnley; he was destined to fail there as the first-choice right-back was the established Brian Laws and he was not for budging. Dixon made a grand total of four appearances for the Clarets before he was given a free transfer to Chester City. Four years later he was at Arsenal and another two years later he was an England international.

CHELSEA: Declan Rice
“I was released by Chelsea at 14 years old. I remember it, a Tuesday night. On the Wednesday I was training with Fulham, five minutes from my house, and then on the Thursday I was training with West Ham. After one session at both clubs they both wanted me. There was interest from other clubs as well but I made the switch to West Ham. I had to change house, change school, so it was a massive decision – and it’s paid off.” It paid off so well that Chelsea are reported to be interested in bringing him back. The silly buggers.

CRYSTAL PALACE: Stephen Hunt
Having been brought to England from Ireland by Steve Coppell, Hunt was then rejected by his Palace successor Alan Smith. “I’d won my first Republic of Ireland Under-21 cap the previous night,” Hunt told the Guardian. “I flew into Gatwick, got a taxi to Palace’s training ground and I was buzzing. Then Alan Smith said he wanted to see me and, bang, within 10 minutes I’d been released. I hated him for a long time after that.” Hunt was driven to prove Smith wrong and played five full seasons in the Premier League for Reading, Hull and Wolves.

EVERTON: Eric Dier
“If I am completely honest, I absolutely… I didn’t hate it but, at the time, I just thought: ‘Get me out of here.’ It was so different to what I was used to. The lifestyle, the weather, the place, the people…even the language was a factor. The scouse accent was tough for me. And, in football terms, it was a lot more aggressive,” said Eric Dier, who nevertheless signed on for an extra 12 months in Everton’s Under-18 and reserve sides after being sent to Merseyside by his father for a “kick up the backside”. Academy boss Alan Irvine liked him. Manager David Moyes liked him. But the “50% Portuguese” Dier returned to Sporting Lisbon.

LEICESTER CITY: Sam Clucas
Would he get in Leicester’s midfield now? Absolutely not. But Leicester would surely have liked a slice of the £15m paid by Swansea to Hull for the midfielder after an impressive first season in the Premier League. But the Foxes had released him at the age of 16 because he was too short. As he is now 6ft 2ins, that seems in hindsight like an error. As does spending £15m on a distinctly average midfielder, to be fair.

LIVERPOOL: Dave Watson
A member of our Merseyside XI, Everton stalwart Watson could have been playing for Liverpool had he not been sold at the age of 19 before he had played a single game for the Reds. Those of you wondering whether the determined but limited Watson would have ever had a career at Liverpool should think about the fact that Graeme Souness signed one Torben Piechnik. Oh and Dave Watson > Gary Ablett.

MANCHESTER CITY: Ryan Giggs
The young Ryan Giggs was playing for Manchester City’s youth sides as part of their Centre of Excellence when he was spotted and persuaded to join his boyhood heroes instead. “We always had a few scouts who claimed they were the one who discovered Giggsy,” Ferguson said years later. “They probably did, but they never acted on what they saw. It was actually a steward who first told me it was a disgrace that this Manchester United fan was training down the road at City.” Ferguson himself turned up at Giggs’ house on his 14th birthday with a two-year schoolboy deal. Happy birthday, Ryan. Bad luck City.

MANCHESTER UNITED: Dwight McNeil
“He took it hard when he got released from Manchester United, and the reason they gave him up was that he wasn’t very good at set-pieces,” said McNeil’s old PE teacher when discussing Burnley’s best player last year. Now Manchester United are being linked with a big-money move for the player they released at the age of 14. Of course, Paul Pogba would have been on this list four years ago so United should probably approach with a degree of caution.

Dwight McNeil: ‘It was character-building to be released by United’
– Interview by @paulwilsongnm https://t.co/Kt9o5tOlZp

NEWCASTLE UNITED: Fraser Forster
It remains astonishing that Forster was on Newcastle’s books for seven years and never made a single appearance for the club, going on loan to play League One and then SPL football before leaving for Celtic for £2m. Two years later, he was sold to Southampton for £10m at a time when Newcastle were playing Jak Alnwick and Rob Eliot in goal. He has always spoken warmly about the opportunities handed him by Newcastle…but never actually playing for his boyhood club must hurt.

NORWICH CITY: Angus Gunn
‘Son of’ but he never intended to be a goalkeeper, until at the age of eight the keeper went down injured. “I went in goal, and ever since then I have been a goalkeeper. It just naturally happened. One of the coaches probably said I was better in goal than out on the field. These things happen – and it has turned out really well.” But it didn’t turn out quite so well for Norwich, who lost Gunn at 15 to Manchester City for a tribunal-decided £250,000. A loan spell back at the Canaries was a nice touch but they didn’t receive the £13.5m Southampton paid for his services at the end of it.

SHEFFIELD UNITED: Aaron Ramsdale
While Dominic Calvert-Lewin played 11 times for Sheffield United before moving to Everton and David Brooks had one good season in the Championship, keeper Ramsdale – at the club from the age of 15 – played only two FA Cup games for the Blades before moving to Bournemouth for a fee of around £1m. “I sold him an hour before I got married on transfer day, he tried to balls that up,” said Wilder. “I got married in London and myself and the chief exec sold him to Bournemouth and then when that got done within an hour I was married.” Wilder said he had no regrets in August, but will he feel the same when Dean Henderson goes back to Manchester United?

SOUTHAMPTON: Tyrone Mings
The Saints have produced Alex Oxlade-Chamberlain, Theo Walcott, Gareth Bale, Luke Shaw and Calum Chambers in recent years but all played more than a handful of games for the Saints before they were sold. But one player who fell through the system was last summer’s £26m Villa man Mings, released as a 16-year-old. “I don’t hold any grudges against Southampton for the decision they made,” he said. “It was fully justified at the time. I wasn’t big enough at the time and not physically developed as I needed to be to go into the under‑18s professional set-up. I respect their decision fully.”

TOTTENHAM: David Beckham
“There was one young boy who turned up at Tottenham’s Academy – a floppy-haired youngster from Leytonstone – that all the coaches were particularly keen on. David, his name was,” said the Tottenham kit man in his book ‘Shirts, Shorts and Spurs’. That floppy-haired kid wore shirts and shorts but never played for Spurs as he left to sign for his beloved Manchester United when he was 14. He turned out okay.

David Beckham was in the Tottenham youth academy. How’d they fuck that up???

WATFORD: Jadon Sancho
“Jadon is a player we had high hopes for because he’d been at the club since the age of seven,” Watford’s head of Academy Chris McGuane said in 2015. “We’d spent a lot of time working with him but what has happened is done.” It wasn’t completely ‘done’ as the FA investigated – and dismissed – reports of illegal payments made by Manchester City to Sancho’s ‘agent’ when he moved north for £150,000 as a 14-year-old. The Hornets did reportedly receive a 10% sell-on fee but Sancho left City for just £8m. He is expected to move on again for close to £100m this summer.

WEST HAM UNITED: John Terry
It’s hard to imagine Terry was not born wearing a Chelsea shirt and shin-pads but he actually grew up in a West Ham house and was part of Tony Carr’s Hammers Academy along with Rio Ferdinand and Frank Lampard. “He left and it wasn’t because we wanted him to go,” Carr said many years later. “He was a young 14-year-old and a local lad. He was a midfield player back then. You didn’t have a contract like they do at the academies now. Chelsea courted him and John was the one that got away.”

WOLVES: Stan Collymore
“There was obviously an attitude problem,” said Graham Turner, who was manager of Wolves when a teenage Collymore was on their books. Despite being prolific for the reserves, Collymore was released and played non-league football for Stafford Rangers. Years later when at Forest, he scored against Turner’s Wolves and said: “I went over to Turner in an angry celebration just to let him know what I thought of his decision to offload me.” That told him.