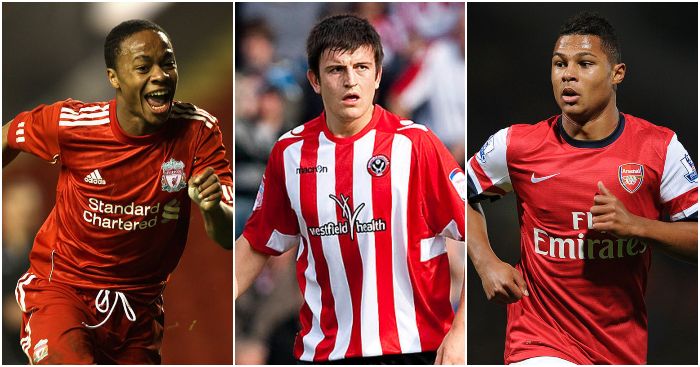 Last week we brought you the one that got away from every current Premier League club’s Academy. Now we bring you the most valuable player (right now – with valuations taken from Transfermarkt as a guide) to have stepped through their Academy doors…

ARSENAL: Serge Gnabry
You know the story. He’s the former Golden Boy nominee who was sent on a disastrous loan spell to West Brom after a serious injury and was then sold to Werder Bremen for just £5m. Four years later he has a Bundesliga title with Bayern Munich and 13 caps for Germany. He will surely usurp Andy Cole as the one that got away.

ASTON VILLA: Jack Grealish
Still prone to brainfarts of varying degrees of ridiculousness, Grealish is nevertheless a brilliant footballer and – on the pitch at least – an excellent captain for Aston Villa. And he will be their most valuable asset whenever this season eventually ends. “When the dust settles, if I could sell Pogba for £100m and bring in Grealish for £70m I would do it in a heartbeat. It’s a no-brainer,” said one pundit this week. A no-brainer indeed.

BOURNEMOUTH: Danny Ings
After just season in the Cherries’ first team – back when they were in League One – Ings was sold to Burnley for £1m to link up with Eddie Howe during his ill-fated spell away from Dorset. Eight years later Ings returned to the south coast to join Southampton for £20m. And he was undoubtedly their player of the season as he put himself back in the England reckoning. But can he still dance?

BRIGHTON: Lewis Dunk
The one that never got away. Dunk is probably too good to be battling relegation with Brighton but the furthest he has ever ventured from Albion is Bristol, where he had a one-month loan spell back in October 2013. The owner of one England cap, Dunk was strongly linked with Leicester last summer and a £50m move to Chelsea in January. But still he remains as captain and hero.

BURNLEY: Dwight McNeil
Burnley’s greatest asset, their best player and the finest talent to emerge from their academy since Jay Rodriguez a decade before. Boss Sean Dyche said that interested clubs – thought to be led by Manchester United – would need a “war chest” to sign the winger, but that was before it became clear that the current crisis might well leave the club desperate for any kind of cash injection.

CHELSEA: Declan Rice
The one that got away. Rejected by Chelsea as a 14-year-old, the defensive midfielder is thought to be wanted once again. Which does not make an awful lot of sense. Anyway, Chelsea have produced 16 players currently worth £10m or more (and that is a very conservative estimate) with Rice being joined at the top of that scale by current Blues first-teamers and England squad men Tammy Abraham and Mason Mount.

There are four Chelsea academy graduates in the England squad (plus a fifth in Declan Rice they can lay claim to having helped develop). No other club has more than two.

CRYSTAL PALACE: Wilfried Zaha
Edging out Aaron Wan-Bissaka is the winger who left Palace for Manchester United but then returned with his tail between his legs having failed to make the transition after Sir Alex Ferguson was replaced by David Moyes. Palace wanted £80m for the Ivory Coast man last summer but as Zaha edges towards 28, will he ever be worth that kind of money again?

EVERTON: Ross Barkley
Heralded as the new Gazza more times than must have ever felt comfortable, Martin Keown predicted that Barkley would “be one of the best players we’ll ever see in this country”. He wasn’t. He isn’t. But he does have 33 England caps and two major trophies after leaving Everton for Chelsea for just £15m two years ago. And he remains Everton’s most valuable graduate, even though he was never quite the mixture of Michael Ballack and Paul Gascoigne heralded by the ever-optimistic Roberto Martinez.

LEICESTER CITY: Ben Chilwell
After the Foxes’ phenomenal negotiating skills eked £80m out of Manchester United for Harry Maguire, they are expected to try the same trick with left-back Ben Chilwell. England’s first-choice left-back has been strongly linked with Chelsea despite a relatively poor season and Leicester would be laughing all the way to the bank if they can prise over £60m out of Roman’s hands.

LIVERPOOL: Raheem Sterling
He would cost way north of £100m, which is one of many reasons why last week’s mooted return to Liverpool does not make sense. That and the fact that half the Liverpool fanbase has not forgiven him for basically wanting to win trophies with another club and using a nefarious agent to make a transfer happen. But Sterling still loves Liverpool, who took him from QPR as a 15-year-old and gave him the first 129 appearances of his senior career. And he would be bloody brilliant for Jurgen Klopp.

The entourage of Raheem Sterling have told L’Équipe today that the English international would be open to a return to Liverpool.

“He has not forgotten about Liverpool, because that is where he was forged as a man and a player.” 👀 pic.twitter.com/xBto2EphE0

MANCHESTER CITY: Jadon Sancho
They don’t make many mistakes at Manchester City, but allowing Sancho to leave for £8m is an absolute cluster-f*** as fewer than three years later he will cost Manchester United more than £100m. In May 2017, he was being named along with Phil Foden and Brahim Diaz (now at Real Madrid) as one of a trio of players to be fast-tracked to the first-team squad; in August 2017 he was on his way to Borussia Dortmund after contract talks had broken down. “He didn’t want to take the challenge,” said boss Pep Guardiola last year.

MANCHESTER UNITED: Paul Pogba
Still worth more than Marcus Rashford? Their values are certainly closer than they would have been even 12 months ago. Pogba is the man who got away but then came back for £89m only to get stuck at the club, with both parties praying for a parting of the ways but Manchester United wanting more than their money back on the Frenchman. What a bloody mess.

NEWCASTLE UNITED: Sean Longstaff
We don’t know what’s more surprising – that Newcastle wanted £50m for Longstaff after nine Premier League appearances last summer, or that Manchester United didn’t just cough up. And as the 19/20 season drew to an unexpected close, Longstaff was not even in Newcastle’s starting XI, and Newcastle really are shite.

We’ve just signed a guy who, since the start of last season, played 63 games for Sporting, scored 36 goals & registered 24 assists for £47m. When you think that Newcastle wanted £50m for Sean Longstaff in the summer, I reckon we’ve just gotten ourselves a bit of a bargain.

NORWICH CITY: Todd Cantwell
One of a wonderful crop of youth products with Max Aarons and Jamal Lewis, the classy Cantwell has been strongly linked with a move to Liverpool this summer/Xmas/next summer after Norwich’s relegation from the Premier League is confirmed. Remarkably, he is the only Norwich player not called Teemu Pukki to have scored more than one Premier League goal this season.

SHEFFIELD UNITED: Harry Maguire
Maguire heads a list that also includes Kyle Walker, David Brooks, Dominic Calvert-Lewin and Aaron Ramsdale, none of whom still play for Sheffield United. The Blades did at least get three good League One seasons out of Maguire before he was sold to Hull City in 2014. Five years later he became the most expensive defender in the world. Literally nobody saw that coming.

Five years later, he returns for his first league game at Bramall Lane since as the world’s most expensive defender.

But Harry Maguire will always be a Bladesman. ⚔️ pic.twitter.com/nKhmHgsBPt

SOUTHAMPTON: Gareth Bale
It is a system that has produced Theo Walcott, Alex Oxlade-Chamberlain and Luke Shaw (as well as Tyrone Mings) but Bale remains their most valuable graduate, even as he remains unloved and unwanted at Real Madrid. In reality, he may leave for China for a fee close to the one Tottenham paid Southampton back in 2007 as the Spanish giants just want his wages, his golf clubs and his attitude to leave on a jet plane.

TOTTENHAM: Harry Kane
Real Madrid are the latest club to be strongly linked with Kane, who has finally realised that he needs to leave Tottenham at a time when absolutely nobody will pay his reported £150m fee. So he remains the best Premier League player to have won f*** all. But the boy from Walthamstow has delivered 136 goals in 198 Premier League games and is way, way ahead of Harry Winks and Andros Townsend on this particular list.

WEST HAM UNITED: Declan Rice
It’s been one hell of a wait since Mark Noble (12 years) to produce a bona fide West Ham star from the academy, with false Reece dawns along the way. The suspicion remains that he is really no better than Eric Dier but the Hammers might just pocket £80m for the England man before somebody realises.

WOLVES: Morgan Gibbs-White
There have been slim pickings in recent years but there are high hopes for Gibbs-White, who would surely have notched more than 67 first-team appearances if Wolves had not stumbled upon a big pile of money and signed Ruben Neves and Joao Moutinho to play in central midfield.