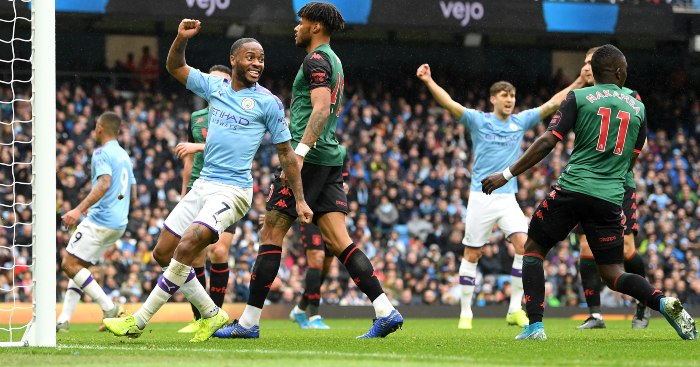 Seeing as there’s no value in backing City in the Carabao Cup final, lump on Raheem Sterling to score first. Degsy also knows the Liverpool score…

Norwich v Leicester
Norwich have never won a Premier League game on a Friday and they’ve shipped 11 goals in three matches on the day once immortalised by The Cure in that absolute 80’s banger. Will Jamie Vardy be singing after this? The Leicester striker scored 17 in his first 18 Premier League appearances this season but now Big Vards is aiming to end a run of seven matches without a goal. Norwich are seven points from safety so whatever way you choose to play it, any betting slip relating to this game should contain the words ‘Leicester’ and ‘Win’ on it. Seriously if you don’t back the Foxes, go and find the nearest mirror, look directly into your own eyes, take one long, deep breath and then slap yourself as hard as humanly possible.

Brighton v Crystal Palace
Brighton are sleepwalking into a relegation battle and have won just one of their last seven at home. Palace are no great shakes but look must bet material at nearly 3/1. That just screams value. Also, there’s literally f**k all more British than that couple in the news this week defying the quarantine ruling in that Tenerife hotel. Risk Level – Danger to Life. Dave and Irene “F**k it we are all inclusive. Coronovirus means possible death? A pint and a half of Heineken please and put us down for two belly busters in the morning – extra toast.”

Bournemouth v Chelsea
Bayern Munich ruthlessly exposed Chelsea’s current deficiencies in midweek and two very iffy defences here on the south coast should ensure goals. Frank Lampard’s men continue to ship goals with alarming regularity but should still have enough to edge what could be a thriller.

Newcastle United v Burnley
Newcastle have won just one of their last nine league games and have failed to score in their last three. Burnley are nearly 2/1 to win on Tyneside. You are bored. This is the antidote.

West Ham v Southampton
I wouldn’t put anyone off piling into Southampton here. The Hammers traditionally go well against the Saints but have won just three of 13 home games this season. And looking at their run in I would not be shocked to see David Moyes take them down.

Watford v Liverpool
Liverpool now have the same amount of points than the 1999 Manchester United treble winning team. With 11 still games to play. Just let that f**king sink in. The Reds have two big cup matches coming up after this, so would Klopp dare gamble and go with a weakened side with the league all but sewn up? Don’t you believe it. Liverpool have not won a domestic title for 30 years and their madcap, relentless winning machine will churn out another three points this weekend.

Everton v Manchester United
Ole’s mob are targeting a third successive victory and clean sheet, a feat the Red Devils have not achieved since January 2018. The Toffees’ unbeaten streak came to a thrilling end at Arsenal and admittedly without any real conviction I’ll be laying down some cash on United here.

Tottenham v Wolves
Wolves have lost just one of their last six in the league and might fancy the job in north London with Spurs missing Harry Kane and Heung-Min Son up top. Nuno Espirito Santo’s team bear Spurs last season and continue to impress. Raul Jimenez has scored 12 goals in 27 Premier League appearances so far, so is on course to beat the 13 goals he managed last season. Backing Wolves to avoid defeat could be the shout here, but with the ‘Wolves or Draw’ price a fairly skinny 4/7 let’s be a little bit more flamboyant and punt the draw.

Aston Villa v Manchester City
I don’t know about you but the Carabao Cup final is among the first signs of Spring. Budding leaves, chirping birds, daffodils having a first peak through the soil. And some millionaire footballer being p**s-your-pants funny by wearing a silver trophy as a hat with his socks rolled down at Wembley. One thing about the seasons though, if boffins say plastic takes millions of years to decompose why is that cheap table and chair set I bought from Home Bargains last summer already dropping to bits in my garden? Anyhoo, Manchester City have lifted the EFL Cup in four of their last six seasons and warmed up for Sunday’s showpiece by beating Real Madrid in the Bernabeu. Furthermore, when these two last met in January it was a massacre, with City winning 6-1 at Villa Park. Pep Guardiola’s men look the banker of all banker bets here but you won’t pull much back punting them at 1/6 on. A fit again Raheem Sterling could start and he looks worth tickling at 4/1 to score first.