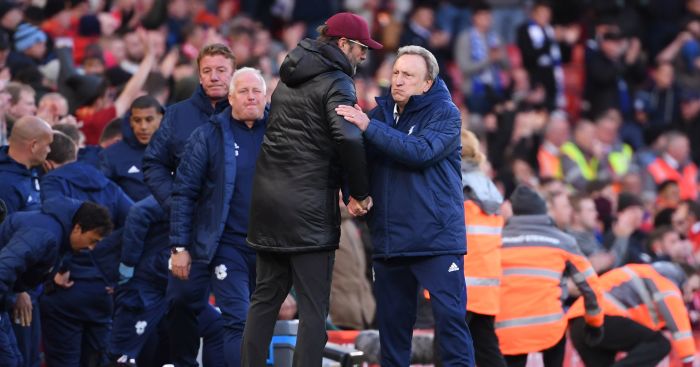 Cardiff manager Neil Warnock has branded Liverpool a “disgrace” and accused them of lacking class after missing out on the signing of Nathaniel Clyne.

Warnock claims he was “promised” the right-back on loan by the Reds, before discovering on television that he had joined Premier League rivals Bournemouth on Friday.

The 70-year-old handed Clyne his professional debut at Crystal Palace in 2008 and was also critical of the player.

“To see it on television when I’ve done everything right and they’ve promised that he’s my player this week, for me it’s a disgrace and just a lack of class,” said Warnock after his team were knocked out of the FA Cup by League One Gillingham.

“What I was disappointed in is having known Nathaniel – I gave him his debut – to not get a phone call from Nathaniel or from Liverpool, I thought that stank.

“I thought it was a disappointment, a lack of class, call it what you want.

“When you are waiting and doing it properly, I think you deserve respect and I don’t think they showed us any.”

He said similar about Chelsea in the summer, come to think of it.

England international Clyne made his debut for Eddie Howe’s Cherries during their 3-1 FA Cup defeat at home to Brighton on Saturday.

Warnock claims he missed out on three other potential loan players as he waited for the Clyne deal to be completed.

“I probably should have been illegally tapping him up or something like that, shouldn’t I?,” he added.

“But I did everything right and Bournemouth came in. I suppose Bournemouth, paying £19million for (Dominic) Solanke, it might just have whetted their appetite a bit.

“I’ve lost out on three players because of that by waiting. I lost out on a couple of full-backs and a striker because I couldn’t use the loan up. I’m doubly disappointed really.