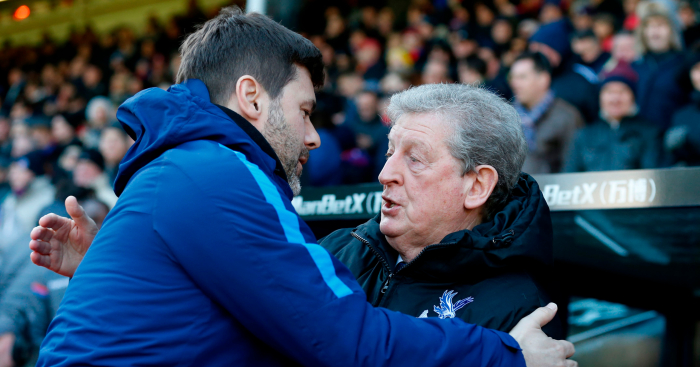 Roy Hodgson has defended Mauricio Pochettino after the Tottenham manager missed his latest chance to win a trophy when his team were eliminated from the Carabao Cup.

Thursday’s penalty shootout defeat by Chelsea ended Spurs’ run in the competition at the semi-final stage, prolonging the Argentinian’s pursuit of a first trophy at the club since his appointment in 2014.

This Tottenham side might actually be the best in Premier League history to not win a single piece of silverware.

For all he has achieved since his arrival – transforming their squad, their style of play and consistently taking them into the Champions League – he continues to divide opinion as some believe he can only be considered a success by winning a trophy.

A similar debate surrounds Jurgen Klopp’s also impressive three years at Liverpool, but even if his Crystal Palace team deny Spurs another potential trophy by eliminating them from the FA Cup in the fourth round, Hodgson cannot understand why.

The 71-year-old is another manager considered to have succeeded over the past decade, at Fulham, West Brom and Palace, without winning a trophy.

“If the be-all and end-all of your ability is have you got a trophy to your name, I find that hard to understand,” he said. “It’s so naive in terms of what the job of being a football coach is all about.

“Unfortunately you are just dooming 97-to-98 per cent of all the people working in football as failures because they may not have a chance of winning a trophy.

“What about the Rotherham manager (Paul Warne)? Is he going to be a hopeless manager all his life who never wins a trophy?

“People should sort of wise up to what football is today and stop talking about trophies.

“They should look at the fact (Pochettino’s) taken over a Tottenham team who, really and truly, are having their longest spell as being considered Premiership title contenders, Champions League contenders, bringing through loads and loads of homegrown players.

“What’s a trophy got to do with it?

“He’s good. Anyone who watches football and watches Tottenham play would have to be an admirer of the way they play football, and the way they go about their business.

“The manager has an integral part in that. So, as far as I’m concerned, if you’re only going to call managers who have won a trophy any good, then basically you have four or five.”