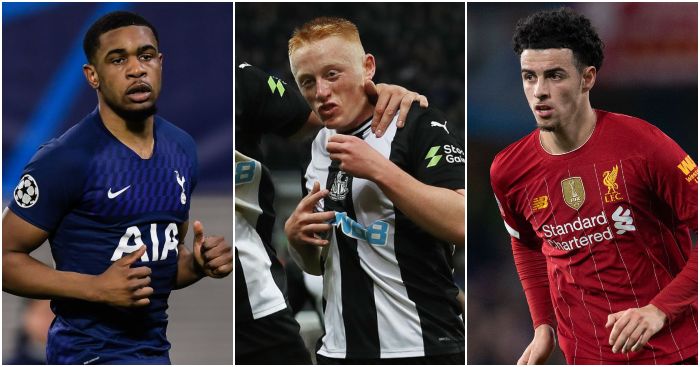 “I was standing on the pitch at Old Trafford before the game – it was just my second-ever start in the Premier League – and it finally hit me: I’m in the Arsenal first team.”

You certainly are, Bukayo Saka. Back in September, he was a left-wing option edging ahead of Reiss Nelson. By March – after injuries to Kieran Tierney and Sead Kolasinac – he was Arsenal’s left-back and was being mentioned as a possible England option.

It’s no small feat to play more football after your team has been promoted, especially when your contract is running down towards a free transfer this summer. But Davis has likely shown enough promise – largely off the bench – to earn an extension that seemed improbable when he was weighing up Championship loan moves last summer.

The 21-year-old is a contender to be Bournemouth’s player of the season as well as for future England squads. Without Ramsdale, the Cherries could be even deeper in the doo-doo. Tottenham, Chelsea and Leeds have all been linked with a summer move for the fresh-faced stopper.

Three goals in his first two Premier League 2 outings of the season convinced Graham Potter to promote the Irishman to his first-team squad. Two goals against Tottenham in October were the highlight as Connolly leapfrogged Glenn Murray into the Seagulls side. A month later he became a full Irish international. Now back on the fringes again but the boy is still only 20.

BURNLEY: N/A
Dwight McNeil is the only player under the age of 26 to play a single minute for Burnley in any competition this season.

We could have chosen Kurt Zouma, Reece James, Fikayo Tomori or Billy Gilmour, but Mount is the man who has started 25 Premier League games and five Champions League games, while becoming a six-cap England international. In Chelsea’s last Premier League game, Mount started in a three-man midfield with Gilmour and Ross Barkley. You don’t have to be a Chelsea fan to get a little giddy about that.

That might not sound like much of a breakthrough but this is Crystal Palace, home of the old men, which has only really produced Aaron Wan-Bissaka from the youth ranks over the last five years. Pierrick signed his first professional contract on his 18th birthday in December and came off the bench to pre-assist the equaliser against Norwich on New Year’s Day. Four days later he started in the FA Cup.

Brandon Pierrick made 2 key passes in his 8 minute cameo – no Palace player made more. A star in the making. 🌟 #cpfc pic.twitter.com/4EGckPYitq

You get the feeling that Marco Silva never really saw Calvert-Lewin as a credible first-choice striker. But what Duncan Ferguson began – improving delivery into the forward which brought a double against Chelsea – has been continued by Carlo Ancelotti, who has watched him score eight goals in his last 11 Premier League appearances. He’s probably been Everton’s player of the season.

“Harvey’s getting better all time, you see his power and pace but his tactical ideas are getting better and he’s getting into areas where he looks like he will score. It’s so pleasing to see, he works hard, he’s a calm boy, very stable, very focused and will only get better.” My word, Brendan Rodgers has landed on this feet with a list of 23 and unders that also includes Youri Tielemans, Wilfred Ndidi, James Maddison and Caglar Soyuncu.

“You cannot learn it at home in the living room, you have to learn on the pitch and you have to react on it, and he’s done that. He’s shown he’s a fantastic talent,” said Jurgen Klopp after watching Jones compete for 70 minutes against a strong Chelsea side in the FA Cup. He had enjoyed the honour of wearing the captain’s armband in the previous round, which must have seemed like a ridiculous fantasy at the start of the season.

18 years of age, in a merseyside derby, Curtis Jones scores this.

Your future star could never. pic.twitter.com/Vbno9ThrRE

“When you have a guy who knows, he can make an incredible performance – a young player that is always stable. Strikers sometimes have more talent and opportunity, a defender has to be stable – and Eric is like this,” said Pep Guardiola, who says the young centre-half reminds him of Sergio Busquets. In the toughest of defensive seasons for City, Garcia has stepped up and stepped forward.

The most natural finisher at Manchester United has now played almost as much first-team football as Jesse Lingard this season and has scored an impressive 12 goals to his teammate’s dismal two. Greenwood – still remarkably only 18 – oozes confidence and finishing ability, summed up by Rio Ferdinand this week when he said: “You cannot put a price on that, that cold-hearted calm confidence is just mad.”

It’s genuinely shocking to realise that Longstaff Jnr had not actually played senior football for Newcastle prior to the Carabao Cup defeat to Leicester in August. He has since started six Premier League games (scoring twice against Manchester United) and has become a target for a host of top-flight clubs alerted to his contract running down this summer. “I’m sure there are people in his ear, so of course the situation is a concern,” says Steve Bruce, who may or may not have people in his ear.

“Adam deserves to be in the spotlight today. He got his chance due to a few injuries but Adam is prepared to deliver at this level. He grabbed his chance with both hands, not just with his goals but the way he held up the ball and linked the play,” said Daniel Farke after the young Irishman scored an impressive hat-trick to beat Preston in the FA Cup; he then scored in the penalty shoot-out as the Canaries beat Spurs in the fifth round. Not going on loan in January was an excellent decision all round.

Adam Idah – what a bloody penalty. Smashed it. pic.twitter.com/lE9iSWlnMR

Can you have a breakthrough season at the age of 25? Why the hell not? It defies logic that Lundstram was a fringe player in the Championship but has started 23 Premier League games this season as the Blades have smashed all expectations. “I said to him last season, if we do manage to go up then don’t think ‘that’s me done!’ I always thought he had a part to play and now he just needs to show that level of consistency,” said Chris Wilder in August. Tick.

The Irishman’s first breakthrough came in November 2018 when Mark Hughes gave him a sliver of a chance for the Saints and that was somehow deemed enough to earn him a Republic of Ireland cap. A hamstring injury curtailed that breakthrough but Obafemi has pushed through again this season, starting five Premier League games and even scoring against Chelsea. He’s better than Che Adams, if nothing else.

After getting no hint of a Premier League sniff under Mauricio Pochettino, Tanganga was rescued by that great champion of young footballers Jose Mourinho, who has picked him at right-back, right wing-back, centre-half and left-back. Apparently he idolises Nemanja Vidic, which is not a bad place to start as a defender.

🗣 Japhet Tanganga: “From young, as soon as I signed for Tottenham, my ambition was break into the first team.”

Absolutely love this guy, such a great talent we have on our hands! He’s one of our own… pic.twitter.com/0arAXh0jXW

WATFORD: N/A
No teenagers used in the Premier League this season. It’s really bloody hard to break through at Watford.

“I’ve just got to keep trying to make it hard for the manager not to pick me, and just keep it up, because the hard work’s paying off and I’ve got to keep going, more and more,” says the young right-back, plucked from nowhere by David Moyes to replace the injured Ryan Fredericks ahead of the veteran Pablo Zabaleta. The kid looks like the real deal.

The total may be pretty small but Perry has found himself part of a match-day squad 11 times this season, getting on the pitch in the Carabao Cup and even in the Europa League against Besiktas. “I’ve got the taste of it, and that’s where I want to be, with the first team,” said the teenager. But will he find his path blocked by extraordinary Portuguese players along with fellow local lad Morgan Gibbs-White?