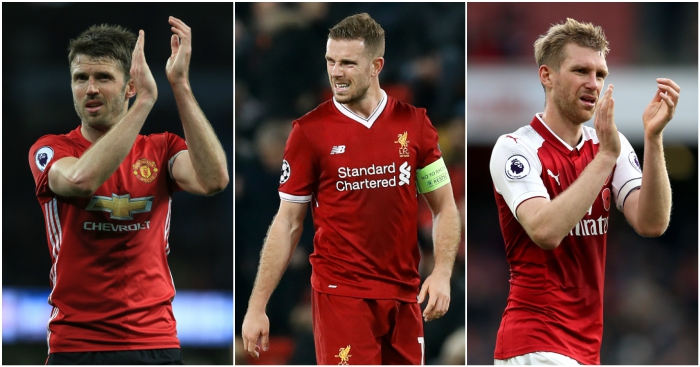 All statistics provided are Premier League only, because we said so…

Retiring at the end of May, and recently gave an interview with Der Spiegel in which he gave pretty honest reasons why he will be pleased for that end to come. Arsenal might need two central defenders this summer, but they hardly need cover for Mertesacker’s workload.

What a weird season. Began with claims for England’s No. 1 jersey and emphatically first choice at club level. Then picked up a horrible injury and has watched his club deputy break into the England squad.

He might be 37 years old and look like he will sell you a beer that purports to taste of a fruit that you’ve never even heard of for £7.80, but Bruno can still do a job. It’s just a shame that Chris Hughton has moved him out of the side post-January.

Hoo boy. We saw David Luiz and Antonio Conte falling out, but didn’t think that Cahill would also get moved out of Chelsea’s first-team picture. But then you can’t ignore the fact that Chelsea have taken 28 points from the 12 league games that Cahill has missed. Not a good look.

Poor Puncheon, who got injured at the end of Palace’s thoroughly miserable start to the season and so has lost every league game since he was made captain. Sam Allardyce was the manager last time he played in a league win.

A tired man who looks tired of Premier League life. Everton have hardly done much worse with Jagielka in the side, recalled under Sam Allardyce, but he is surely becoming yesterday’s man at Goodison along with Leighton Baines and Ashley Williams. Buy loads of No. 10s instead?

Winner of the ‘club captain I would least be able to pick out of a line-up’ award for 2017/18 is Smith. If Huddersfield stay up, they will surely look to replace him. I sound so bloody mean.

Morgan went on an incredible run of consistency of selection between 2007 and 2016, when he missed 19 league games of a possible 398 league games across ten seasons for Leicester City, but missed 11 last season and five already this. The bloody slacker.

Liverpool have been marginally better without Henderson in the side, but that gap is shortening after recent defeats without him at Swansea and Manchester United. Liverpool have lost one home league game that Henderson has missed since November 2015. And that is not an interesting statistic.

“What a fantastic way to finish off the season, with a new trophy in our cabinet. I am delighted that my journey with this great club is going to continue,” said Carrick in May 2017. Well, continue-ish. As in never get picked again and then announce your impending retirement with three months of the season remaining. Top use of £80,000 a week, that.

One of the biggest gaps between a team’s performance with and without their captain. Newcastle looked rotten in the five-and-a-bit games Lascelles missed in November and December, taking one point and conceding 16 goals at a rate of one every 30 minutes. Rafael Benitez loves him, and I won’t stop being annoyed that he hasn’t been given a chance for England.

Davis is the ultimate under-the-radar player, a midfielder who you sort of assume is playing even when you don’t notice him. Actually, he’s missed plenty of games this season. Given Southampton’s wretched record without him, I’d get him in between now and May.

Missed a chunk of time with a back injury in September and October, but more recently left out of the starting XI by Paul Lambert. Stoke have won once in the league without him since 2016, so Lambert may want to re-think that tactic.

Imagining a Swansea City without Angel is like picturing a Christmas tree without an… Angel on top. yet his use to Swansea has slowly been eroded. 29 starts in 2013/14, 22 in 2014/15, 20 in 2015/16, eight last season and just one this year, picking up a calf problem against Tottenham in January.

The most minutes of any captain, and flying the flag for the goalkeepers with Heaton so broken. The question on the minds and lips of Tottenham supporters: What happens when he asks the club for big money too?

Given the headlines he creates, it’s odd that Deeney has played so few league minutes this season. It’s also true to say that Watford have performed significantly better without him. Something something cojones.

Evans revealed that West Brom’s players cried after defeat at Bournemouth, which is a pretty transparent ‘we do care, honest’ message to some pretty p*ssed off supporters. Maybe his teammates were just crying because Evans had started again? West Brom have won one of the last 34 league games when Evans has been in the team.