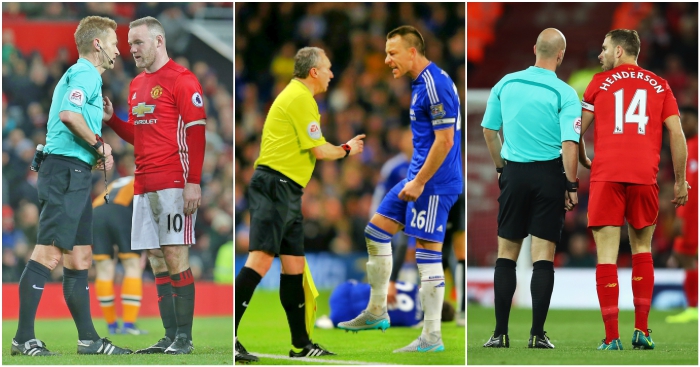 All statistics provided are Premier League only. Deal with it.

Arsene Wenger described Per Mertesacker as the “natural choice” as new Arsenal captain this summer, which was presumably a nod to the fact that he was expected to miss most of the campaign through injury.

Eddie Howe will be hoping that the current hamstring injury keeping lovely 30-something Simon Francis sidelined is not a serious one; Bournemouth have not won any of the four games the captain has not started.

England’s sickeningly entitled lion and Chelsea’s erstwhile leader started each of the club’s first four games of the season, but has made only one substitute appearance since. He has been sitting on the bench in his full kit since early September.

Only three players have provided more combined goals and assists for Alan Allardyce’s side this season than captain Scott Dann – although him starting makes a negligible difference to Palace’s chances of winning.

Everton’s last Premier League win with captain Phil Jagielka starting came in December. He has made just two appearances since. Is he the worst player in the top half?

Fun fact: No player in the current Hull squad has scored more Premier League goals this season than captain Michael Dawson (3). It is a wonder that they are battling relegation.

Fun fact: Wes Morgan has not missed a minute of a Premier League game since March 2015. It’s quite difficult to forecast where they would be without him.

Prior to the victory over Arsenal, Liverpool had not won a Premier League game in the absence of captain Jordan Henderson this season. The players must have been adjusting from his professional, dedicated regime to the carefree, nonchalant rule of James Milner.

See, you’re all fools for wanting Pep Guardiola to drop John Stones and Nicolas Otamendi. When not betrayed by his own body, Vincent Kompany only leads Manchester City to victory half of the time. Sure, that ratio is from a sample of two games, and they drew the other one, but still.

Upon Jose Fonte’s January departure, Southampton had a role to fill. Steven Davis was appointed club captain, while Virgil van Dijk was appointed team captain, meaning the Dutchman would lead the side out when selected in the matchday squad. Now we’re confused.

You think Ryan Shawcross’ record as Stoke skipper this season is decent? Jon Walters has captained the side twice in the Premier League this season; they won both games.

The lesson is simple: Stop playing John O’Shea. He has started 17 games as Sunderland captain this season, with David Moyes’ side winning just once.

Not so great Britton. The bloke who I always think is Welsh has captained Swansea to just two Premier League wins this season: Against Burnley on the opening day, and against Sunderland in December. And no-one brags about beating Sunderland.

The only regular Premier League captain to boast a better points-per-game average than Hugo Lloris this season is John Terry. The Chelsea skipper has started four games; Lloris has started 24.

Troy Deeney has twice as many combined goals (9) and assists (3) as his nearest Watford teammate this season. The last league game the Hornets won without him starting was in February 2015, where he scored the winner against Bolton as a second-half substitute. He is perhaps the most important captain in the Premier League.

Darren Fletcher has started each of the 80 Premier League matches West Brom have played since he joined in February 2015. His next closest challenger is Craig Dawson with 69 starts, then Gareth McAuley with 67. They really are the perfect partnership.

The last Premier League game West Ham won without Mark Noble starting as captain was when Kevin Nolan led them to a 1-0 win over Burnley in May 2015, with one Mark Noble scoring the winner. He is clearly vital to the cause – although he is no Jon Walters.