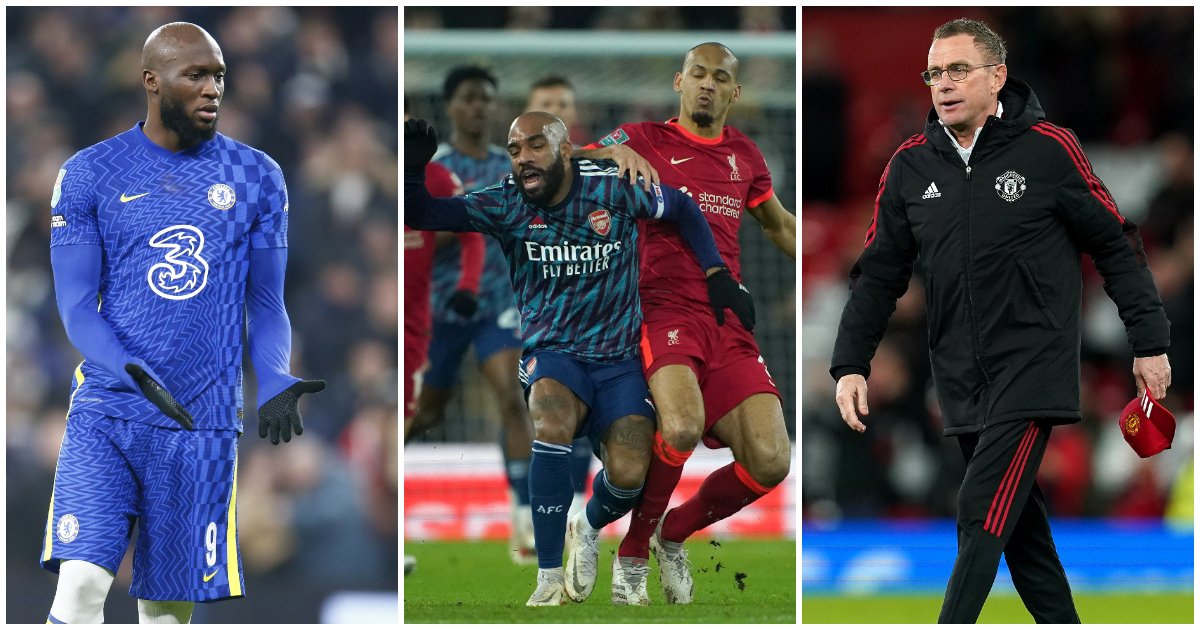 Arsenal and Liverpool are fighting for a Wembley place, while Man Utd and Romelu Lukaku look to rectify the weekend’s woes…

Game to watch – Arsenal v Liverpool
We assume Arsenal will have cobbled a team together by Thursday evening when Liverpool show up for the Carabao Cup semi-final second leg.

The Gunners performed impressively in last week’s first meeting at Anfield, where the hosts toiled against 10 men. That rearguard action has earned Arsenal a clean slate to take to the Emirates. Now we wait to see what they do with it.

Whether or not you believe they were so short-handed at the weekend that it was reasonable to call off the north London derby, they are certainly light on numbers in midfield, which remains Mikel Arteta’s biggest concern as he prepares to face Liverpool while simultaneously scouring the market for reinforcements. With Albert Lokonga his only fit senior midfielder, how does Arteta fill the gaping hole?

Liverpool have a void of their own in attack with Mo Salah and Sadio Mane at AFCON and the pair were woefully missed last week when Liverpool failed to create a chance of note before Takumi Minamino skied a sitter at the death.

Those struggles continued against Brentford, their first Premier League match without both Salah and Mane, until Fabinho headed in a set-piece. Only when Brentford become more adventurous did Liverpool begin to open them up more regularly.

Which must be the dilemma for Arteta. The Arsenal boss knows his team can shackle a Salah and Mane-less Liverpool, but unlike the first leg, the Gunners also have to find a way to get ahead and book a Wembley date with Chelsea.

Manager to watch – Ralf Rangnick
What fresh new way will the Red Devils find to embarrass themselves this midweek?

At the weekend, it was to capitulate to Aston Villa, who scored twice in four minutes to rescue a draw from 2-0 down with three-quarters of the game gone. All the good work of the first half – there were plenty of positives until the Red Devils went 2-0 up – was spoiled by a familiar inability to control possession or proceedings.

It would appear that United’s wretchedness has left Rangnick somewhat stunned and the German manager is scratching around for quick solutions. He’s already binned his preferred 4-2-2-2 formation having recognised that his players are unsuited to the system and apparently incapable or unwilling to learn its principles in a timely fashion.

Reverting to 4-2-3-1 at least puts Bruno Fernandes back in a position to pull United’s strings but a greater concern is the midfield behind the Portuguese maestro. At Villa Park, Fred was busy but Nemanja Matic woefully off the pace. Rangnick appreciated the control that Donny van de Beek brought to the FA Cup win over Villa last Monday after coming off the bench. Might it finally be time to give Van de Beek a go from the start at Brentford, or is that just crazy talk?

Team to watch – Burnley Tottenham
Burnley would have been an interesting watch, but it seems the Clarets don’t play football anymore.

So we switch focus to Spurs instead and wait to see how they frustrate Antonio Conte this week.

It feels like a long time since Tottenham have been in Premier League action, which is largely due to Arsenal crying off at the weekend. Since their last-gasp win at Watford, Spurs have lost twice in the Carabao Cup to Chelsea either side of dawdling past Morecambe in the FA Cup.

In the meantime, much of the chat around Spurs has been of Conte’s future and his transfer plans, none of which have so far come to fruition. So the manager has to continue his search for homemade remedies to Spurs’ familiar problems, namely a lack of creativity from the right and centre. Which won’t be helped by Heung-min Son’s absence.

But if Conte thinks he’s got it bad, Leicester will be without 11 first-teamers on Wednesday. Don’t make that call, Brendan. Don’t you dare…

Player to watch – Romelu Lukaku
It was a big weekend for Big Rom. As Thomas Tuchel noted, he f***ed it. At the worst possible time.

Chelsea really had to beat Manchester City at the Etihad but they were beaten by Kevin De Bruyne’s splendid second-half winner. The decisive moment came after Lukaku missed a sitter, which was not the only aspect of the striker’s performance that left Tuchel seething.

Things were already strained between Tuchel and Lukaku after that interview he gave Sky Italia, proclaiming his love for Inter and his unhappiness with aspects of life at Chelsea. So in his first Premier League game since being made to stand in the corner and think about what he’d done, a performance so abject that it earned Lukaku a place in the worst XI of the weekend was poor timing.

And it wasn’t a one-off. None of Chelsea’s forwards are firing at present, despite Tuchel trying a variety of systems in recent weeks. But Lukaku was bought for £97.5million, which should carry a guarantee of goals. Right now, the suspicion remains that for all their mis-steps, Manchester United were at least right about the Belgian.

Even if the title appears to be out of reach for Chelsea as they prepare go to Brighton, there remains plenty at stake for Lukaku in his long-running battle to silence the doubters. Should Tuchel bend to accommodate the Belgian?

European game to watch – St Pauli v Borussia Dortmund
The big three in Spain are all in Copa del Rey action this week, and there’s five Coppa Italia ties too. But the cup tie that titillates the most takes place in Hamburg on Tuesday night when St Pauli host Borussia Dortmund in the DFB-Pokal last 16.

St Pauli are well placed to make such fixtures a regular date while they sit at the top of Bundesliga.2, put there largely by the goals of the second tier’s joint-top scorer Guido Burgstaller.

The Austrian has 14 goals, one fewer than Erling Haaland, though the Dortmund goal machine’s tally has come in only 13 appearances.

The Millerntor promises to be rocking to welcome the current cup holders, who are out of the Champions League and trailing Bayern by six points in the Bundesliga.

EFL game to watch – Hull v Blackburn
Rovers’ rescheduled trip to Hull is Sky Sports’ TV pick of the week, though there are also three other Championship clashes available to watch over Tuesday and Wednesday night.

Hull too have had a rough time since the clash with Rovers was postponed on Boxing Day. They offered a spirited showing in the FA Cup against a rank-bad Everton side but in the Championship, the Tigers have lost their last three and haven’t won any of their last five.

Rovers, in contrast, are 10 without defeat, winning eight of them. Thanks in no small part to Chile’s finest export.