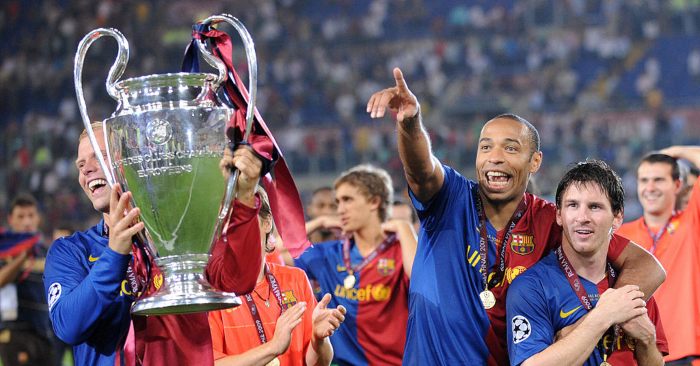 Three years ago to the day, former Spurs star Luka Modric was busy winning his third Champions League title with Real Madrid. Here’s an XI made up from players who left England for European success…

Goalkeeper: Zeljko Kalac
Australian ‘keeper Zelijko Kalac was back-up to Kevin Poole at Leicester City in the mid-nineties but won a Champions League medal with AC Milan in 2007; Kalac sat on the bench as Dida kept goal for the Rossoneri as they defeated Liverpool with two goals from Filippo Inzaghi. It was not a great final.

Right-back: Jerome Boateng
German international Jerome Boateng spent one season at Manchester City in the 2010/11 campaign before leaving for Bayern Munich. Boateng and Bayern lost out to Chelsea in the 2012 Champions League final before going one better the following season, defeating Jurgen Klopp’s Borussia Dortmund in the all-German 2013 final. That was a much better final.

Centre-back: Marco Materazzi
More than just a man who took a head-butt, Marco Materazzi won the treble with Inter Milan in 2010, with Jose Mourinho masterminding a win over Bayern Munich in the Champions League final that season. Matterazzi had a short spell in the Premier League with Everton in the late nineties, with the Toffees finishing in 14th during his only season in England.

Marco Materazzi appreciation tweet. How the hell did he go on to win the World Cup and The Champions League?! #EFC #Everton

Centre-back: Gerard Pique
Pique wasn’t even in the Manchester United squad for the 2008 Champions League final, with the Spaniard missing out on the Red Devils’ victory against Chelsea. One year later he was celebrating a win over his former employers as part of Pep Guardiola’s mesmerising Barcelona side. Swedish centre-back Patrik Andersson is another player who found European success after leaving England, winning the Champions League with Bayern Munich nearly a decade after a short stay at Blackburn Rovers.

Left-back: Giovanni Van Bronckhorst
Versatile Dutchman Giovanni Van Bronckhorst spent two seasons with Arsenal in the early noughties, helping the Gunners to a domestic double in the 2002. Four years later he was part of a Champions League-winning Barcelona side, with his former club the vanquished opponents in the 2006 final. Another ex-Arsenal player was on the bench in that game; Sylvinho picked up two Champions League titles after leaving north London.

Right wing: Arjen Robben
Another Dutchman who won the Champions League after leaving London, Arjen Robben won the competition with Bayern Munich in 2013. However, he could have picked up the medal a year earlier if he had remained with Chelsea, with the Blues defeating the German side in the 2012 final.

Central midfield: Luka Modric
With four Champions League titles to his name, it’s fair to say Luka Modric picked the right time to leave England. Tottenham could have done with their former star man’s creativity in last year’s final when they drew a blank against Liverpool in a pretty rotten final. Steve McManaman is another player who left England for European success at Real Madrid, with the Merseyside-born player winning two Champions League titles with the Spanish club. He is so underrated he did not even make this XI.

Central midfield: Javier Mascherano
Just like McManaman, Javier Mascherano left Liverpool without a Champions League title but picked up one whilst playing for a Spanish side. The Argentinean was on the losing side in the 2007 final, as Liverpool lost out to AC Milan but he won the competition in 2011, helping Barcelona to an emphatic victory over Manchester United. He won the Champions League again four years later, with Juventus the vanquished side in 2015.

Left wing: Gareth Bale
Four Champions League titles before his 30th birthday…leaving Spurs for Real Madrid has certainly made Gareth Bale’s trophy cabinet look all the more impressive. The notoriously hard to please fans at the Bernabeu may not have taken the Welsh Wonder to their hearts but his man-of-the-match performance in the 2018 final against Liverpool would have supporters of other clubs singing his praises forever and a day.

Striker: Luis Suarez
Suarez suffered heartbreak at Liverpool in the race for the Premier League title in 2014 but he won a treble with Barcelona just a year later. The Uruguayan put his new side 2-1 up in the 2015 Champions League final as the Catalans edged out Juventus. Of course, if he had stayed with Liverpool he could have been part of last year’s celebrations at the Metropolitano.

ON THIS DAY IN 2015: Luis Suarez pulled off one of the greatest first touches you’ll ever see…

Striker: Thierry Henry
He may have been one of the greatest Premier League players of all time but even Thierry Henry couldn’t inspire Arsenal to Champions League glory, with the Gunners narrowly losing out to Barcelona in the 2006 final. If you can’t beat them, join them. Henry went on to lift the famous trophy with the Catalan side in 2009. Eidur Gudjohnsen was on the bench for Barcelona in that final, having left Chelsea for Spain in 2006.