Home F365 Features Awkward: One regular per club who could be phased out 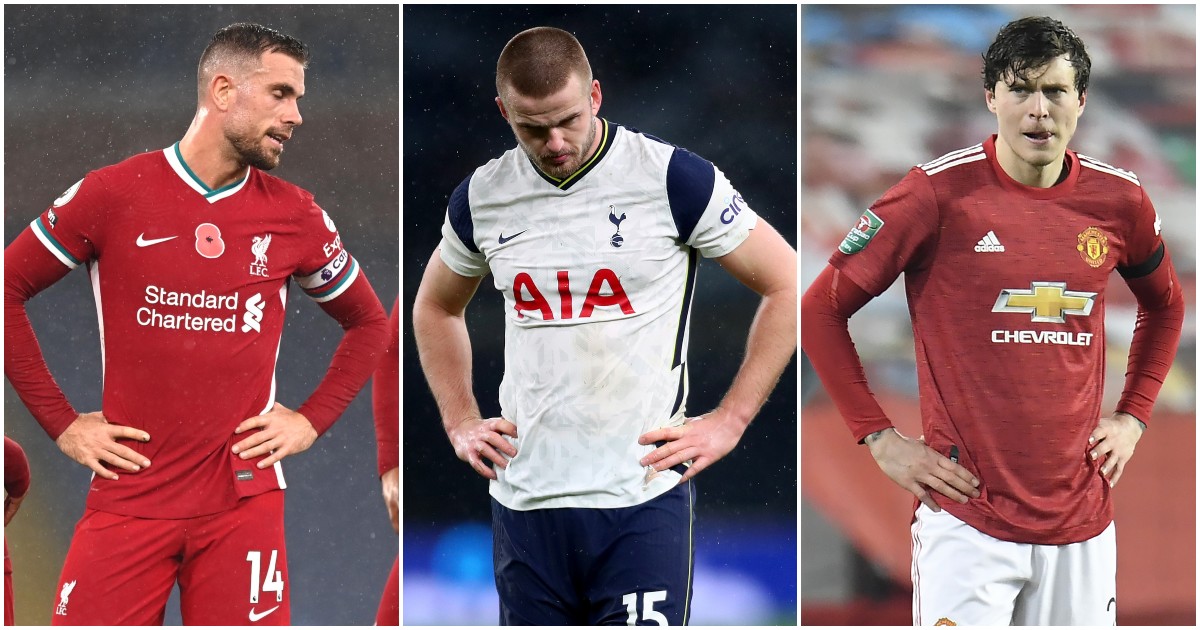 These Premier League regulars might have to step aside. Only one rule: must have started at least half last season’s league games…

Arsenal – Granit Xhaka (29 Premier League starts in 20/21)
It is fitting in a way that Willian’s piddling contribution to Arsenal’s season extended to not even managing to qualify for this feature, having started only 16 Premier League games. You could harshly but fairly make a case for Alexandre Lacazette here, or indeed for Pierre-Emerick Aubameyang as Arsenal look to refresh their attack. But let’s take the obvious route with Xhaka, still a midfield lynchpin last season for better or more often worse and would already have been packed off to Roma had an eye-catching Euro 2020 not convinced Arsenal to play a bit more hardball over the fee.

Aston Villa – Bertrand Traore (29 starts)
Anwar Al Ghazi adds to our instant regret at setting the bar at 19 starts, having managed 17 while being the most obvious contender to slide down the Villa pecking order in a rejigged attack. But we’re talking about phasing out regulars here, and Al Ghazi was crucial at times for Villa last season but doesn’t really feel like a regular. But with Emi Buendia already in the bag and Leon Bailey rumoured to be following and Jack Grealish still very much a Villa player at time of writing and hopefully not set to miss a third of the season through injury this time, it seems unlikely Traore will remain a regular starter either.

Brentford – Mads Bech Sorensen (29 Championship starts)
Always harsh/impossible to do these for the promoted sides – especially for Premier League first-timers like Brentford – given the vagaries of who will step up and what late transfer business might take place. But the acquisition of Kristoffer Ajer from Celtic puts the existing centre-backs on notice.

Brighton – Neal Maupay (29 starts)
But only eight goals. We all know what the problem is for xG FC, and they surely can’t be mucking about letting Maupay be the focal point of their attack for another season.

Burnley – Ben Mee (30 starts)
They don’t really do phasing out of key players at Burnley, do they? It’s been much the same squad for years now. There they all are, all the lads. Your Popes, Your Woods, Your Tarkowskis, Your McNeils, Your Westwoods. So we’ve put Mee in here not because we particularly think it’s the case but as an excuse to highlight the fact we put him here three years ago and thus demonstrate the impossibility of this task with regard to the Clarets.

Chelsea – Timo Werner (29 starts)
But only six goals. There’s a reason they’re sniffing around Erling Haaland. Werner has many admirable qualities but that is a deeply inadequate tangible return, and the sight of him celebrating a goal only for it to then be ruled out for offside or handball or whatever is already beyond meme. If the law of averages is a thing then he’s going to score about 39 goals next season. Chelsea, for very sound reasons, appear reluctant to rely on that line of thinking.

Timo Werner has become very underrated imo. 27 G/A in his debut season, a key player in our UCL winning team with his elite movement and ability to create space. If this is him at his worst, imagine him at his best. I think he will explode next season.

Crystal Palace – Jairo Riedewald (19 starts)
The very idea of phasing a player out remains an absurd luxury of a concept at Palace given the squad remains so very, very small. Those who started at least half of last season’s games and crucially are still Palace players will most likely all do so again, injuries permitting. But of all those, Riedewald is perhaps the likeliest to miss out, having just made the cut-off last time. That’s all we’ve got here really.

Everton – Gylfi Sigurdsson (24 starts)
Six goals in 36 appearances last season is a poor return and let’s say no more about it.

Leeds – N/A
With Alioski out and Firpo in at left-back, Leeds have already done their phasing out. They’re a club on the up and pretty much all of the old guard has now been moved on and there really isn’t another regular from last season you can see making a significantly reduced contribution at this stage. Pascal Struijk might play a bit less than he did last term if others are fit, but it’s hardly a phasing-out when you’re talking about a 21-year-old who stepped up so manfully in a couple of different positions.

Leicester – Jamie Vardy (31 starts)
You have to put some controversial ones in these features. Plus there’s not really anyone who started more than half of Leicester’s games who you can really see failing to do so this time. They’re a good, settled team likely to remain one. But at some point, eventually, time has to catch up with Vardy. Doesn’t it? It must do, surely? Whether that is this year or not, there’s no doubt that the goals (if not the overall performances) dried up quite alarmingly over the second half of last season with just three goals in his last 14 Premier League games and two of those coming from the penalty spot in a very silly final game of the season against Spurs. And now they have Patson Daka.

Liverpool – Jordan Henderson (20 starts)
Yeah, we said it. Arguably, thanks to his groin injury last season, it’s already happened. It is the bluntest and most unfair of measures that ignores myriad other factors, but the facts are these. Liverpool lost the last four games in which Henderson played. After his injury they won nine of their final 13 games of the season to sneak third. It will not go down well in the feverish press.

Manchester City – Raheem Sterling (28 starts)
His fantastic Euro 2020 might yet alter the trajectory of his Manchester City career, but there’s no doubt that by the high standards of both player and club, Sterling’s 2020/21 at City was a bit of a let-down. He started only five of the last 10 games of a season which brought a mere 10 league goals. Could very easily end up playing every game and scoring 20 goals in a team of strikerless wonders. But really, really might not.

Norwich – Grant Hanley (42 Championship starts)
You can make a strong case for Norwich phasing out every member of their squad every single season given their current fondness for Premier League-Championship yo-yoing. They’re already going to have to do without Emi Buendia and Oliver Skipp, two key players in their latest successful promotion push. Of the remainder, it is the idea of Hanley as cornerstone of a Premier League defence that fills us with the greatest instant dread. Harsh, probably, but there we go.

Southampton – Oriol Romeu (20 starts)
There are other players who started more than half the games who are more likely to miss that number this time around, but no others for whom such an outcome might come down to Southampton’s choice.

Tottenham – Eric Dier (28 starts)
We’ve had a lot to say about Dier over the years, and it will never ever not be massively weird that he appeared to just decide he was going to be Tottenham and England centre-back and for a while everyone just went along with that. In his defence, in that brief spell when Joseball was working last winter and Spurs were top of the league (also weird) Dier was actually a pretty crucial part of it, but alas it couldn’t last. Mourinho (and even in the end Gareth Southgate) eventually had seen enough, and Dier was on the outside. He did return to the Spurs starting XI under Ryan Mason, but if he remains a regular starting centre-back under Nuno then Fabio Paratici’s summer recruitment will have gone very wrong indeed.

Watford – Adam Masina (21 Championship starts)
A flagrant breach of our own rules with keen mathematicians out there already working out that 21 is not half of 46 but they’re our rules and we can do what we want. Not that we have to justify ourselves to you lot, but we’ll do it anyway. One, those 21 starts came in the last 27 games of the season after being kept out of the first four months of the campaign by injury. That makes him a regular in our eyes. Two, Watford have signed Danny Rose. Ergo, Masina phased out.

West Ham – Craig Dawson (22 starts)
Yeah, there isn’t really one for West Ham. They were dead good last season and which of their regulars are you seriously suggesting shouldn’t be this time around? Soucek? Rice? Antonio? Bowen? Fabianski? So we’ve gone Dawson on the outrageously harsh criterion of ‘Can’t possibly actually be as good as he looked last season, surely’. A 31-year-old one-season wonder.

Wolves – Joao Moutinho (28 starts)
There was a collective slip at Wolves last season after consecutive seventh-placed finishes and Moutinho definitely didn’t quite hit the heights of the previous two seasons as consistently as he had. He’s at an age now when any evidence of decline is a worry, and from 35 starts in 2018/19 to 34 in 2019/20 to 28 last season tells its own story. He was absolutely integral to Wolves’ play in those two fine seasons on their return to the top flight, pulling the strings and running the show. For better or worse, that wasn’t quite the case last season.