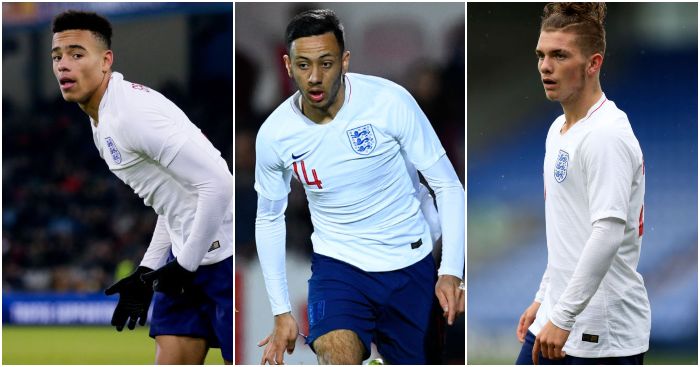 We are talking call-ups here, not necessarily England caps.

ARSENAL – Eddie Nketiah
We put Ainsley Maitland-Niles here in September. He was playing regularly, while Eddie Nketiah had been loaned out to the Leeds bench. Fast-forward five months and Maitland-Niles has slipped back behind not just Hector Bellerin but also, more troublingly, Sokratis Papastathopoulos in the right-back pecking order at the Emirates. Nketiah, meanwhile, is very much back at Arsenal and thriving under Mikel Arteta. He’s scored three goals in his last five games, and England’s firmly established attacking options keep breaking.

ASTON VILLA – Jack Grealish
It’s a big shout but, just to let you all peer behind the curtain for a moment, sometimes in this sort of feature you have to include a controversial, outlandishly contrarian selection to drive engagement. It’s the modern world, unfortunately. So in the spirit of shameful clickbait here we go: Jack Grealish will be the next Aston Villa player called up by England. In September we suggested England would probably look at Grealish sooner rather than later but ‘that might mean scoring his second ever top-flight goal four years after his first’. Having done just that, and also added his third, fourth, fifth, sixth, seventh and eighth, that box has been pretty emphatically ticked.

BOURNEMOUTH – Aaron Ramsdale
There are loads of English goalkeepers in the Premier League right now, but even so, being English and playing in goal and playing regular Premier League football usually earns a call-up somewhere along the way, especially under Gareth ‘Four Keepers’ Southgate. Just do the maths. Six English keepers have played 20 Premier League games or more this season; one has retired from international football and one is now out for the season. Ramsdale, the Under-21 incumbent, is thus England’s de facto fourth-choice keeper.

BRIGHTON – Adam Webster
It’s been over six years since Webster last pulled on an England shirt for the Under-19s in a side captained by Calum Chambers. Ruben Loftus-Cheek is the only member of that day’s starting XI who is currently in Southgate’s thoughts. Webster may not be at the front of Southgate’s mind either, but England do call up lots and lots of centre-backs and Webster is both a) one of those and b) playing regular Premier League football.

BURNLEY – Dwight McNeil
England have traditionally had lots of world-class goalkeepers and centre-backs but absolutely nobody to play on the left wing. Sadly for the likes of Dwight McNeil, we now live in Bizarro World. Even the handicap of playing for Burnley, who are to all intents and purposes invisible having once again sauntered into the top half of the table without anyone noticing or caring, would probably have been overcome in more conventional times. As it is, he only made his Under-21 debut late last year. But Trent Alexander-Arnold, Harvey Barnes and Jack Grealish are the only English players with more Premier League assists this season.

CHELSEA – Reece James
With your Callum Hudson-Odois, Mason Mounts and the Fikayo Tomoris of this world all now officially involved, the Reece James’ takes this spot pretty much by definition of being English, uncapped and playing quite a lot of first-team football for Chelsea. But you have to say it’s pretty foolish of him to be a right-back, though. England have quite literally hundreds of the things.

CRYSTAL PALACE – N/A
Aaron Wan-Bissaka was one of the standout players of last season and couldn’t get an England look until joining Manchester United. We almost put N/A in September but instead opted for a striker who is now at Bristol Rovers. Lesson learned. Go with your first instinct. Sorry, James Tomkins.

EVERTON – Dominic Calvert-Lewin
Five months ago we had ‘a nagging feeling that DCL’s big chance has come and gone even at 22’. That nagging feeling turned out to be bullwater. Harry Kane is injured. Marcus Rashford is injured. Tammy Abraham has reverted to the mean. Calvert-Lewin has scored 13 Premier League goals this season, including five in his last six games in a judiciously well-timed peaking of form.

LEICESTER CITY – Harvey Barnes
“You’re not going to get called up to the England team unless you’re playing for your club,” said Barnes in August. He is very much playing for his club, has scored four goals since the turn of the year, and is thus as straightforward a selection as Grealish and Calvert-Lewin. Next.

LIVERPOOL – Harvey Elliott
The bad news just keeps coming for Liverpool. Behind in their Champions League last-16 clash. Out of the FA Cup. Premier League title bid wilting under pressure from Troy Deeney and the coronavirus. And to top it all off is the very real fact that it could be bloody ages until another Liverpool player gets a first England call-up (caveat: See Norwich). Harvey Elliott has been perhaps the most eye-catching member of Liverpool’s fresh-faced young cup sides so we’ll go with him ahead of half-a-dozen other nauseatingly talented and infuriatingly young Liverpool players who will probably all make their England debuts within six months of each other in three years’ time, by which point that never-ending ache in our left knee will only have gotten worse while death’s bony finger creeps ever closer to our shoulder. Happy Wednesday.

MANCHESTER CITY – Phil Foden
Picked a handy time to take a starring role in a Wembley final as he secured his sixth major honour despite the shame of being unable to regularly displace Kevin De Bruyne, Bernardo Silva, Ilkay Gundogan and David Silva in Manchester City’s midfield at 19 years of age.

MANCHESTER UNITED – Mason Greenwood
He’s 18 years old and only two players have scored more Manchester United goals this season. That might point more to some of the problems at Old Trafford, but it’s pretty, pretty, pretty good for Greenwood. Made his Under-21 debut in the autumn – stepping off the bench to help turn a 2-1 deficit into a 3-2 win over Turkey – and scored his first goal in a 2-1 defeat to the Netherlands in November.

NEWCASTLE UNITED – Sean Longstaff
If he really wanted to play for England, he’d have joined Manchester United in the summer. Newcastle is just too far away from Londoncentric Gareth Southgate, who lives in, er, Harrogate. Also working against Longstaff in these days of The England Pathway is a complete lack of youth international history. And some woeful form.

NORWICH CITY – Todd Cantwell
Norwich have a pleasing number of options here. Take your pick from Ben Godfrey, Max Aarons and Todd Cantwell. Aarons might be the most promising of the lot but, like Reece James at Chelsea, he has carelessly chosen to be a right-back. We went for Godfrey in September, but Cantwell is surely now ahead of him after a proper old-fashioned breakthrough season that has earned comparisons to Jack Grealish and, unsurprisingly given the Norwich connection, James Maddison. The issue is probably less ‘Will Cantwell get an England call-up?’ and more ‘Will he be still be at Norwich when it happens?’ Liverpool have been sniffing around.

SHEFFIELD UNITED – John Lundstram
This was easier before Dean Henderson got a call up, no two ways about it. George Baldock is having a fine season, but is just another fool who seems to think there is any point in being English and a right-back, while sadly we have to discount Jack Rodwell on the technicality of him having three England caps in another life. Lundstram it is, then, on the basis of consistently impressive performances and a history – albeit now a pretty ancient one – in England’s beloved ‘pathway’.

SOUTHAMPTON – Che Adams
‘Angus Gunn has already been called up, and James Ward-Prowse has already been capped,’ noted September’s Southampton entry as names were hurriedly crossed off lists. , ,  ‘That leaves Adams, who could well ‘do a Callum Wilson’ and appear from the fringes of the England bubble with a decent scoring record. All he has to do now is start scoring some actual goals in the Premier League.’ In your own time, Che.

TOTTENHAM – Japhet Tanganga
The general air of melancholic confusion that hovers like an unclaimed fart over New White Hart Lane has led to excessive criticism of Jose Mourinho’s admittedly miserablist reign and also reignited the fondness for Mauricio Pochettino. All perfectly understandable, but it is worth remembering that Spurs were domestically rotten under Poch for an absurdly long time and, while the jury remains very much out as to whether anything has really tangibly changed under Darth Jose, the emergence of Japhet Tanganga is a big tick. It seems inexplicable now that Tanganga, on the back of an eye-catching pre-season, failed to get any kind of look-in during the dog days of Pochettino’s reign as the great big Belgian heart that powered Tottenham’s defence for half a decade stopped beating.

WATFORD – Ben Wilmot
Currently on loan at Swansea but he was our answer in September and the only thing that has really changed since then is an Under-21 debut, which surely can’t hurt.

WEST HAM – Jarrod Bowen
Prolific in the second tier for Hull and now up and running in the Premier League, the supermarket own brand Arjen Robben still has plenty of people blocking his path to the England side. But he’ll cut inside and go past them all before curling one inside the far post with the left foot. Because that’s how he scores his goals, you see. Like Robben did.

WOLVES – Morgan Gibbs-White
Liverpool fan Conor Coady is not going to get an England call-up and it would be better for everyone to just make peace with that. So, who might? Morgan Gibbs-White’s season has been an immensely frustrating one, with a back injury taking him out of contention for three months and most of his chances coming in the Europa League. That said, he clearly remains on the England PATHWAY fast-track and, rightly or wrongly, that puts him closer to a full call-up than two years of excellence at the heart of a defence that now, as far as Southgate is concerned, has the wrong number of people in it.