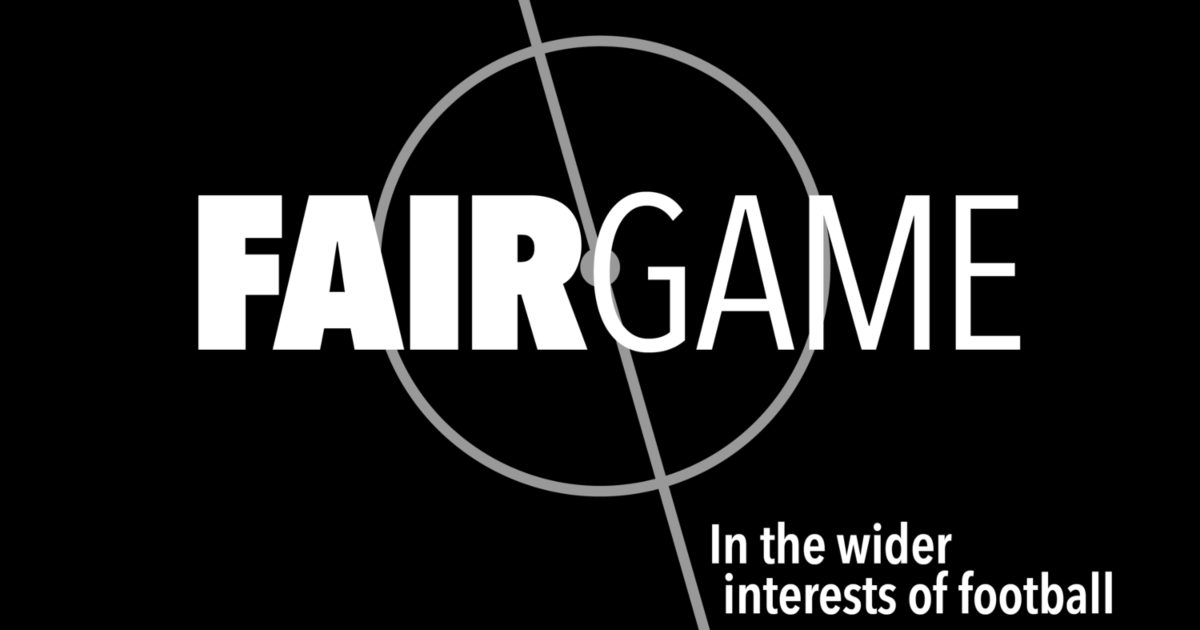 A campaigning organisation called Fair Game is being launched this week with ambitious and far-reaching aims to improve the organisation, finances and governance of football in this country, to reshape it with sustainability, integrity and community at its core and belief in fairness, openness and transparency as fundamentals.

This is not a talking shop or fan pressure group; it is way beyond that. They have assembled experts in finance, administration, law and other fields to really look not just at what needs doing but what is actually achievable and realistic. The list of people involved is impressive – cerebral rather than celebrity – and the aim is to be a transformative force in English football.

Twenty-something senior clubs have signed up in support, and they have backing from ex-footballers Dion Dublin, Brian Deane and John Scales, as well as all-round superhero and good guy, Greater Manchester Mayor Andy Burnham.

For the fans of Bury and Accrington Stanley. The Mayor of Manchester has got your back.

Will the other clubs in Greater Manchester join the movement to change football? pic.twitter.com/6x2EnDZgW6

If you download their proposals here, this is a well-researched, detailed document, assembled by a team of informed people with considerable expertise.

There are fundamental ideas such as the installation of an independent regulator to oversee how clubs do their business, all manner of changes to accounting and reporting, changes to the fit and proper person test, as well as addressing issues like parachute payments, 3G pitches and financing of clubs. There are calls for more fair and equitable distribution of finances across the leagues. And that’s just for starters. This isn’t just blue sky thinking or fantastical speculation, this is hard-nosed, credible and deliverable.

The Fair Game people want to input into the ongoing fan-led Tracey Crouch review of football, so that it can be built into genuine legislative reform which will deliver major transformative change. They are noble aims. Anyone who cares about football as a community activity, will welcome their proposals, they are all long overdue and badly needed.

But one thing missing from their comprehensive document is the big gorilla in the room: the Premier League. They’ve had informal discussions with some clubs but no-one has been brave enough to put their head above the parapet yet to back them. This isn’t seen as crucial because, obviously, in numbers, the vast majority of clubs lie in the EFL and further down the pyramid. Reform in the EFL isn’t tied to reform of the Premier League.

Yet, given that much toxicity in football leaks from the Premier League down the pyramid, not least financial disparity and the consequences, financial and otherwise, of some of the ownership individuals and models, it is important that they get involved. They may be just waiting to see which way the wind blows before jumping. It is often the way.

The Premier League already acts as a semi-autonomous body. The FA has veto power over the appointment of the league chairman and chief executive and over any changes to league rules, but in reality, the FA have not exercised what little power they do have and the Premier League basically gets to do whatever it wants without due regard to anyone or anything else. While it protests it has football’s best interests at heart, this is met by a lot of cynically raised eyebrows.

Does it even want its business independently regulated? Some clubs are owned by people who are used to answering to absolutely no-one and used to getting their own way all the time. Does it actually want stiffer, more forensic ownership tests? Does it want to more fairly distribute its vast income? Or does it just want to do what it wants, regardless of the wider implications for the game?

So much is wrong with the architecture of football’s financial governance and the existence of the Premier League is implicated in much of it. If Fair Game’s laudable aims can have any long-term effect, somehow, they’re going to have to exert power and control over football clubs that, in some cases, have been hollowed out and used like a glove puppet by its owners for its own ends, exploiting fans’ loyalty to further aims that are nothing to do with football. These are owners who have no interest in the pyramid, no interest in anything outside of their own ego-fuelled delusions, acquisitive desires or propagandist aims.

Fair Game wants the sort of game, clubs and structure that most of us want, but that is a game that some clubs, owners and even some fans do not want or do not understand. And that’s the biggest challenge of all. Can legislation be devised that will force the whole of the pyramid to behave with the greater good of the communities of the game at heart, or will the usual selfish, self-interest continue?

It’s fantastic that such a professional and ambitious campaigning partnership has been put together. It deserves the support of all people, not just football fans.