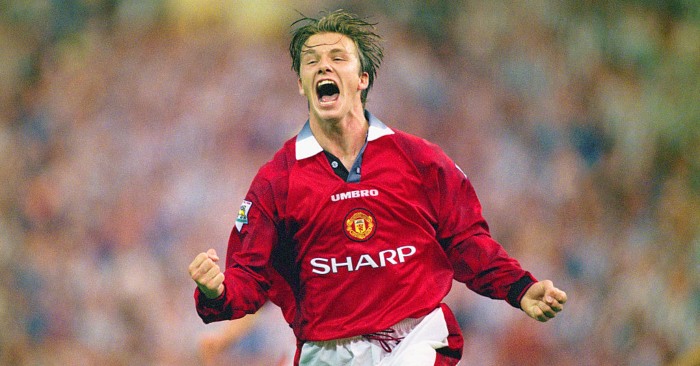 Another trip down memory lane; here are the headliners from the 1996/97 season…

Goalkeeper: Mark Bosnich
In October 1996, Aston Villa goalkeeper Mark Bosnich returned from injury to make his first appearance of the season against Tottenham Hotspur at White Hart Lane. The home crowd made a point of jeering the Australian goalkeeper, remembering an incident in a previous game that involved Bosnich doing his best Harald Schumacher impression on Spurs striker Jurgen Klinsmann. Bosnich could not resist reacting to the crowd, performing a Nazi salute that caused immeasurable offence to those in attendance.

He quickly apologised after the match but the stigma attached to the event followed him around for the rest of his career. Bosnich had a solid season otherwise, helping his side finish in fifth place. The club looked to push on at the end of the season with the purchase of undercapped English star and Villa fan Stan Collymore.

Right-back: Jason McAteer
McAteer’s competitive spirit conquered Robbie Fowler’s sportsmanship in one of the strangest sights in Premier League history after Fowler was awarded a penalty following a collision with Arsenal’s Yorkshire-born goalkeeper David Seaman. The Liverpool striker tried to convince the referee to change his mind but the penalty stood. Merseyside hero Fowler missed the resulting spot-kick but McAteer scored from the rebound. Liverpool remained in contention for the title for the majority of the season, but finished up in fourth place after only one win in their last five games of the season.

Centre-back: Philippe Albert
After narrowly missing out to Manchester United in the race for the Premier League title in the 1995/96 season, Newcastle United gained a measure of revenge on the Red Devils. In the October of ’96 the reigning champions visited St. James’ Park in good form, having remained undefeated in the league up to that point. Newcastle produced a breathtaking performance as they ran out 5-0 winners with Belgian defender Philippe Albert scoring the pick of the goals, a spectacular 25-yard chip over Danish legend Peter Schmeichel.

ON THIS DAY in 1996 (20 years ago!), Philippe Albert scored this magnificent chip to seal a 5-0 win over @ManUtd at St. James’ Park. #NUFC pic.twitter.com/yzcKt27TAk

Albert was it again in December, scoring against Spurs in a resounding 7-1 victory for the Magpies, but the fog soon descended on the Tyne with manager Kevin Keegan’s surprise resignation.

Centre-back: Tony Adams
Following in the footsteps of team-mate Paul Merson, Arsenal captain Tony Adams went public regarding his addiction to alcohol. Adams’ subsequent recovery was aided by incoming Arsenal manager Arsene Wenger introducing new dietary and lifestyle regimes for the players. Wenger’s arrival marked the beginning of a new era at Highbury and in the Premier League as the Frenchman modernised the English game. He made an instant impact, leading the Gunners to a third-place finish. At the time, it was their best ever Premier League finish but much more was to come…

Left-back: Stuart Pearce
Nottingham Forest endured a terrible start to the season, going without a victory from the second game of the campaign all the way up to Christmas. Manager Frank Clark left the club, leaving captain Stuart Peace to became caretaker player-manager. Pearce took to it well, winning the Manager of the Month award in January after three Premier League victories in a row. The golden oldie relinquished his duties to concentrate on playing in March as Dave Bassett came in as manager. But Forest were relegated at the end of the season and Pearce left the City Ground to continue playing top-flight football.

Right wing: David Beckham
Beckham began the 1996/97 season in style, scoring a goal from his own half in Manchester United’s opening game against Wimbledon. The Londoner’s form in the campaign earned him the first of many England caps and he went on to win the PFA Young Player of the Year award. Beckham helped Manchester United to their fourth Premier League title in five years but the triumph was overshadowed in the summer as influential French forward Eric Cantona announced his retirement. There was only one man capable of taking over the iconic No. 7 jersey at the club.

Central midfield: Ali Dia
Southampton boss Graeme Souness signed the previously unknown Ali Dia in 1996 after an apparent recommendation by AC Milan star and 1995 Ballon d’Or winner Geoge Weah. Dia only made one substitute appearance, with Souness subbing off the sub after a poor performance in a 2-0 defeat to Leeds. Dia was never seen in the Premier League again, with Southampton learning that the prestigious recommendation was a hoax. Dia had conned his way to a top-flight appearance and rightly takes his place in the Premier League Hall of Shame. Still, Souness would probably pick him over Paul Pogba.

Central midfield: Juninho
Brazilian midfield maestro Juninho was the star of a Middlesbrough team that reached both domestic cup finals and suffered relegation in the same season. The club went through an injury crisis during the campaign, cancelling a game against Blackburn Rovers as a result. Manager Bryan Robson was stunned as the FA docked them three precious points as a result. The lost points proved fatal, as Middlesbrough ended the season two points from safety. Despite the talents of Juninho and Champions League winner Fabrizio Ravanelli at his disposal, Robson lost out in the League Cup final to Leicester City whilst the D-Team’s Roberto Di Matteo’s fantastic goal in the FA Cup saw ‘Boro lose out to Chelsea.

Left wing: Gordon Strachan
Coventry City appointed Gordon Strachan as player-manager in November 1996, with the Scot becoming the Premier League’s oldest ever outfield player at 40 years of age. Coventry remained near the foot of the table for most of the season but shock wins against Liverpool and Chelsea in the April of ‘97 gave them hope of survival. Strachan needed to guide his side to a win on the final day of the season as they played Spurs at White Hart Lane and had to hope Sunderland failed to get a positive result against Wimbledon. Fate smiled on the West Midlands as Coventry won 2-1 whilst Sunderland’s last season at Roker Park ended in relegation as they lost 1-0.

Forward: Gianfranco Zola
After the previous season saw Dutch great Ruud Gullit arrive at Stamford Bridge before taking over as manager, Chelsea signed another big-name foreign star in the 1996/97 campaign. Italian international Gianfranco Zola joined the club in November ’96 and became an instant hit with the Chelsea fans. His unique talents helped the side to a sixth-place finish and an FA Cup win, their first since 1970. Zola even received personal recognition for his contribution by being named as the FWA Footballer of The Year.

Gianfranco Zola became a Blue on this day in 1996…

The rest is history! ✨ pic.twitter.com/4EA4G8yUWQ

Striker: Alan Shearer
Newcastle United broke the world transfer record to sign Alan Shearer from Blackburn Rovers for £15m. Club manager Kevin Keegan hoped Shearer would fire the club to Premier League glory after finishing as runners-up the previous season. Shearer had been there, done it and got the winner’s medal in a blue and white shirt at Rovers in the 1994/95 season and a partnership with the 1995/96 PFA Player of the Year and F-Team star Les Ferdinand looked like a title-winning combination.

But Keegan resigned in January and the Magpies ended the campaign in the runners-up spot again as Manchester United beat them to the title for the second year in a row. Another unwanted repeat for Newcastle occurred in March ’97 as they lost 4-3 to title rivals Liverpool yet again. Shearer did at least win something, grabbing the PFA Player of the Year award as a reward for his 25-goal season.