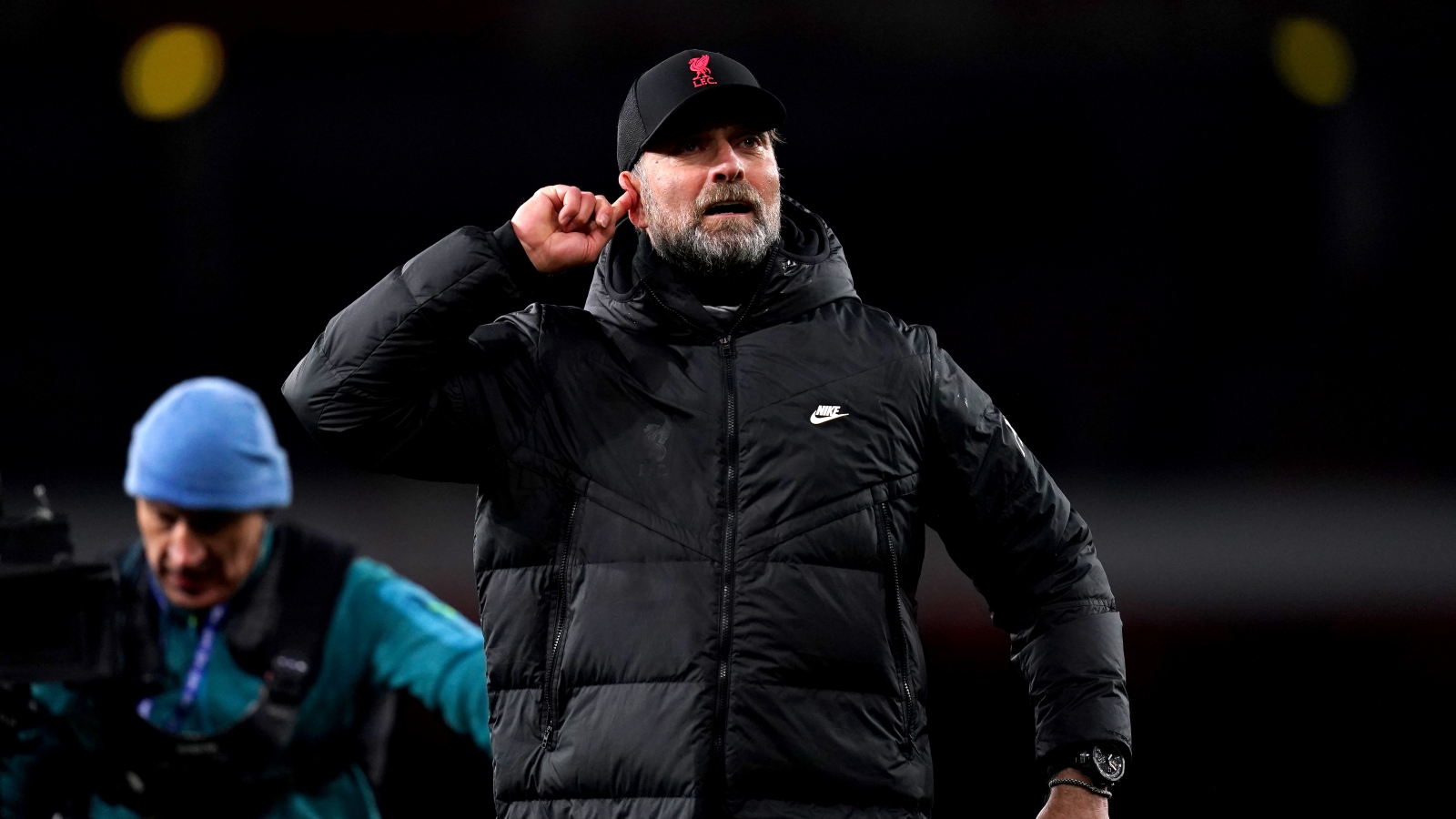 The Premier League will be in big trouble when Jurgen Klopp leaves Liverpool. Plus, Leeds, Allan, Atletico vs City, Andy Robertson and more.

The Premier League will be dead when Klopp leaves…
The Man City fan who responded to my email is wilfully missing the point of it, as expected. I was not seeking to say Liverpool were the best. I was merely stating that if you took them out of the equation City would be currently marching slowly and without any drama too their fifth successive title with about 20 points to spare in most of those seasons. Although it might suit the City fan to muddy the waters by saying ‘Pool fans love themselves’, I wish someone would comment on whether anyone thinks a scenario like that would be good for football. The Premier League would be DEAD and if and when Klopp leaves the Premier League WILL be dead. The mantra that its the most competitive league in the world is not true and if the Premier League doesn’t change soon, then it will have killed itself. I know Bayern have done this in Germany also but at least they have fans all around the world who celebrate their success. Nobody cares about City outside of Manchester and that’s why nobody is excited when they waltz to another title- I’m saying this because it happens to be true so please if anyone thinks a 20 point gap every year between City and everyone else is palatable, then please make your argument.

Pedro’s Fu Manchu
In the spirit of Pedro’s Moustache, I wanted to provide another bit of advice for Manchester United fans as a Liverpool fan while also hoping it provokes the Mailbox into sharing some of their equally idiotic takes.  I remember Klopp’s first few months at Liverpool telling my friends and anyone who would listen that what we really needed was to bring Rafa back to finish what he started.  I just knew the solid foundation of good ownership would propel him over the finish line that Jurgen would sadly never achieve.  Geggenpressing isn’t going to work in a league that already plays physically at pace!  Remember Rafa’s Valenica passing Liverpool off the park in the 1900’s!  I think the first sign that your team is improving is that they don’t listen to fans like me in any meaningful way other than community outreach.  Thankfully for Liverpool fans, FSG didn’t look to the past like I was at the time.  So as you read your own and others’ missives about what needs to be done and who needs to be brought in, just know you’re on the right track when none of it happens and things move along slowly and methodically with results like December 2015 against Newcastle, Watford, and West Brom being part of the process.  You will scream and demand change, but rest assured you’re heading in the right direction when nobody listens to you other than your mate seated next to you at the pub.  The minute the owners try to placate you talking about your history or leaking stadium renovation plans without blueprints and financing agreements, start worrying.
Niall, Bethany Beach

Leeds!
Football!!! I can’t put it any more articulacy than that.

The joys of football
I can’t wait to see City against Atletico.  The level of tactical fouling and general shithousing will be spectacular.

City are are the better team but Atletico are better at shit.  Who wins?
Aidan, Lfc (probably City but it’ll be fun to watch)

Allan’s reaction says it all…
I know I’m a day late and a dollar short but I saw Ed’s mail about the Allan red card and have to say I agree that it was a deserved red. I saw people on twitter (lord why do I even bother there) saying “Oh it’s only a yellow because he barely touched him.”  First of all this ignores the vital fact that ASM is running down the field at roughly the pace of a scalded whippet. Second, on repeated viewings, Allan goes in high, very fast, and if you look, his trailing leg is sweeping in behind/towards ASM. If ASM hadn’t been so quick/far ahead he could’ve been hurt by the challenge. It was reckless with no hope or attempt at winning the ball.

Allan’s reaction is most telling to me. He took his yellow card, clearly thinking that he’s going to take one for the team and avert the danger. The reason he loses his shit when it’s upgraded is because he’s gone in so wildly and recklessly he’s absolutely fucked it and put his already struggling team in a terrible spot. This wasn’t just your typical professional foul of “well let me drag him back, take my yellow, stop the game.” He goes in high, miles behind the man let alone the ball, and his trailing leg is sweeping towards the player. Is he intending to hurt ASM? I don’t think so, but it’s both a professional foul and a dangerous play and his red card was fully deserved.
Paul S., LFC, Maryland, USA

Come back to me when Robbo nets a hat-trick…
Martin (actually big fan of Robertson), Peckham

Mike, LFC, London saying that Andy Robertson redefined the role of a full back is the usual hyperbole when a player hits a run of form. While his assists record shouldn’t be sniffed at, comparisons with Cafu without any context of the teams and eras they played doesn’t show it in a proper light.

Comparisons with Leighton Baines record are a better representation but there’s another player who holds the exact same number of league assists as Robertston’s 49 assists for Liverpool. He played in a similar position, the same era and in a similar set up. In fact it was the same set up, Lukasz Piszczek played as a full back for Klopp’s Dortmund.

Piszczek was picked up from Hertha Berlin as a full back who often filled in on the wings with a not very impressive 4 assists in 68 Bundesliga games. He joined Klopp’s Dortmund and immediately recorded 25 in 104 games over the next 3 seasons. From the final disastrous season under Klopp onwards for 3 years he only recorded 6 in 67 games. There’s a not very subtle spike in performance there while playing under Klopp.

Its not hard to spot the spike in performance with Robertson either, with 40 of his assists coming in the past 4 years. In fact every season playing for Liverpool he has been awarded more league assists than he did playing in the Scottish League 2 (4th division). The Premier League must really be a farmer’s league, mustn’t it?

When it comes down to it the man who ‘redefined the role of a fullback’ sits in the dugout. Robertson only had 4 assists in his 2 seasons at Hull, makes you wonder what it would’ve been like if Klopp had picked up a more established player to play instead of a relegated £8m full back.
Mick, Cardiff

All Fans of X are Y
All Fans of X are Y. You’ve read it 100s of times in the Mailbox and elsewhere. X is a team the author doesn’t like, most often a direct rival, and Y is a negative smear: delusional/entitled/arrogant/idiotic/..you get the idea.

Except, it’s utter, utter nonsense isn’t it? The writer of such tripe has no real evidence whatsoever to back this up and it’s based purely on tribalism. On numbers alone it is clearly ridiculous; let’s pare down Man United’s reported 1.1B fans to, say, 50 million who genuinely follow every game- does the author know them all and their level of entitlement? Of course not.

Leverhulme Blue tried a different variant in the most recent mailbox:
[Negative Thing] .. “Not all Liverpool fans are like this (although there’s too big a minority in that particular fanbase for it not to be a coincidence), believe it or not.”

Maybe he would like to put a figure on this “too big a minority” (5%, 10%, 20%?) and tell me exactly how he arrived at it. And also, the figure from his own club, and how he arrived at that, too. I suspect it might be lower.

From now on, can we have a “All Fans of Team X are Y” klaxxon to stop this utter bilge? I know it leads to spicy comments in the Mailbox and the Comments, but, come on, enough is enough.
Dave J

Cut the fans some slack…
In a world of cancel culture, it’s really hard to sustain what loyalty means. Think about it, we expect fans and players who have found their worth by virtue of one man’s belief in their club, to abandon their sentiments towards him because of his ungodly affiliation with a power drunk dictator?

Abramovich did not order the invasion of Ukraine. And like most wealthy men who made their fortune, there is most times an unholy alliance between economic and political power. To think otherwise is to live in denial.

Chelsea fans and John Terry have every reason to sympathize with Abramovich. He made Chelsea relevant in football history, earning fans the bragging rights to gloat about their club.

They are not chanting Putin’s name, neither are they glorifying the invasion.
Victor Enite Abu (MUFC) Nigeria