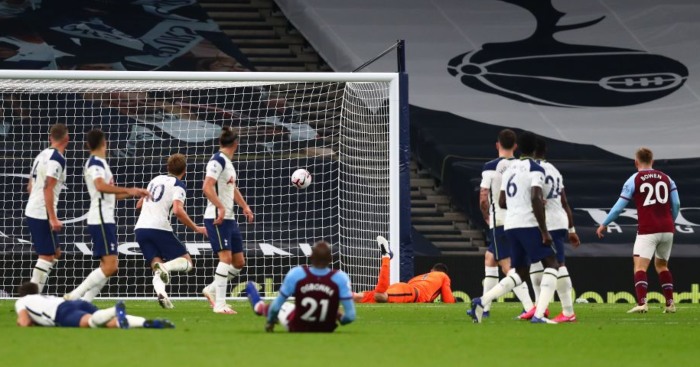 Goals goals goals. Lots of them, in all shapes and sizes and in many different combinations. Spurs v West Ham was just the latest in the trend for high-scoring games. But even as the sixth went in, I found myself wondering if this proliferation was somehow beginning to undermine the value of each goal and each game. When the rarest, most exciting moments become more commonplace, there is inevitably some falling-off of thrill about them in football and in life.

Goals are the whole point of football, obviously. Or are they? No, not really. The prevention of goals is equally important, as is the build-up to the goals. And come to think of it, everything in a game that isn’t a goal.

In other words, we can’t divide, slice and dice football into important bits and non-important bits, like a TV director. It exists as a whole. And while seeing the ball go in the net is the ‘good’ bit, it cannot happen without all the other bits. Which is, of course, why VAR is such a nonsense in making its decisions at arbitrary self-appointed so-called significant moments. Everything affects everything else. You can’t cut out one section and decide it is the crucial part.

Football is an unusual game in that the scoring bit is usually so rare. One or two is the most we’ve been used to seeing, not six or seven. In, say, basketball, where points are scored every few seconds, each individual score is expected, missing one the more shocking occurrence. But in football where a single goal can decide the result, it has a huge significance.

So to see Spurs lashing in three in 16 minutes and West Ham, three in eight, it feels like they are taking the piss out of the game, or maybe to be more accurate, taking the piss out of the idea that this is somehow the elite version of the game, when a team simply can’t defend. It makes the soulless fan-free games look even more like a training match where no-one is really trying that hard. It looks like no-one is really taking it that seriously. Weirdly it looks like a much lower standard. It looks like park football where players have a pop from anywhere on the pitch just for a laugh and occasionally it goes in, and where defenders are simply the biggest people who turned up but have no idea how to defend.

And there has always been great pleasure to be gained in a solid, backs-against-the-wall defensive performance. Defending is as much an art as any part of the game. The idea that making it easier to score would make everyone think the game was better or more exciting is the stuff of a Hollywood director’s lack of imagination and understanding. If defending in the Premier League becomes so poor that no-one can defend a three-goal lead, it undermines its own credibility as somehow ‘premier’.

The fact that this isn’t being mirrored in lower leagues or up here in Scotland, suggests something about the top flight is being exposed by the current situation. As I wrote two weeks ago, at least one Premier League player thinks it is being caused by defenders responding badly to lack of fans and strikers being liberated by it, but whatever the reason behind the goal glut, it will alter how we view every goal. No longer will we assume as the third is scored without reply that the game is done and dusted. Even if it’s 1-0 at 88 minutes, that’s no reason to think it won’t end 1-4.

It’s funny really. The Premier League has spent so long selling itself as a superior version of the game, so much better than the old black and white days when high scores were more typical. They were the times before elite sports science, tailored training regimes, billiard ball pitches and high-class managers imbuing their wisdom in return for millions of pounds. The days before an average player earned £70k per week. But here we are, with shite defending and shambolic organisation all delivered at a high cost to club and punter.

With only five games played this season it still feels like a new thing. It is still surprising and unusual. It is providing laughs aplenty, but I wonder how we’ll feel about it after 38 games with several clubs having let in over 100 goals? Will it still be quite so entertaining or will the poor quality of play that has facilitated the high scoring create a less satisfying, lower-quality product?