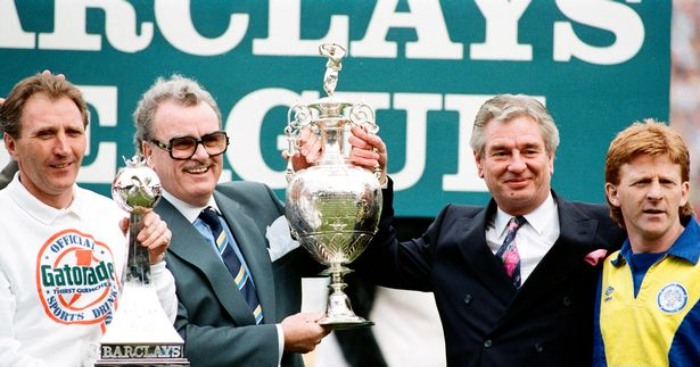 Farewell Premier Greed. Bonjour Divisions 1 to 4. Why football should return without the Premier League – English football’s historic mistake – after pulling together during the coronavirus…

Respected Guardian writer David Conn referred to the formation of the Premier League in the early 90s as a ‘profound historic mistake’. Fair-minded Conn was being kind but mistakes tend to just happen; they are not engineered like the breakaway league by the Football Association.

‘Cultural appropriation’ might be a better description as a game, almost overnight, shifted from the ordinary people who had sustained it – some of whom were guilty of the double crime of being poor and enjoying football – towards a manageable demographic with money to burn.

It’s all there in black and white in the FA Blueprint For Football from 1991:

The then-England manager Graham Taylor was blunt at the 1991 press conference to release the FA blueprint which sparked the breakaway league it promptly lost control of – like a try-hard teenager assembling a pipe bomb.

“People think there must be a lot of my thinking in this Premier League,” said Taylor. “There is none. I’m not totally convinced this is for the betterment of the England team. I think a lot of this is based on greed.”

He had a point. First the larger clubs had come for the gate receipts, shared until 1983 in a sensible attempt to keep some sort of sporting balance. Then they sniffed out the TV money, forcing a split weighted in favour of the top tier in ’85. But that wasn’t enough and just seven years later the ‘Big 5’ of Manchester United, Liverpool, Arsenal, Everton and Tottenham went for the satellite TV market. ‘The Premier League was a breakaway and its purpose was to keep all the money about to flow into football,’ wrote Conn, succinctly.

Strip away the early razzmatazz and it was fan culture that fed the Premier League and built the brands. Boy have we paid for it. The Big 5 and Murdoch’s BSkyB packaging the world’s most popular sport for TV as a “whole new ball game” was like catching a red snapper in a drift net, whacking it on a barbecue and then claiming to be a world-class seafood chef.

How can an organisation based around a ‘profound historic mistake’ emerge unchanged in a post-coronavirus society which, via the work of nurses, delivery drivers and shop workers, highlights the inter-reliance of our existence? It surely cannot and it would be an equally profound historic mistake for English football to rush back from this enforced period of reflection unaltered.

A return to Divisions 1, 2, 3 and 4 should be tabled with an end to the demarcation and divisive Premier League and Championship trademarks. “But the Premier League is one of the country’s biggest exports,” you can almost hear the bluetooth headsets of top-tier executives and government trade envoys rattle. Well, brands change like the Opal Fruits in fans’ pockets and it’s the authentic fan culture and rich club history that attract overseas fans. The Premier League moniker would be forgotten within a couple of seasons.

The inequality in English football was already evident before the Covid-19 outbreak with its grassroots crisis and litany of clubs left to the mercy of such characters as Steve Dale at Bury. Now that imbalance is magnified with lower-league clubs like Colchester – the first of many to release players en masse – exiting an unprecedented period of football wealth with only a rattly all-seater stadium and a mountain of debt. It could have been different.

Colchester United owe over £25m to parent company. Directors believe club has sufficient cash to survive short term in relation to #COVID19 but auditors say there is uncertainty over ability to survive as a going concern which on longer term basis is understandable #CUFC pic.twitter.com/PNmFBKeA81

At Newcastle, fans argue distastefully over the merits of the club being bought by the Saudi regime, while the sensible German 50+1 model of community ownership is not even considered a viable option thanks to the free-market monster that was unleashed in ’92.

All pervading though is the sense that football – although changed by the Premier League – isn’t any better. For every improvement, something is lost. Are there any superior footballers now than Matt Le Tissier and Paul Gascoigne, whose portraits graced the sticker books of fans before the big money era?

Is the England team much improved now on the one that performed well at Italia ’90, despite all the young talent being currently corralled into top-tier talent farms? You can’t force feed genius.

“We think this crisis provides an opportunity to reset English football and the financial structures that support it,” said Plymouth Argyle Chairman Simon Hallett in a recent statement and he is right. English football needs a new deal, to make amends and to return without the Premier League.