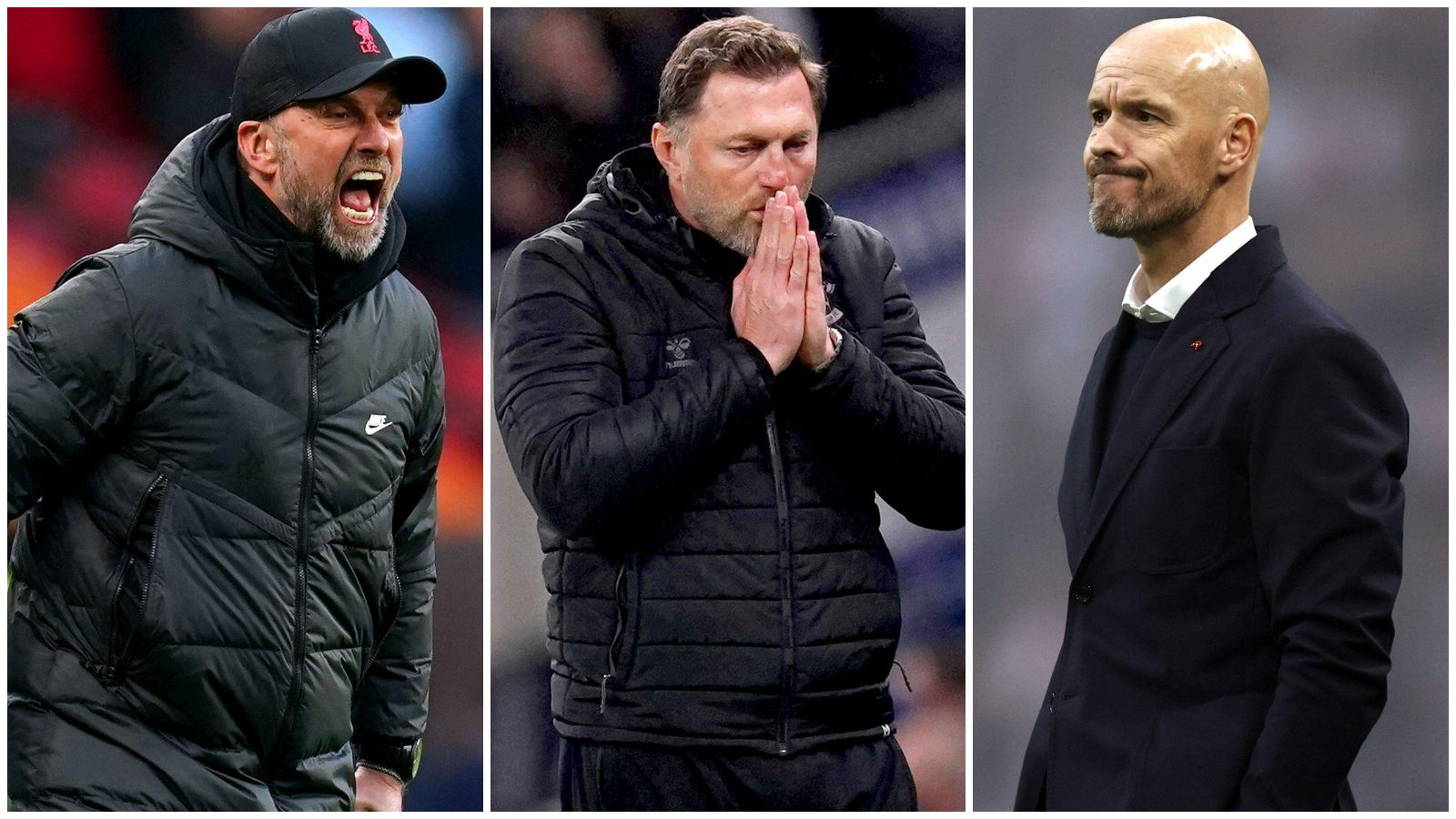 Even David Moyes winced when he saw Erik ten Hag’s start at Man Utd. Also: Liverpool’s post-Champions League stitch up, Ralph Hasenhuttl could be gone by September, and more…

Yer Da might tell you that every one plays everyone else twice but the newly published Premier League fixtures require plenty more context.

Here are 10 things that jumped out at us…

‘Erik ten Hag handed dream start’ was the Daily Mail‘s initial reaction to United being pitted against Brighton and Brentford in their first two games, presumably forgetting the humping the Red Devils received on the south coast at the end of last season. Then Liverpool come to Old Trafford in Ten Hag’s second home game which gives the new manager very little time to prep for one of his toughest tests of the season, especially if United continue to fanny around in the transfer market. The window will still be open by that point and it there’s little encouragement that United will have conducted their business before Jurgen Klopp and co. rock up looking to embarrass United again.

If August is tricky for Ten Hag, October is an absolute head-f*ck. United will have to fit three Europa League group games around six Premier League fixtures, beginning with a Manchester derby at the Etihad and featuring a trip to Chelsea straight after the midweek visit of Tottenham. Before the end of October, in his first 13 games, Ten Hag will have faced all of United’s Big Six rivals as well as having gone to Leicester and Everton.

The new manager will surely learn from David Moyes’ mistake when he whined about his start to life as United boss. “It’s the hardest start for 20 years that United have had… I find it hard to believe that’s the way the balls came out of the bag,” said Moyes before the opening day, which set the tone for his reign. Ten Hag needs to embrace the challenge and hope the hierarchy furnishes the squad with the players they need, and fast.

2) The toughest start? Palace and Bournemouth.

Patrick Vieira’s side host Arsenal in the league’s curtain-raiser before going to Liverpool. Then they welcome Villa before heading to Manchester City. Newly-promoted Bournemouth have exactly the same four fixtures in a different order.

Arsenal, Liverpool & Manchester City in our first four games? We get 6 points from that lot and I'll be limbering up for a European tour.

3) Southampton also have a pig of start. They face three of the Big Six – Spurs, United and Chelsea – in five games before the end of August.

Leeds and Leicester are their other opponents, which could spell trouble for Ralph Hasenhuttl given how poorly Saints finished last season.

Hasenhuttl then has games against Wolves, Brentford and Villa to perhaps regain some credit before the first international break of the season (after the fixtures scheduled for September 17) when you can bet some chairman will be getting twitchy trigger fingers.

4) For the fourth season in succession, Liverpool will play a newly-promoted side – Fulham this time – on the opening weekend.

5) It’s not all good news for Klopp, though, and you can be sure we’ll hear all about the fact that Liverpool will have to face Big Six rivals on four of the six weekends after Champions League group games. Those fixtures: Chelsea (September 17), Arsenal (October 8), Man City (October 15) and Spurs (November 5).

Chelsea, Man City and Spurs all have two games against Big Six teams straight after Champions League matchdays. Arsenal also face two major rivals after Europa League matches but the fixture computer has done Man Utd a solid by scheduling them to face no Big Six opponents after their European commitments.

6) This is a truly mental stat…

Wow, wow, wow, get the banners out. Tottenham's opening game of the season against Southampton will be their first Saturday 3pm kick-off at home since December 2019! #THFC

7) Pencil in Sunday April 2 for a possible title decider.

Given how close Liverpool and Manchester City were to each other, and how it is expected there will be little more than a cat’s c*ck hair between them again, the two meetings between Klopp’s side and Pep Guardiola’s champions could prove pivotal.

They meet first at Anfield on the weekend of October 15 – after a Champions League midweek – before the return meeting takes place 10 games from the end of the season on the weekend of April 1, though with no European commitments before or after, you can bet it will be moved to the Sunday.

8) Gareth Southgate has had a stinking few weeks but at least the fixture computer has granted his wish for no Big Six clashes on the final matchday before the the World Cup.

The Premier League have, however, inked in two Big Six clashes the week prior, with Chelsea hosting Arsenal and Liverpool going to Tottenham on Bonfire weekend. And Liverpool face Chelsea immediately before the September internationals.

9) Thomas Frank will be feeling rather less chipper about the scheduling around the World Cup, with games against three of last season’s top four scheduled either side of the break.

In the week immediately after the World Cup hiatus, Brentford face Spurs, West Ham and Liverpool.

If the Bees suffer a dose of second season syndrome, they best hope they have the points in the bag before May. Their run-in concludes with games against Liverpool, West Ham, Spurs and City.

10) Forest, Bournemouth and Leeds have also been dealt difficult run-ins with each side, like Brentford, facing two of the Big Six in their final four games.

Fulham, the other team of the five bookies’ favourites for relegation, have a kinder run-in, facing Leicester, Southampton and Palace before concluding with a trip to Man Utd. Though they also have to face City in their last game in April.

In summary, you can make a case for them all being f*cked.