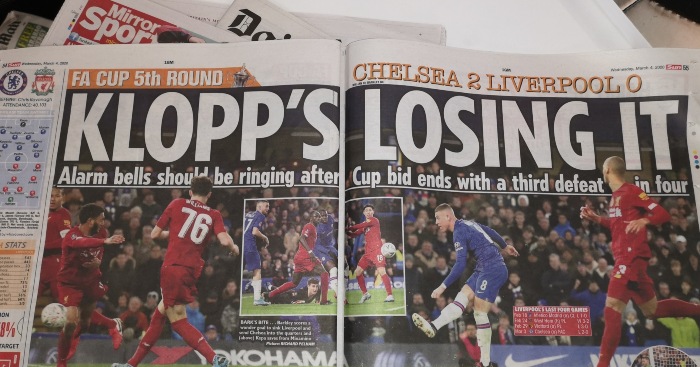 So we now learn that what was perhaps the most reassuringly fixed of all the clocks on the wall of life is not fixed at all.

Football has always been a way to know where you are in the year and as football fans, our state of mind – lost in a fug of Christmas excess, risking just a t-shirt as the games slip from the winter’s grip into April sunshine, feeling full of potential each autumn – mirrors its schedule. If you got into football young (who didn’t?) then the confluence of an international tournament with the last days of the summer term means we all share the same memory – desperately hoping a particular teacher would wheel the telly-on-wheels to the front of the class, forego maths and stick on England vs Nigeria. Then school’s out, you get up at 10am and amble around distractedly for a few hours until the first afternoon game.

You knew, as far as you could know things at that age, that this was how life here worked.

I think one of the seminal moments of growing up is when something has happened, some kind of crisis, and for the first time you spot that the grown-ups involved in handling it – who you’d always assumed could handle anything – are actually pretty clueless. Our first proper taste of growing up is rarely based on our own new competence but comes in recognising that most people don’t really know what they’re doing.

And it is pretty bloody clear that none of us have a clue what to do with the virused, partial 19/20 season. Every solution in its own way is just as good and bad as the next. For my money, I’d use each club’s current points total to dictate the height on a pair of high heels – Liverpool run in flats and so on – and give those heels to the most beloved pundits in the firmament (Keown, Michael Owen, Steve Mcmanaman, others) and have them race across the car park of an abandoned McDonalds while commentating on their own progress, to decide the eventual standings. I see no reason to consider that a lesser alternative to what’s been suggested by some of the deep football thinkers of the age.

We all presumably know that we’ve crossed a line out of the adolescence of 21st century football; and to cross that line from adolescence you have to get shoved by something that puts your navel-gazing into clear, silly perspective. We could feel something coming, of course, some change that would turn what was palpably unsustainable into practical, real-world unsustainable. There can’t have been many people who looked at the last seven or eight years of Premier League football, with its soaring costs, its increasing detachment from and contempt for the fans, the birdbrained micro-climate self-regard of its stars, its poisonous entanglement with the gambling industry and thought, yep, that’s a sustainable way of being; it’s never going to burst, this here bubble.

But I always found it hard to picture exactly what could make the bubble burst, because as long as I pictured football, I pictured something that would forever capture our imagination and grip our youthful emotional core just enough that, no matter its ugly furnishings, it could keep on prospering. No-one’s about to just stop watching football, are they?

A failure of imagination, obviously. It’s a fact of human nature – no-one likes to imagine something which will undoubtedly be more powerful than them. That stuff we leave to the darker reaches of fantasy, treat it as fanciful by default. And then when it happens, when a small cluster of virulent cells from a poorly regulated market thousands of miles away swiftly has the power to disbar the concept of sport from our society, we immediately turn to talk that returns us to being ‘on top of the situation’.

Desperate loans have been taken out on the eventual return of football to permanence, to try to buy our continued patience, understanding and goodwill in the present – by the start of April, okay by the end of April, by mid-June maximum, ‘run the old season up to September’, and so on. It’s all fanciful – the infection profile of this virus might mean that any large gatherings are outlawed for the next six months, and then it’s winter, so then the time-frame is extended. An unexpected cure might turn up ten days from now. No-one has a clue.

But there’s a bigger problem in store, for Premier League football at least. Consider how its previous incarnation will be viewed when the dust has finally settled, when people have stopped dying in large numbers, when hospitals have a few ventilators spare, when stadiums start to fill again, when the old songs are reunited with their fans – will nothing have changed, in our mind’s eye? You don’t think that, after that frightening shock of a raw apex of reality bulging into view, plus whatever the economic hangover will be, the whole moneyed, adolescent cluster-fuck of Premier League football won’t seem like something of an old taste?

You know now, for sure, something is more important than a VAR debate, and that sense will haunt every attempt by every pundit to claim otherwise. Talk of feverish transfer speculation will remind you of other fevers you have known.

Now look here, you might say. I found its Instagram-ready, self-obsessed, narrow-minded aesthetic pretty unpleasant even before coronavirus and a fat lot of good it did me – I just had to hold my nose, suck it up and watch because I love football, helplessly and forever.

The one ace in the hole the rule-makers always had was that they could keep supplying you with more football to watch. It bestowed on them, rightly or not – you sense ‘not’ – a certain credibility: these were, though you loathed the very sight of them, the people involved in keeping the show of football on the road.

They had, recently, begun to show they truly couldn’t organise a piss-up in a brewery – publicly yearning for the barren opulence of a European super-league, adding vibe-destroying extra teams to every international tournament, shipping finals off to the distant lands of kleptocrats and oligarchs – but nonetheless, the football continued. And when it came right down to it, that was all you cared about. Its continued presence was just enough to help you forget how you disliked so much about it.

This is, you’re probably all too aware, the first time in your life you’ve had this time of year to think about football without having any actual football to govern your thoughts. (Ironically, even as I write that, from a diner at Departures in Mexico City’s airport, I glance up to a screen on which they’re helplessly playing re-runs from the postponed Mexican league.) A hiatus from what we were: inextricable creatures of the football schedule. But it’s hard, everything considered, to imagine us returning in the same state of mind.

I know that to some degree we’ll all be manically itchy to watch football again, no matter what, whenever that time comes. But we shouldn’t underestimate the lasting effect it will have, what we’re going to go through with this little virus of ours. How much more tightly the experience will bind our collective hands to the sense that there’s a reality out there with a power which goes above and beyond the ways that we seek, as a species, to entertain ourselves. The power of all these idiots, all these obnoxious behaviours that swamp modern football, rests solely on the fact that they could say – yes but, football.

Now we know different, at least regarding its security, its ability to overcome all other realities. And I’d be surprised if our tolerance for them as a group, the players who earn as much in a year as 20 nurses in a lifetime, that baldy, puzzle-browed ballbag doing his obsequious bantering in Zurich before the next group draw, the presences lurking over the clubs, as unfit as Mike Ashley, as improper as a quick chat with some Saudi diplomats at the consulate in Istanbul – will remain so attached to our old sense of football’s reality. We know now, for sure, when shit gets real, none of them have a clue. They simply ride the coat-tails of our old-fashioned needs.

So when the football comes back, as it will, remember the coarse brush with reality that you’ve just had, remember what it showed about the power these people really have. To follow them back into an adolescent view of football, to buy into the narrative they will seek to re-insert about returning football to its rightful perch as the most important force in our societies, with them as crucial arbitrators, is to be a servant to people who are weaker than you. And who, in their right mind, would do that?

Remember they’re clueless and enjoy the game, cos that’s really all it is. Reality comes first.