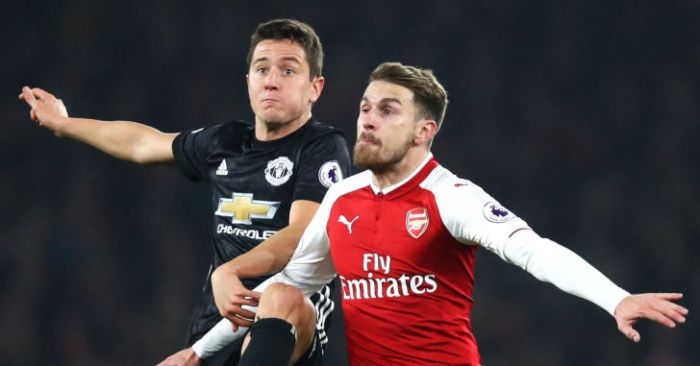 As Chelsea look set to lose Willian and Arsenal try not to lose Pierre-Emerick Aubameyang for nothing, we look at the most valuable player lost for nothing by every Premier League club. We’re not talking released kids but senior players…

ARSENAL: Aaron Ramsey (2019)
A cock-up of epic proportions. They offered him a contract so late that there was already the golden carrot of a £400,000-a-week contract elsewhere. Keen to avoid a repeat of the Mesut Ozil situation, they instead created an Aaron Ramsey situation to add to the pile of situations that they are now desperate to avoid at all costs. As Ian Wright said at the time: “At his age, he’s worth at least £30-40m. Juventus are saving so much money even with what they are paying him. It is a move that makes sense to everybody other than the club he is leaving.”

ASTON VILLA: Olof Mellberg (2008)
The real quiz is how they somehow held onto one of the Premier League’s most accomplished defenders (and sexiest Swedes) for seven whole years. He was punching so far below his weight that Villa fans could only applaud when he signed a pre-contract agreement with Juventus after he had moved to right-back to accommodate *checks notes* Zat Knight. His last game for the club was designated Olof Mellberg Day as he gave every fan a shirt with his name on the back. What a man. What a beard.

Legend of the week
Olof Mellberg
Villa supporters were left with a lasting impression of Olof Mellberg.
The Swedish international arranged for everyone of the 3,200 who made the trip to West Ham for his farewell match to be presented with a replica shirt as his parting gift. pic.twitter.com/01xBYHJyWL

BOURNEMOUTH: Ryan Fraser (2020)
It’s happened. He’s gone. And can we all agree that refusing to play in their relegation battle was something of a c***’s trick? Let us all join in hoping that his options this summer are more Watford than Arsenal.

TOP TEN: Players who have regressed the most this season

BRIGHTON: Tomor Hemed (2019)
Nobody ever leaves Brighton, which is both a blessing and a curse. When it became clear that the Israeli international had no future at the club, they remembered the goals that helped them into the Premier League and granted him a free transfer to Charlton. As Graham Potter said: “There’s no doubt he’s been a great player for this club. He played an integral part in winning promotion from the Championship, and scored some crucial goals in the Premier League.” A year later, he has scored exactly zero goals in 16 Championship games for the Addicks, who suspect they might have overpaid.

BURNLEY: Jeff Hendrick (2020)
“I just felt on this occasion it was advice given a long time ago, to foresee these challenges and they could probably have been sorted a lot sooner. We’re in a good place financially, so that’s probably why it is so surprising,” said Sean Dyche last month in rare criticism of the Burnley board who allowed Irish international Hendrick, Aaron Lennon, Adam Legzdins and Joe Hart to depart the club this summer. So the last game of Hendrick’s four-year spell at the club was a 1-1 draw in which he committed more fouls than he created chances, which all feels rather apt. Next? Well…

Jeff Hendrick to sign with AC Milan in the next few days.

CHELSEA: Joe Cole (2010)
When this feature is dusted down again, the name of Joe Cole is likely to be replaced by that of Willian. Cole left along with Michael Ballack in 2010 when their wage demands did not quite match their importance to the club. Cole joined Roy Hodgson’s Liverpool with captain Steven Gerrard proclaiming: “Messi can do some amazing things, but anything he can do Joe can do as well, if not better. He used to shock us in training by doing footy tricks with a golf ball that most players can’t even do with a football. I really fancy Joe for the [player of the year] award this season.” SPOILER: He did not win the Player of the Year award.

CRYSTAL PALACE: Yohann Cabaye (2018)
“It’ll be a question of how his negotiations go with the club; he’s a really good quality player. He will have other options on the table because players of his quality get offers,” said Roy Hodgson, facing the prospect of Palace losing the handsome and brilliant French midfielder on a free contract. Eventually, the lure of Dubai money was too great and Cabaye headed for Al-Nasr, where he lasted just a few months before joining Saint-Etienne last summer. At 32, was he just too young and inexperienced for Palace?

EVERTON: Wayne Rooney (2018)
It was supposed to be a two-year deal for the prodigal son, but at the end of that first season, Marco Silva had taken over at Everton and had no place for a 32-year-old who had not scored since December and was earning £150,000 a week. So he was waved off to Washington with a fickle heart and a bitterness, saying: “Everton is the club I grew up supporting I was delighted and grateful to go back last summer but in football you never know whats round the corner. I’m sure there are questions about why I left and the people who want to know can ask Everton and let them answer.” We think it might have been the £150,000 a week and the slowness, Wayne.

LEICESTER CITY: Leonardo Ulloa (2018)
There may have been a small fee involved here – Premier League champions rarely come for nothing unless they are earning £150,000 a week and the new manager wants to sign Richarlison – but it would have been nominal as Mexican side Pachuca took on Leicester’s former record signing. The Foxes no longer had any use for a player who claimed he had been “betrayed” by Claudio Ranieri as he agitated for a move to Sunderland of all places. Last seen playing (and scoring) in the second flight of Spanish football, Leicester should surely have claimed a few million from a Championship club.

LIVERPOOL: Steve McManaman (1999)
So underrated that we initially forgot him for this list. He broke the mould by forcing a free transfer move to Real Madrid at a time when we weren’t really used to the idea. Jamie Carragher later defended him, writing: ‘Despite being accused of greed, Macca also lost money to secure the move. He was one of the lowest earners at Anfield (for years), despite being the top player, because he’d refused to sign a new contract. Financially he took a big risk, putting his career before money. I respect him for that.’

MANCHESTER CITY: James Milner (2015)
Liverpool’s greatest ever free transfer signing by some margin. Milner was offered a substantial pay rise to stay at Manchester City but he decided that 18 Premier League starts as a utility player could not satisfy him at the age of 29 and wanted one last move and a chance to feel important again. It has gone pretty well.

MANCHESTER UNITED: Ander Herrera (2019)
They took him for granted and then when they decided that they might want to keep their 2017 Player of the Year, he felt disrespected. “It was not about money,” he said recently. “It was not about the duration of the contract offer. In my opinion, I waited too long (for an offer) and deserved more attention from the club. I was a player that gave everything. I never complained. I never went to the media to complain about anything. I never put a bad face to any manager, to any member of the board, and they waited until I had five or six months left on my contract.” Silly, silly buggers.

NEWCASTLE UNITED: Michael Owen (2009)
“I hated it. I couldn’t wait to retire at the back end of my career because I wasn’t me,” said Michael Owen, who was happy enough to hoover up over £100,000 a week at Newcastle and then leave for Manchester United on a free transfer at the end of a season that featured Newcastle’s relegation and no goals from EMO beyond January. Bizarrely, he was still only 29, meaning he had joined Newcastle as a 25-year-old has-been.

NORWICH CITY: John Ruddy (2017)
Goalkeeper John Ruddy was one of seven senior players who left Norwich in 2017 as the club tried to cut the wage bill and freshen up a squad that had failed to get promoted back to the Premier League at the first time of asking. “For reasons other than football, it was a decision that was made,” said Ruddy, who jumped ship to Wolves and a far more successful promotion campaign. And there he remains…cursing the fitness of Rui Patricio and making occasional cup appearances.

SHEFFIELD UNITED: James Harper (2010)
If you’re a good Yorkshire club, you don’t let anybody leave for nowt, so we have to go a long way back – to when the Blades were frankly terrible – to find former Arsenal trainee Harper, who left after a short-term deal for a spell at Hull that should have never really happened. “I left Sheffield United, I had Leicester come in, Crystal Palace, Swansea, there was about five teams but my agent wanted me to go to Hull because they were paying the agent fee,” he said years later.

SOUTHAMPTON: Cedric Soares (2020)
It’s unlike Southampton to allow this to happen but Soares held all the cards as soon as he decided that his best chance of joining a prestigious club was to allow his contract to run down. “It’s a great opportunity and it’s something (being out-of-contract) that maybe happens once in your life for a player,” said the Euro 2016 winner who saw one loan spell at Inter Milan come to nothing but a second at Arsenal lead to a four-year deal even before he had played a game for the Gunners.

229 – It took Cedric Soares 229 seconds to score as many Premier League goals for @Arsenal as he did in 120 appearances for Southampton (10,090 minutes). Impression. pic.twitter.com/PxaTd48aKr

WATFORD: Seriously no bloody idea
There are a fair few ‘free transfers’ or ‘undisclosed’ moves to Udinese so we shall leave this one (kind of) blank.

WEST HAM: Demba Ba (2011)
Seven goals in 12 games could not save West Ham from relegation so off Demba Ba toddled, activating the relegation clause placed in his contract when he signed from Hoffenheim in July. The move had very much served his purpose, those seven goals earning him a £45,000-a-week pay package at Newcastle. He is now 35 and still scoring goals in Turkey; it’s simply what he does. West Ham missed him rather more than they are missing Andy Carroll this season.

WOLVES: Bakary Sako (2015)
After 12 goals in League One and then 15 in one season in the Championship, Sako clearly thought he had outgrown Wolves. This, of course, was the old Wolves, who could be outgrown by a winger who would join Crystal Palace and never achieve much of anything there at all. Despite Wolves eventually outgrowing Sako and his Championship ilk, they would have surely liked to have at least got their £3.5m back.