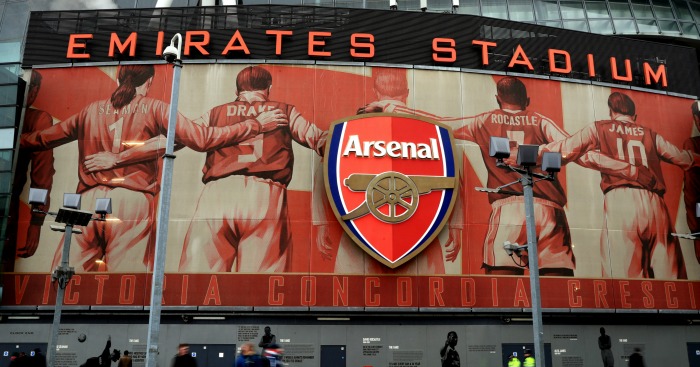 Before the famous internet army comes down on me like Gabriel Paulista stumbling into a left winger, this marks the start of a new – and not entirely serious – series examining the worst aspect of every Premier League club. We start with Arsenal because without the alphabet, life has no order…

Worst thing that other fans think of them
Fans of most other clubs see ‘generic Arsenal supporter A’ as entitled to the point of parody. The accusation is that Arsenal are as spoilt as a child throwing a tantrum because his nanny forgot to salt the tagliatelle water when making supper. “But Charlotte, it just tastes frightfully beige. And no, Champions League qualification isn’t enough. Nobody at school is impressed by that.”

See also the way in which Arsene Wenger holds out his arms in front of him when all is going wrong as if to say ‘How did this all happen?’ in order to demand sympathy for a club who have established themselves as a financial superpower in a new stadium and with extraordinary cash reserves.

Worst signing
There have been worse players in an Arsenal shirt than Sebastien Squillaci, but none highlighted Arsenal’s fall from grace better than a central defender signed for £4m on a three-year deal worth a reported £50,000 a week. He played his first game for Arsenal at the age of 30 but seemed so many years older. And not in a ‘Gosh isn’t he so knowing and wise’ way.

Having pulled a Dimitri Payet to engineer a move away from Sevilla, Squillaci took the No. 18 shirt after the departure of the equally successful Mikael Silvestre, made a series of high-profile mistakes, ran at an average pace that would embarrass a snoozy mollusc and stayed for three years before joining Bastia.

Squillaci is most famous for having one of the most haunted faces in Premier League history. Every expression screamed ‘I’ve seen things that would make you sh*t the bed before you’d even turned off the light’. Highlights reels of his own defending, I guess.

Worst kit
Arsenal’s away shirt between 2002 and 2004 looks like the France rugby team’s training top. The navy I can understand. The red trim I can even enjoy, apart from the bit where it stops being a trim and instead collides with the middle of the shirt halfway down the front. But that god-awful pattern? Heck no.

1. The netting in which you would expect to find satsumas or an old-fashioned set of garden boules.

2. A side-on representation of the seismograph for the 1906 San Francisco earthquake.

3. A screenshot of the bizarre videos Windows Media Player used to produce when you played music without a video. This one is Darude’s Sandstorm.

That’s the important stuff done. Now, how creepy is the mascot?
Gunnersaurus is the Kerry Katona of Premier League mascots, easily the most famous member of an otherwise forgettable group who should not take that as a compliment. He’s even got that vacuous stare into the middle distance.

There is a rumour about Gunnersaurus that regularly appears on club forums and message boards. The apocryphal tale is that at one mascot get-together, Mr Rex was conspicuous by his absence halfway through the evening. Moonchester and the Moonbeam were sent off on a dinosaur hunt, and subsequently peeped over a toilet cubicle to find Gunnersaurus doing unmentionable things to himself while watching The Land Before Time on his iPhone.

This story has never been confirmed nor denied, but I’m choosing not to believe it. Disproving the innocence of Gunnersaurus is like finding out that your ‘father’ actually only arrived on the scene when you were two and that your birth father is an unknown sailor who came into port an… anyway, enough about Christmas 1997.

Worst celebrity fan – Piers Morgan
Before Piers Morgan’s paper was allegedly hacking phones, before he was standing alongside Nigel Farage as one of the pillars of British fascism and before he was provoking Twitter users to do great numbers with words such as ‘wanktuba’ and ‘arsegibbon’, Morgan was just a plain old Arsenal fan. Ish.

Like every other self-aggrandising, self-serving, self-absorbed and self-just-about-everything-else middle-aged, white male, Morgan has deliberately shifted something that used to provide him with joy into an affectation of his shtick. He’s there watching on television from his ivory tower, begging Arsenal to lose so he can send another lofty tweet about Arsene Wenger while frotting himself into another smugasm.

It’s enough to make the rest of us want Arsenal to win the title just to see Morgan unable to fully partake in a shared moment of unadulterated happiness. He’d almost certainly try and take credit for it through a splurge of social media humblebragging, further emphatic proof that there is no more unpleasant phrase in the English language than ‘I’m not afraid to say what I think’.

Greatest own goal
The greatness of any own goal can be roughly judged by its distance from the goal, the lack of pressure on the player committing the sin, the style – would it be deemed great if an opposing player scored it? – and the lag time, namely the time between the moment when everyone else knows what is happening and the moment when the players involved realise. In 1991, Lee Dixon achieved high marks for all four. Just a shame football hadn’t been invented yet.

Worst chant
I don’t care if it has never been sung within 50 miles of the Emirates. I’ve just watched it and now so must you; sharing is caring, or at least diluting. Now count how many times you catch yourself singing “Xhakaboom” as you wander about your daily life…

As soon as he said 'Xhakaboom' I cringed so much. Embarrassing pic.twitter.com/imGcl9FWIh

Weirdest club shop item
It really should be the Rubik’s Cube, if only for the glorious metaphor for Arsene Wenger getting one element of Arsenal’s house in order only to look at the other side and see a jumbled mix. But then you click on the ‘Figurines’ section of the website, and something immediately grabs your attention. ‘Mesut Özil – 16-17 Home 1:10 3D Figurine. £79.00.’

There’s a lot to unpack, here. Only Ozil and Alexis Sanchez are available, with the only logical explanation being that the club have sold out of the other players. The rest of the squad and manager must settle for three-inch high models that used to be called Corinthian football figures but are now branded SoccerStarz because capitalism is bad and nothing quite speaks to youth culture like adding a ‘z’.

Some investigative reporting (Youtube video) indicates that these are 3D-modelled and printed figures using innovative technology by a company based in Berlin, which is reflected in the kind of price tag that makes you find the nearest basin to wash your face and hands.

‘Experienced 3D specialists are at work for you at STARAMBA, perfecting every single character in complex manual labour. Both modern technology and craftsmanship ensure that our models look like the original,’ says the website, ignoring the honking great elephant in the room which is politely asking why anyone would pay £79 for a small and useless version of an action man?

And you all wasted your time protesting about £97 tickets?