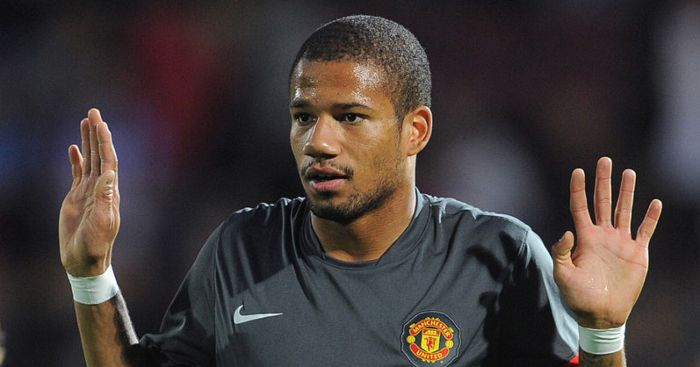 Marco Boogers was our last inductee. He kindly passes us on to Manchester United’s sweet Bebe…

The quote is as uplifting now as it was endearing yet unorthodox then. “I had a dream of playing for a major club. That dream has come true,” was precisely the sort of glib platitude that accompanies most transfers. But the next line emphasised just how much this was a deal like no other.

Those are not the words you would ordinarily associate with footballers. And that is not a criticism but a fact: most players seem predestined to enjoy at least a financially viable career from a uniquely young age, entering the profession in their adolescence at development level and gradually working their way up. For the majority, that linear path is all they have known, give or take a couple of inevitable obstacles. Football cannot change their lives because football has always been their lives.

But when those four words were uttered, there was never a sense that Bebe was reading from a script or recalling one of many pre-rehearsed lines; that was simply his truth. It may not have struck a chord then but it certainly does in retrospect. Manchester United themselves once described him as ‘one of the most astonishing transfers’ for myriad reasons, not least the player’s own remarkable story.

The plain numbers tell quite the tale. Bebe had only just turned 20 when he left Estrela da Amadora over unpaid wages in June 2010. As recently as that same month, he was still living in the orphanage where he had resided since being abandoned by his parents at 12, the homeless shelter at which he learned to read, write and play football, where he still visits to bring Christmas presents to those he considers “basically family”.

Vitoria Guimaraes felt compelled to gamble on his precocious talents and agreed a five-year contract with a €3m release clause. After a single season of semi-professional football in Portugal’s lower leagues, it was a modest long-term outlay.

Five goals in six pre-season games for his new club attracted enough attention for a fresh contract to be quickly renegotiated. Vitoria raised both Bebe’s wages and his release clause, which now stood at €9m. It was basic business, a club protecting its investment, as it would again when it proposed yet another pay rise to go with a further increase to his release clause – €15m – soon after.

It was too late. The sharks had already started to circle.

Real Madrid were interested. Benfica, too. But United stole a march on both to secure their biggest signing of a summer that saw Javier Hernandez and Chris Smalling move to Old Trafford. While Vitoria may have been unsuccessful in their attempts to guarantee an eight-figure sum, the final fee represented their record sale, more than double that of the previous holder. They revelled in having “flipped” a player from free agency to €9m departure within 48 days. Quite right.

United’s chief executive encapsulated the uncharacteristically impulsive nature of the signing. “He’s a player we’ve been following but he really came on the scene in the last week or so,” said David Gill. It soon emerged that Sir Alex Ferguson, for the only time in his 39-year managerial career, had sanctioned the purchase of a player he had never seen; player and manager only met a day before the deal was announced. Questions were justifiably raised – who first spotted him, how many times was he scouted and had one of the most famous teams in the world genuinely just signed someone based solely on a decent pre-season? – yet answers were either not forthcoming or simply inaccurate.

Almost every British outlet carried the line that Bebe had come at the recommendation of former United assistant Carlos Queiroz, with Ferguson referencing a mysterious unnamed ‘good scout’ as having ‘flagged him up’. But Queiroz himself dismissed the former theory as lazy dot-joining in 2014, stating “Bebe was not even part of our scouting files for the national team of Portugal” and “I knew nothing about him”.

Such was the general surprise that Portugal’s newspapers barely covered the story. O Jogo was the only sports edition to consider it front-page news. Their headline of ‘Unexpected, quick and tremendously efficient’ was not an evaluation of the player’s strengths.

The part of Jorge Mendes, as ever, should not be underplayed. He had dealt with United before, helping arrange the arrivals of Cristiano Ronaldo, Nani and Anderson to Manchester. His involvement in the Bebe deal caused enough controversy to provoke a police investigation after fellow agent Goncalo Reis complained that he had been replaced as the player’s representative just two days before he signed for United. The inquiry came to nothing, Vitoria president Emilio Macedo described Mendes as “the bulwark of the transfer”, club accounts confirmed he received €3.6m of the €9m fee, but official accountability of who first identified Bebe and who engineered the deal is difficult to come by.

So, too, confirmation as to why United saw fit to sign him. The Guardian said that he would be ‘the eighth senior striker at the club’ when he joined, rather encapsulating the confused mood: Bebe had long since considered himself a winger at best.

The intrigue, by the time of his debut, was palpable. With YouTube compilations scarce and training clips insufficient, the world waited with bated breath to catch a glimpse of the player Ferguson was willing to break the habit of a career for.

Yet the Scot was not even in the dugout when that moment came. Bebe made his bow in a League Cup third-round tie, thrown on for the final quarter of an hour away at Scunthorpe by Mike Phelan – “careca” – while Ferguson embarked on a Champions League scouting mission in Valencia.

Bebe would only play six more times across four different competitions. He scored in his one Champions League game, a well-taken goal from a Paul Scholes pass at Bursaspor, to add to a deflected strike against Wolves in the League Cup. Short cameos actually suited his explosive pace and power. The problems came when he was required to play for longer.

He spent his 64 minutes against Wolves in the Premier League in November 2010 delivering aimless crosses at an increasingly exasperated Old Trafford, being substituted after himself replacing the injured Owen Hargreaves in the first half. Later that same month came a half-time mercy removal during a 4-0 League Cup defeat to West Ham. Then February brought Bebe’s last appearance in a United shirt: an insipid FA Cup performance against Crawley from which he would never recover. He managed to technically outlast both Ferguson and David Moyes, but Louis van Gaal was never likely to offer an olive branch.

Perhaps the most curious aspect of a United career that spanned 335 minutes and six months but actually lasted until his sale to Benfica in summer 2014 was that Ferguson genuinely rated Bebe. He included a few effusive paragraphs on the player in his 2013 autobiography when most would have expected the matter to have been brushed under the carpet.

‘Our scout told us, “We need to watch him.” Then Real Madrid were on his tail. I know that’s true because Jose Mourinho told me Real were ready to sign him and that United had jumped in front of them. We took a wee gamble on it, for about 7 million euros.

‘Bebe came with limitations but there was a talent there. He had fantastic feet. He struck the ball with venom, off either foot, with no drawback. He was not the complete player, but we were coaching him to be better. On the big pitch his concept of team play needed work. With feet like his he was capable of scoring 20 goals a season.’

From the greatest manager in the history of the sport, that is no small compliment. Ferguson’s defensive press conference declaration that “there’s material there” was not lip service. It’s just that neither party was able to turn material into something substantial.

Bebe would later admit he “never took Manchester United seriously” and was guilty of “messing around too much”. “I thought, ‘I’m here, I’m doing well and I don’t have to try hard every day’. It was my fault,” he added, but this is not a situation where blame should be apportioned. This was a player whose entire life had been completely transformed, and a club that understandably struggled to cope with that challenge. Bebe went from homeless teenager starring at the streetfootballworld tournament in May 2009 to a Manchester United player little over a year later. He skipped the entire concept of youth football development and became a professional at 20. Neither he nor they could possibly be equipped to deal with that sort of metamorphosis.

As it is, the story of Bebe offers a refreshing outlook: that scaling the mountain before sliding back down need not necessarily be characterised as failure. He will forever be known in many circles as a ‘flop’ but he fell from a pedestal previously unfathomable to him, and has since found his footing.

It might not be the Hollywood ending of trophies at Old Trafford and international honours with Portugal, but Bebe has taught us that is not football’s be-all and end-all. Abandoned and placed into the care of the Catholic church before he became a teenager, he has since scored goals in Primeira and La Liga, been part of a title-winning Benfica squad, won the Segunda Division with Rayo Vallecano and impressed in games against Barcelona and Real Madrid. Call him a Manchester United ‘flop’ and he will kindly inform you that they and football changed his life.