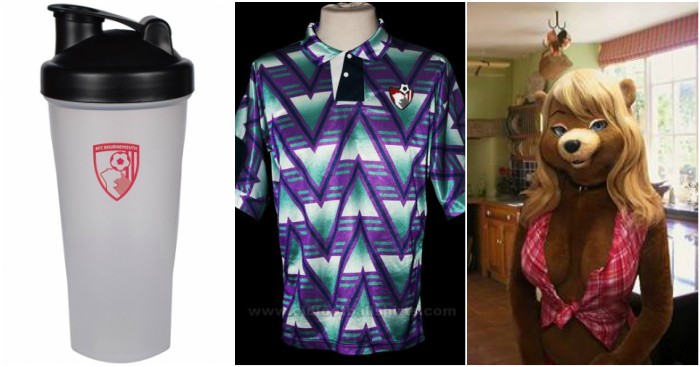 The second in our emphatically not serious regular series – go read Arsenal – is Bournemouth. If AFC Wimbledon get to the Premier League, will everyone forget about their ‘AFC’ too?

Worst thing that other fans think of them
If it is possible to be too nice, then that is Bournemouth’s greatest crime. Bournemouth trying to do nasty is like your little brother putting on a Stone Island jacket with inbuilt goggles for an away day with his mates, but still giving your mum three rings when he gets there.

I wonder if some Premier League supporters, particularly of the smaller clubs, are also getting a little peeved by the widespread frothing over Eddie Howe by the media. A fine manager of course, but Howe has escaped any criticism for Bournemouth’s ropey defending over the last three months in an attempt to paint him as the Last Great Hope of English coaching. That’s what Tim Sherwood being the most recent English manager to finish in the top six does to a nation.

Finally, the modern desire to label everything unexpected as a miraculous fairy tale is a bit sickening, given that Bournemouth’s owner Maxim Demin is reportedly worth hundreds of millions of pounds. In my head, Demin is actually called Maxim Denim, who sounds like the hero of a Levi’s advert set in the year 2109.

Worst signing
In July 2012, Bournemouth signed Lewis Grabban for a fee of around £300,000. He did very well over the next two seasons, scoring 35 league goals in League One and the Championship, and was then sold to ambitious fellow Championship side Norwich for £3m while Bournemouth spent the money on the rather younger, rather better Callum Wilson.

Now the story gets silly, and by that I mean Eddie Howe lost all sense of logic and reason. Having scored 12 league goals in 36 games as Norwich were promoted, Grabban played only 250 minutes in Norwich’s first five months back in the Premier League with a return of one solitary goal.

Rather than conclude that Grabban was clearly not good enough for the top flight, that persuaded Howe to part with £8m in the January window to re-sign a striker he’d sold 18 months earlier for just £3m. Cue shock aplenty when Grabban failed to score a single league goal and started just four matches. If this were Harry Redknapp, we’d be asking for the name of his pet and the year of his birth.

The answer to your next question: On loan at Reading.

kit
Easy one this, because Bournemouth’s away kit between 1992 and 1994 was sensationally bad. The early nineties were not a time of sartorial elegance, but even that excuse only removes 5% of the culpability for this monstrosity. Not only does it look like a cross between a Magic Eye image of a medieval castle and the result of a man on acid being given a set of felt-tip pens and asked to draw his representation of illness, but Bournemouth overlooked the classic problem with snazzy kits: the sponsor.

Frizzell – a financial services company bought out by Liverpool Victoria in 1996, business fans – presumably didn’t want their logo to be lost in a sea of colourful migraine, and so insisted on placing said logo on a black background. That made the whole kit look like it was designed on Clipart by a small child with access to a computer and unlimited Haribo.

That’s the important stuff done. Now, how creepy is the mascot?
A good test for spotting a wrong ‘un living in any town but Bournemouth is to ask them the name of Bournemouth’s mascot. Anyone who gets Cherry Bear correct can be reported to your local police officer. You’re welcome.

It’s not that Cherry is creepy, just mind-nu

mbingly tedious. He is generic mascot A, a bear with big eyes and a silly smile. This is the mascot you would expect to find at the side of any middling college basketball game in America, hugging a cheerleader for a little bit too long, played by a man who will eventually go on to be incarcerated for a string of public indecency offences.

Bournemouth’s only attempt to make Cherry relevant is to have him wearing a baseball cap on sideways, which is staggeringly uninspiring. It’s like the nerd teacher at school whose only concession to non-uniform day was to wear a Looney Tunes tie and insist on ending all eight of his lessons that day with “That’s all folks!”.

Cherry’s only controversy was an unfortunate incident on an away trip to Tranmere Rovers in August 2010, when he was caught in a hotel room with the wife of Blackpool’s Bloomfield Bear (pictured right) and three jars of manuka honey. Still, a disciplinary warning sufficed and he hasn’t put a paw wrong since.

The elephant in the room here is Cherry’s full name. Given that he was first born (?) in 2006, when Labour were still in power, is there not a fair chance that our mascot is named as a tribute to Cherie Blair? If that’s true, this is the start of my campaign for more football club mascots to be named after the partners of world leaders. I’m thinking Miss Hull Obama, AC Milan-ia Trump and AS Nancy Reagan.

Worst celebrity fan – Celebrity? They’re struggling for the fans bit.
Nothing sums up the rapid rise in Bournemouth’s rise than the following short exchange on a club forum on the subject of celebrity fans:

‘AFCB_Suze: Just heard a guy from The Klaxons on Talksport talking about being a Bournemouth fan. Didn’t seem to know who Jeff Mostyn was though! Hmmm.

‘NWCherries98: We have Seth Rogen as a fan thanks to Soccer AM’

The only other documented known supporters are Jayne Middlemiss and Matt Tong, the drummer from Bloc Party, though there is a report that the players partied with Dane Bowers in Las Vegas after winning promotion. In the photos, Bowers has the haunted eyes and stubble of a man who is living a Groundhog Day where he fails to re-find fame in increasingly elaborate ways. Have you ever seen anything more bleak than this image, in which a former pop star covers his tubbiness with a t-shirt while taking a video on his mobile of beautiful women and professional sportsmen wearing next to nothing? No, you have not.

Greatest own goal
Look, I tried to find one. I even sat at my desk and asked Twitter for their recommendations. Unfortunately, none were fruitful, not least because every Google search for ‘Bournemouth own goal’ returns one suggestion, this number by Minnesota United goalkeeper and Cameroon international Sammy Ndjock.

In fairness, it’s a f**king great own goal.

Worst chant
Even less clue here than for the own goal, but the excellent Narrow The Angle makes a truly wonderful point: The Ted MacDougall Stand (typically where the Johnny-come-lately fans sit) sing en masse at big teams “We support our local team”. To which my reply to about 50% of them would be “well, you didn’t when we were in League Two, did you? You just watched United and Arsenal on telly like the rest of your mates.” Hear hear.

Weirdest club shop item
‘Bournemouth’s online superstore’ really is an inappropriate description, like fun-size Mars bars and Happy Hour at a pub between 3pm and 4pm. It consists of six sections, of which four contain items of training or match-day kit.

Yet there are three golden nuggets to be found. The first is the array of drinking receptacles, which inadvertently provides a sorry indictment of the town’s menfolk. No coffee mugs to be found, the typical staple of the football club stash, and no novelty teapot either. Instead, an insight into the life journey of any male Bournemouth fan: Pint glass, protein shaker, brandy glass. Glorious.

Next is the club’s entire collection of four DVDs, sold via a majestic pricing system:

“Sandra, it’s weird that we still have loads of those DVDs, isn’t it?”

“Not really, Barbara. Not when some clever dick decided that half-arsed friendly defeat was worth ten times the price of glorious promotion.”

However, the DVDs are beaten into second place, because in planning for this piece I spent half an hour silently crying with laughter while trying not to wake my sleeping partner. That’s all because of Bournemouth’s decision to create a ‘gift set’ out of, and I quote, ‘AFC Bournemouth Articulated Lorry And Chocolate Footballs’.

Bournemouth sell no other toys, food items or playthings of any kind. It’s like they’re deliberately trying to create a Googlewhack out of club-themed tat.

Next week: Burnley. Fans of the Premier League and the alphabet will already have worked this out.