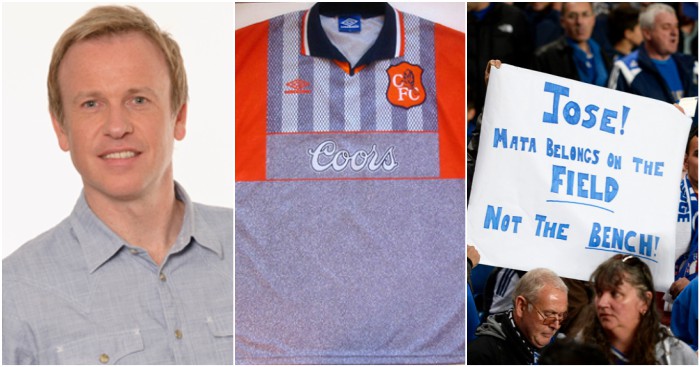 We’ve done Arsenal, Bournemouth and Burnley already. Remember, Daniel hates every one of your clubs…

Worst thing that other fans think of them
Strap in.

Chelsea are a club with plenty of local rivals, but also the team to hate for many ‘neutrals’, the corporate creep of the Premier League boiled down to a thick syrup. They are the entitled, nouveau riche wide boy in an expensive but garish suit who pushes to the front of the bar to order a bottle of “your most expensive bottle Chatto Nurf Doo Pap, sunshine”, before trying to hit on a young lady at the bar while his long-suffering partner waits timidly at the table.

John ‘Pashun of the Christ’ Terry is naturally the leader of this army, the chest-beating hero who bleeds blue if you cut him in two. Or something. It is interesting to note that the simple removal of Terry (I say simple, it took four managers to do it) from the Chelsea team has made them infinitely more likeable. Is that Antonio Conte’s greatest trick?

Chelsea are the geezer’s team from a bland area of London who were the first to truly change the football landscape through deliberately buying success, and so the underlying accusation is that Chelsea’s achievements are somehow ill-gotten. Then you have Roman Abramovich, the standard-bearer of a revolution in English football club ownership which caused a distinct loss of our domestic football heritage. Combine that with a fanbase notorious for the unpleasantness of a minority, and you have a foolproof recipe for attracting contempt.

Worst thing about the ground
The clear and present danger of being caught in the eye with the corner of a laminated A4 sheet calling a player a snake or labelling their new manager ‘the [insert derogatory term] one’. Also the risk of laughing yourself to the point of heart attack over a banner that reads something like ‘Rafa no passion no history I will never take job = 1 desperae (sic) man’.

Worst signing
Chelsea may have more competition for this award than any other club in world football, but Fernando Torres ‘wins’ out. The argument that he scored vital goals is undermined by a whacking great transfer fee and very sad decline.

The clue for Chelsea came during Torres’ spell at Anfield. The striker was majestic during his first season in a Liverpool shirt, but missed 33 games through injury in the following two years. When back fully fit for 2010/11, Torres scored only nine goals in his first 23 league matches of the campaign. It was at that point that Chelsea thought paying a British record fee of £50m was a good idea.

Torres’ 20 league goals in 110 matches cost Chelsea £2.5m a pop, with every one prompting questions about whether the ‘real Torres’ was back. In truth, we would never see it again; a career had peaked before the age of 25.

Chelsea’s 1994/95 shirt is the type you can imagine being worn ironically by supporters now, but that does not negate the truly awful nature of its appearance. The designers somehow found two Pantone colours that have never been seen before or since on a club shirt, added some mesh stripes, changed the colour of the club badge and then set the whole thing on a base that looks like a t-shirt your Dad would wear to play squash with his workmate in.

To truly appreciate the hideousness of the shirt, you need to see it worn. The orange stripes actually sit over the shoulder, with the flecks of orange next to the neck giving the appearance of grey vest worn over orange t-shirt, a tribute to PE classes at the age of six.

The kit’s only saving grace was that Ruud Gullit wore it, and managed to look unfathomably cool in a shirt with flashes of Dutch orange. Mark Stein and Andy Myers, not so much.

That’s the important stuff done. Now, how creepy is the mascot?

Not creepy, but unforgivably dull. When your badge has a blue lion carrying a golden staff with sharp red claws and a tongue that protrudes far out of its mouth, don’t give me a mascot that looks like Generic Lion Mascot #2.

Fun fact: The lion on Chelsea’s badge with its head facing backwards actually represents the club deliberately turning the other way in response to the abhorrent behaviour of captain Terry over a number of years. Classy gesture, you have to agree.

Embracing modern technology, Stamford is the subject of an iPhone/iPad game app in which children are invited to rack up high scores and win prizes by doing kick-ups with the mascot. In-app purchases to buy more coins and improve your character that children will beg their parents to buy? You bet.

Stamford is also home to possibly the worst Twitter parody/fan account bio in social media history, which lists his location as ‘Dr Eva’s Bed’. Presumably the man who created this profile is still sat in his bedroom, laughing at his joke in between going to the gym and telling his friends that “bitches only hold me back” before cry-wanking himself to sleep every night.

Worst celebrity fan – Tim Lovejoy
There is something truly exceptional about the progression of Tim Lovejoy Watford fan to Tim Lovejoy Chelsea fan, inadvertently revealing everything about both this professional man-child and the worst elements of the modern football supporter. Lovejoy is ‘one of the lads’, when even four out of five of those lads think he is a d*ck. He is a man about whom even his best friend could wince and say “yes, I can see how he rubs people up the wrong way”, before showing you the WhatsApp group that Tim doesn’t know about.

The Taylor Parkes review of Lovejoy on Football will go down in folklore as the pinnacle of its art, but it really is worth picking up a copy of the book and reading it cover to cover. It is the perfect accidental character assassination, 269 pages of the self-penned downfall of a bandwagon-jumping, perma-grinning imbecile. Some passages stop you in your tracks as you stare in open-mouthed amazement at the misplaced chutzpah displayed.

Whether it is the 20-page chapter on ‘What I have given to the game’, the section entitled ‘why there will never be a female referee’ or his frequent reminders that being a football fan is ‘all about engaging in banter’, there can be nobody in the sport’s history who has been wider of the mark when it comes to detailing what makes football great. The entire book is a ‘How not to’ guide in avoiding being punched in the street, outside a pub or by a member of your close family.

As @WSC_magazine have republished *that* review it's time to repost this, the moment Lovejoy realises he's not influencing football anymore: pic.twitter.com/E703UZxRJb

Lovejoy is, thankfully, now nothing more than a distant memory to football, forced into his natural habitat of vacuous weekend daytime television. He is the stain on the carpet covered up by a well-positioned plant so you can pretend the sorry incident never existed. And yet he is still, undeniably, Chelsea.

There is also an argument that digging at Lovejoy is shooting a large fish in a small barrel, a tedious pursuit of the uninspired. My instant retort, as ever, lies in that book:

‘There is an unwritten law that states that any woman under 40 that walks around the pitch must be subjected to a chorus of wolf whistles and then a ‘Get your t*ts out’ chant. The thing is, I believe that the women that do go on the pitch know full well this is going to happen – that’s why they always wear high heels and full make-up.’

And there you have it, misogyny and the culture of victim-shaming wrapped up in one shitty paragraph in one shitty book by one shitty man. Lovejoy is not just a celebrity football fan but the worst celebrity football fan. He is the poster boy for a generation of men who fuck around, fuck up and then fuck off. The only pleasing line in the entire book is the one that begins ‘Later, when we were getting divorced’. ‘Yes’, you think, ‘there is a God’.

When people of a certain age think of own goals, they think of Frank Sinclair. So sit back and enjoy this moment of classic Sinclair, where he takes too long to think about which foot to use and ends up performing a brief tribute to Michael Flatley before nudging the ball into the goal. God love him.

Weirdest club shop item?
There is no doubt which items in the Chelsea megastore are the most apt: Diamond-studded silver cufflinks with ‘The Special One’ engraved on one and Jose Mourinho’s signature on the other, and a white Hackett shirt with two tiny Chelsea logos on the bottom. Sold at prices of £78 at £66 respectively (and that’s in the sale) they are both so perfectly Chelsea that our man at the hypothetical bar in the first section is certainly wearing them. The love-in towards their former manager continues with a special edition book of Mourinho-related photographs which originally retailed at £150. One hundred and fifty English pounds!

Yet the weirdest item are the Cesc Fabregas face masks. Down from £4 to just £1, the way they are displayed online gives Fabregas the white eyes of a demonic child walking into his parents’ bedroom to smother them with their own pillows. That Fabregas is one of only two player masks available reveals its true purpose: goading Arsenal supporters. Dearie me.