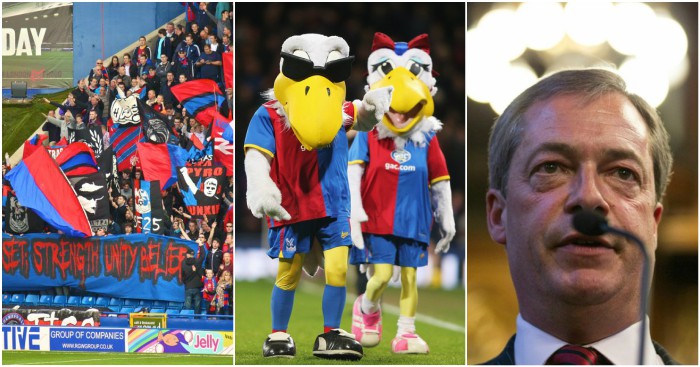 Worst thing that other fans think of them
Crystal Palace are hardly a club that inspires passionate hatred, but there is a dislike from some at the way a section of the club’s support see themselves as the ‘reallest’ football fans in the Premier League. The Holmesdale Fanatics are perhaps the only self-styled Ultras in English league football, which extends to posting ‘South London is ours’ on a Facebook page once a week and dressing all in black.

The noise is tremendous, but the accusation is that there is a fabricated (and slightly dickish) element to the whole Ultra thing. The Holmesdale Fanatics protested after two of its members were banned by the club for crowd-surfing in the stands, and there have been numerous instances of flares being lit and water thrown at fans who won’t sing. It’s South Norwood, not Napoli.

Also, we really do have to talk about the Crystals, the only full-time cheerleading group at a professional club in the country. I get that a club wants a thing, something to make them unique amongst their peers, but Crystal Palace have got Glad All Over before kick-off, they’ve got the rowdy ones in black and they’ve got a sodding actual eagle that flies around the ground. Is that not kooky enough?

I’m not having a dig at those who dance, because I know that they pride themselves on that ability and job. It just all feels so Zoo Magazine 2004, a little enclave of “Get your tits out for the lads” in a sport that is, finally, trying to make positive strides towards inclusivity. You can prepare your criticism of my pinko, lefty, PC-gone-mad libtardism right now, but they send a message to young girls in the stadium that their job is to cheer the men playing football, and do so in skimpy outfits.

Worst thing about the ground
Selhurst Park really is a proper football ground, with the smells of frying onions and Bovril seeping out of every grey concrete pillar. Any complaints about restricted views in certain parts of the stadium and queues for the toilets can be ignored; this isn’t the theatre.

In fact, the only ballache of Selhurst is its location, or more exactly getting to and from the location. It is certainly the worst ground in the Premier League in terms of access, and probably the entire country, the only club where you can be sat in your car three miles from the centre spot with close to two hours until kick-off and still miss the first half-hour. It’s like that picture in a Hollywood disaster movie with cars stuck in tailbacks and everyone sat on their bonnets, only the aim is less to escape the alien mothership and more to see Sam Allardyce’s shit-munching grin.

I’ve plumped for Itzik Zohar, if only to use the ‘Zohar, no good’ line. This is a striker so poor that he doesn’t even make the 427 versions of the ‘1990s Premier League players toughest quiz ever’ features, because he would actually be too hard.

Zohar was signed from Beitar Jerusalem for £1.2m in 1997, not a small fee at the time, at the age of 26. He played six times in the Premier League, missed a penalty at a crucial time against Southampton and then was never seen again before being sold to Maccabi Haifa, where he also failed miserably.

Still he does have a belting Wikipedia photo. Every cloud…

Worst kit
I mean it’s obviously this shirt here, but I’m nervous now. Every shirt I pick, somebody politely informs me that actually it is really cool and that I know nothing of fashion. I’m starting to doubt the bootcut jeans, Velcro loafers and brown leather jacket with tassels in my wardrobe.

Surely I’m safe here, just so long as it isn’t a hoax. Oh god, it’s a hoax isn’t it? A subtly planted hoax by Tesco that becomes a magic eye of their logo if you stare at it for more than 15 seconds.

That’s the important stuff done. Now, how creepy is the mascot?
Not creepy per se, but the back story has its moments. Palace’s pair of mascots are Eagles named Pete and Alice. I wondered why you would give them the names of a couple who own a bed and breakfast in Whitby and host swinging parties on every third Thursday of the month, but then I realised Pete and Alice kind of sounds like ‘Palace’, and instead cursed the club’s lack of imagination.

Pete the Eagle has a pair of sunglasses on that give him the look of a seedy sixty-something with greying sideburns who tours karaoke clubs singing ‘You were always on my mind’ and letching at barmaids. Alice has long eyelashes that make the couple look like an avian version of Danny and Sandy in Grease.

However, it gets a little weirder when you find out that Pete and Alice are married in real life, which conjures up images of them going hell for leather at each other on a Tuesday evening in their homemade ‘nest’ (treehouse) to the complaints of the neighbours. I just hope they aren’t allowed to take the costumes home.

Last home game of the season tomorrow. Need to get some beauty sleep! See you at Selhurst! NIGHT ALL! @alicetheeagle pic.twitter.com/7eJoP5RF9f

Oh no, they are allowed to take the costumes home.

And with that, an entire club was burned to the ground before our very eyes.

In an interview – in a pub, naturally – with the Observer in 2014, Farage said that he preferred rugby and wasn’t that keen on football, but was proud to be a Crystal Palace supporter. He even posted a sickly video after David Cameron’s Aston Villa/West Ham cock-up saying “I don’t support West Ham I support Crystal Palace, and we’re going to beat Hull today” in which his lack of expertise on the topic could not have been more evident. You can imagine him saying things like ‘Come on lads, let’s smash these no-gooders into next week’ as an attempt to stir some passion like a lousy Ron Manager impressionist. God I’d love to quiz him about Palace past and present.

Of course Farage is a football fan. Why would this smug-faced parasite miss the chance to curry favour by claiming it? Why would he leave one aspect of our culture untouched by his slimy hands and thus infinitely more pure than anything he has come into contact with? Why wouldn’t he use anything and everything to form part of his faux-charismatic schtick? Why wouldn’t he like football when he’s so anti-establishment and the champion of the working class apart from wanting a knighthood, attending Dulwich College and being a member of an exclusive gentleman’s club in St James’ Square.

Presumably Farage and his ‘men of the people’ associates like The Earl of Dartmouth and Lord Willoughby de Broke have a frightfully good time at Selhurst Park. Meanwhile, the rest of us will cry foul about the transparency of his ‘good guy’ act and use his popularity as a pretty accurate measure of just how truly f*cked this country is and will continue to be.

Didn’t see Tony Popovic doing the celebration the next week did you, Olivier Giroud? Didn’t see everyone going on about genius when Popovic did it, only when a Manchester United or Arsenal player scores a scorpion kick. Yet more big club bias. Pathetic.

Weirdest club shop item
I really don’t know if something has happened with Crystal Palace’s retail suppliers, but they have an astonishing range of accessories. I mean a stupid amount.

How many different types of hats and caps do you think it is reasonable for the online store of a middling Premier League club to sell? Eight? 12? 15 at an absolute push? Well swivel on this one, because Crystal Palace sell 34 different designs of hat and cap. Thirty-f*cking-four?!

If you think that’s a one-off, you’re wrong. Seventeen varieties of scarf, 14 bag designs and six wallets. Who on earth made these decisions? Are the children of south London obsessed with accessorising?

These are not the only oddities, you understand. The weird Gremlin style toys are unnerving, as are the aftershave and perfume that both purport to ‘feel glad all over’ when you ‘splash on the scent of victory’, a phrase that made me feel a little bilious. I’m not a man to be giving romantic advice, but having to answer ‘Crystal Palace own brand’ when asked on a first date what cologne you are wearing is not a strong start.

The winner has to be this, though, the Crystal Palace-themed ‘With sympathy’ card with marble effect background. Because what better way to issue condolences after a loved one’s passing that with a card that has no design features at all other than the background you associate with gravestones and the logo of a football club?