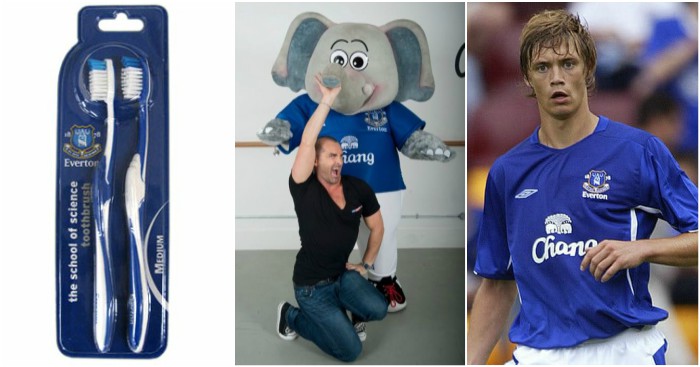 We have done Arsenal, Bournemouth, Burnley, Chelsea and Crystal Palace, and now Everton. This list is going to take sodding ages to put together by the time I get to Swansea.

Worst thing that other fans think of them
On the surface, Everton are a club considered to be friends to all and enemies of none, barely raising a murmur of disapproval. Scrape away that veneer, however, and there is material aplenty.

For Everton supporters are surprisingly venomous online, like seeing a nerdy kid in the showers at school with an unusually large penis. They are incredibly defensive over their club’s players, and woe betide anyone who suggests one of them may be picked off by a bigger club. Most of all, they are fantastically sweary and committed to their arguments, like Father Jack’s surprise debut on the debating team.

The accusation is that this anger stems from Everton being successful once but not any more, but crucially not bad enough (like Leeds United or Nottingham Forest) to sit outside the mainstream consciousness. The suspicion is also that a life living in the shadow of their city neighbours raises the anger levels, like the rebellious little brother. Don’t worry, I’m reaching for the tin helmet.

This idea of ‘big club’ Everton is a line perpetuated by journalists, who grew up at a time when the Toffees were indeed hugely successful. Only this weekend, The Sun’s Charlie Wyett said on Sunday Supplement that Everton were a bigger club than Chelsea, as if none of the last 15 years even happened.

I get it, by the way. Everton are a family club that believes in doing things right, even if rampant commercialism has taken victims at Goodison as well as everywhere else. It’s not pleasant to think that money brings success, but that is the reality. Before Farhad Moshiri’s $2bn rolled into town, Everton supporters felt the same.

Worst thing about the ground
Nothing, other than the occasional restricted view nightmare. Goodison is soaked in character, has the close-knit feel that every ground should have and still has those classic touches of the bygone era. Everything that the new stadium won’t have, in short.

Worst signing
Per Kroldrup was that very special kind of bad, in that supporters have next to no evidence for it but know it to be true. Having signed for £5m from Udinese in June 2005, the Danish central defender suffered a groin injury that required surgery. By the time he was fully fit it was December, and Kroldrup started in a 4-0 defeat to Aston Villa. Thirty-one days later, he had been sold to Fiorentina. Truly a whistlestop tour of sh*tness.

Worst kit
I don’t need some clever sod to tell me that Everton used to wear red (1891-95), but since the turn of the 20th century Liverpool have been red and Everton have been blue. That’s just how it works. 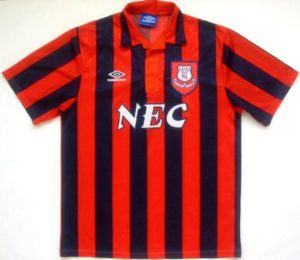 With that in mind, Everton’s worst kit has to be the 1995 away shirt, a combination of red and navy stripes with a shield badge that looked like something you got for swimming 25m in your pyjamas and fetching a brick from the bottom of the pool. The lightning pink and sludgy green away kits from recent years were bad, but this is worse.

Even aside from the red, it looks like the type of boring shirt Malcolm in accounts designs for his fantasy football team after overhearing you talk about the league and insisting he join despite knowing nothing about sport.

“Big points for Andy Carroll this weekend,” he says to you without fail every Friday afternoon. You haven’t the heart to tell him that Carroll is injured, it’s international week and that everyone knows about him sh*tting himself at his desk after curry Friday, despite his colleagues promising to keep the secret.

That’s the important stuff done. Now, how creepy is the mascot?
Until now, the mascots’ greatest crimes have been their lack of character. Changy the elephant is here to change all that.

Firstly the name and the look, for you may have noticed that Merseyside isn’t teeming with wild elephants; even Knowsley Safari Park only has four. Everton may be the self-styled People’s Club, but nothing quite kisses capitalism on the cheek like naming your club mascot after, and styling it on, an animal featured in the logo of your kit sponsor that is also a brand of Thai beer. Even Manchester United and Chelsea haven’t gone down the route of calling their mascots ‘Chevy’ and ‘Yoko’, despite both being actual forenames. Neither of them picked a name for a mascot that an unbearable stockbroker in London might use for his mate who snorts cocaine before lunchtime, either.

However, the true glory of Changy came in 2010, when he visited Pineapple Dance Studios to meet Louie Spence for a pre-season dance lesson in order to film an advert for Sky Sports promoting their new 3D coverage. Incredibly, none of that last sentence is fictional.

This picture of Everton's Changy the Elephant and Louie Spence will never not make me smile. pic.twitter.com/tUaB6O2V8y

I’m not going to beat around the bush any longer here, because you’ve all seen it: Spence is using an elephant mascot’s trunk as a representation of a phallic symbol. Don’t you ever spray water at me with that again, Changy, you dirty pig.

Worst celebrity fan – Matt Dawson
Everton’s list of celebrity supporters is both long and reasonably inoffensive, just so long as you ignore the crimes against music committed by Steps (Lee Latchford-Evans), The Corrs (Sharon Corr), Atomic Kitten (Liz McLarnon), B*witched (Keavy Leach) and Girls Aloud (Nicola Roberts). If you made sugary pop in the nineties and noughties, the chances are you support Everton.

Yet there can only be one winner, heavyweight champion of the banter Matt Dawson, a man for whom ‘going for a cheeky pint with the lads’ has become a way of life.

I can do no greater service to Dawson’s characteristics than the wonderful Jonathan Liew did in 2015, but suffice to say the former England rugby player has hardly learned his lesson. His persona can be best described as Top Gear presenter’s nephew, without the bootcut jeans but very much with the loud pub voice and the over-exuberant slapping of backs. Dawson is the mate to everyone in ‘the industry’ but the friend of far fewer, spending his Saturday evenings in the pub with people who end tweets with hashtags like #DrinkLowDrinkChariot and #RealMenRealAle.

Greatest own goal
It’s retro own goal time, with this famous effort from Sandy Brown in the Merseyside derby in 1969 that is still talked about among Liverpool and Everton supporters. Some own goals arise from players not having enough time to react, while others come from them having too much time. Sandy Brown had more time than most.

Weirdest club shop item
There are plenty of branded items on every club shop website that make me muse over who on earth would buy them. I understand the stuff for children, because kids are both happy by default and absolute idiots who will be tricked into thinking wearing a Superman costume turns them into a superhero. Fools. By that basis, why wouldn’t they want to wear Doncaster Rovers slippers or sleep under a Norwich City duvet cover?

Other items confuse me a little more, but I at least understand the principle. Anyone spending £75 on a smart white shirt with Chelsea logo on the breast pocket needs their head looking at in my honest opinion, but there is no accounting for people desperate to show off their support for their football club. It’s like those men who sit around the swimming pool in 33c heat wearing their Celtic away kit as if any bugger will think ‘Oh goodness, he must really love those guys. He must be the bestest fan ever’.

Then there are the items that are just plain weird, which brings us to the ‘twin pack of Everton toothbrushes’. The first thing to note here is that these are designed for adults. Children’s brushes might be a clever way of getting the little dickheads to adopt some personal hygiene, but that explanation doesn’t wash (ha) here. No, an adult person has to choose to brush a part of their body every morning and night with something that displays the name of their favourite club. Honestly, how insecure do you need to be to reaffirm your support for a football team with a toothbrush?

What I like most is the product description, which spends most of its six bullet points telling you what a toothbrush is. ‘Compact Head for easy access around the mouth’ is it? Oh thanks, Everton, I thought it would be the size of a shoe box and I’d have to rub my teeth up and down against it while resting it on the sink. ‘2 pack’? Oh so that’s what ‘twin pack’ means. Cheers.

Imagine walking home after making your purchase, and bumping into an old flame on the street, the one you never got over, and realise that they are definitely flirting with you. They ask you where you have been and spot your shopping bag.

“Oh, you still follow Everton,” they say with a smile. “You always did love them. I remember you had an Everton clock in your lounge when I moved in. That soon had to go if you wanted me to stick around! Do you still go to the games?”

They peer in your shopping bag, and see a twin pack of Everton-branded toothbrushes, and their face turns grey. “Well, I suppose I’ll see you around. Have nice lif… ermm… I… erm… mean have a nice day.”

As you walk home slowly, you reflect on turning 35 next week. ‘I really must take that clock down,’ you think to yourself.