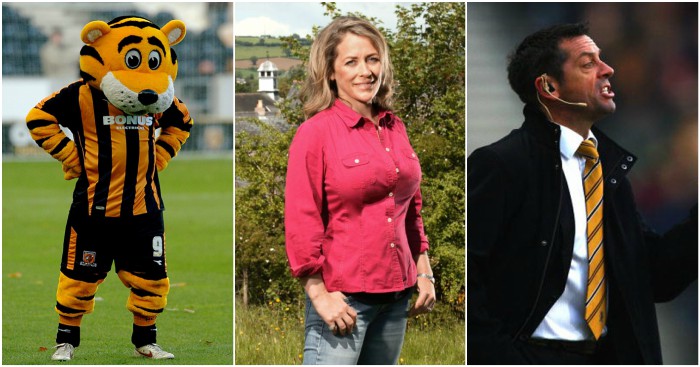 We have done Arsenal, Bournemouth, Burnley, Chelsea and Crystal Palace, and Everton. We go again…

Worst thing that other fans think of them
‘Sarah, what the f*ck do you say about Hull?’

And so began my preparation for this week’s hall of shame. You see the thing is, Hull fans, you really are a forgettable football club. People sympathise with you over an owner that wants to change the name and told supporters they could “die if they want to”, but that just about covers it. Hull are 20th in the list when you’re asked to write down the clubs in the Premier League, after spending a minute working out who you missed. They are the away game you’re happy to skip for the 30th birthday of a friend of a friend.

Hull have survived relegation in two top-flight seasons in their history, when they got 35 and 37 points from 38 matches, and have never scored more than 40 goals in a top-flight season. They are the personification of their list of managers between 2002 and 2016: Peter Taylor, Phil Parkinson, Phil Brown, Iain Dowie, Nigel Pearson, Nick Barmby, Steve Bruce, Mike Phelan. Only Brown raises a flicker of emotion beyond disinterest, and that only because a lot of people thought he was a twunt.

You hear “Premier League club sign England international” on the radio, and your ears prick up. “Hull City have signed Michael Dawson,” the newsreader continues, and you slump back into a semi-comatose state. ‘Hull City?’ you think to yourself. ‘Oh yeah, they’re in the Premier League again aren’t they…’

Worst thing about the ground
The journey, driving forever until you begin to suspect you missed a turning and have entered a glitch in the universe and are simply travelling on a looped piece of road until death or the Apocalypse? Or the ground itself, with wonderful facilities but a chronic lack of atmosphere and the feeling that you could be anywhere in England in an identikit stadium on the outskirts of town?

That second part is a little unfair, actually. The KC was one of the first of those style of stadia, and is beautifully designed with a two-tier section rather than the wave of one-tier seats in which a crowd’s noise tends to be dissipated. It gives the KC the look of a smart cycling velodrome from a distance.

The prices for food and drink are ludicrously expensive, but unless you’ve been asleep since 1985 that can hardly be a surprise. Just a shame the dickish behaviour of the owner means the home seats are regularly more than 30% empty.

Worst signing
It has to be Jimmy Bullard. Cost £5m, was paid £45,000 per week and played 23 games before succumbing to further injuries and retiring to become the banter prince of English sport. You can sympathise with Bullard and consider him unlucky, but Hull had prior warning of his ligament troubles. His was a signing that almost put them into administration. 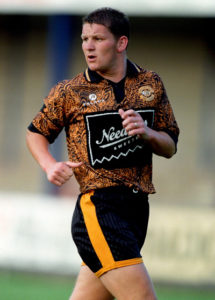 The traditional wisdom is that Hull City’s ‘tiger’ kit is the lowest of their low, appearing as it does in many of those worst kit lists you see during an international break. Yet that is only the verdict of the lazy investigator. For Hull’s true nadir, you need to skip to 1994. See how the horrific black logo (surely the biggest in English football history) is actually welcomed to reduce the eye hangover.

That’s the important stuff done. Now, how creepy is the mascot?
Long before professional antagoniser Kay Burley had inadvertently entertained the nation with ‘sadness in his eyes’, Roary the Tiger (it is really a lion’s name) was doing the same to the children of 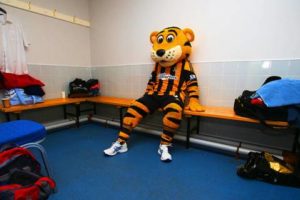 Hull. The club created a mascot who had a paunch, gathered material around his legs (see header image) and the faraway, teary look of an animal haunted by the memories of roaming the sands of West Bengal with his family. That was before he was captured by poachers and shipped to East Riding. It is a problem exacerbated by the cruel coincidence that East Riding is an anagram of ‘I, sand tiger’. Gets you every time.

Luckily, Roary does have a sister in Amber, though they are not related by blood. Even that is soured by the fact that Amber is forced to wear a skirt and a pink ribbon rather than football shorts like her brother, presumably because, according to Hull, girls don’t play football but instead like pretty little dolls. Roary is annoyed as you are about gender discrimination, and is considering taking legal action.

Worst celebrity fan – Erm…
The only two celebrity supporters I could initially find were Sinitta and John Prescott, and neither of those attract a great deal of wrath. Sinitta did have a strong role in the rise of Simon Cowell’s success, for which I can only swear forcibly in her direction, but she will pay for those crimes in purgatory. Prescott is the type of man who calls a spade a ‘bluddeh speurd’, and for that he cannot be chastised.

That leaves us only with Sarah Beeny, the perma-pregnant presenter of television shows I don’t watch called things like Magic Us A Home and House, House: Sell The B*stard. Beeny might look like the type of person that you overhear in a West Brompton delicatessen asking Tarquin if he’d like linguine or spaghetti on Tuesday after “darnce prarctice”, but she actually now lives part-time at Rise Hall in East Riding, and I have seen her in a Hull City woolly hat and scarf. So there.

It’s easy to assume that Beeny is harmless, but then you read this quote from an interview with the Daily Telegraph: “Being an MP would be too frustrating, because you couldn’t make anything happen, you would just have to appease a lot of people. Mind you, being a dictator would be quite fun.”

Yes, “quite fun”. Ergo, Sarah Beeny is having all those children because she’s starting an army, and she must be stopped.

The magic of the FA Cup casts it's spell over Hull City.#Notts #hcafc #crap90sfootball pic.twitter.com/EgaIWC5uKr

Reasons watching this clip is addictive:

1) The way in which the long throw is totally misjudged by both attackers and defenders.
2) Our hero, the diving goalkeeper.
3) The impossibly short shorts of Hull’s No. 10.
4) The Notts County No. 6, who appears to have no left arm.
5) The scorer of the own goal, who actually begins to throw up his arms in celebration. Does he think he’s at the other end?

Weirdest club shop item?
Now I’m not saying that the Hull City online shop is as boring as the club itself, but the ‘novelty’ section contains three fridge magnets and two different types of sticker. Because presumably there is nothing wackier than magnetic fields and absorption.

It does say something about Hull supporters’ desperation to be noticed that the shop sells eight different types of car sticker, including ‘Made in Yorkshire’, ‘Loyal Supporter’, ‘Pride Of Yorkshire’ and ‘No. 1 Fan’. We get it, you like Hull City and Hull.

There is also the toothbrush (specified as for adults), the weirdness of which was covered last week, and a questionable dog jumper which would only make your beloved pet look like a comfort-eating bumblebee, but other than that it’s far too run-of-the-mill for anyone’s (my) tastes. Some of the stuff is even quite tasteful. I’d wear some of the clothes. What is this sorcery?

We want inspiration. We want cheese. We want advertising claims like ‘Wear these Hull ear muffs and you will have more friends’ or slogans such as ‘Spray this Tigrrrr aftershave and jump to the top of the food chain’. You click on the item description for the Hull City boxer shorts and rather than ‘Keep that tiger caged’ you get ‘Black boxer shorts with black and amber striped waistband’. I give up.