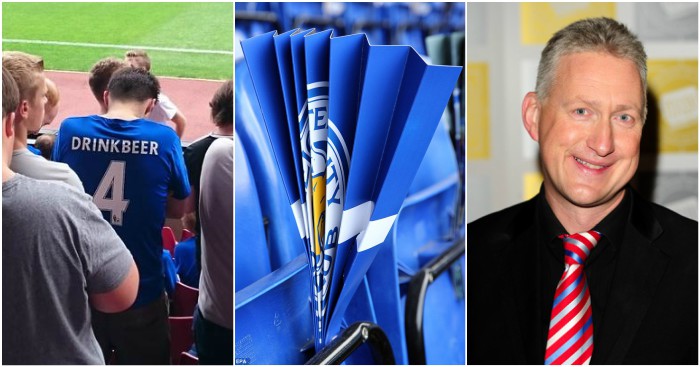 We have done Arsenal, Bournemouth, Burnley, Chelsea and Crystal Palace, Everton and Hull City. It isn’t just your club…

Worst thing that other fans think of them
Until last season, there wasn’t really anything all to think about Leicester. They had that lovely run under Martin O’Neill, made Emile Heskey and played at a wonderfully old-fashioned Filbert Street before moving to the type of stadium that seems like it was designed to dissipate atmosphere.

Locally, the only complaint was that Leicester are a club with no obvious local rivals, and so resorted to manufacturing rivalries against Derby County and Nottingham Forest, both of whom spend far more time and worry on each other. Coventry City should be Leicester’s rivalry in distance terms, but they haven’t played each other for five years and both sets of fans struggle to be arsed either way.

Eleven months on, Leicester have quickly settled back into the periphery, save that lingering feeling of resentment from supporters of at least 40 other league clubs that is fuelled purely by jealousy. There’s nothing to make you feel quite as despondent as “that could have been us” when you’re losing away to Bristol City on a Tuesday evening.

Some will dislike the club for their perceived mistreatment of Claudio Ranieri, but that largely stems from those who issue mournful eulogies about the death of football and decency and decency and football without actually bothering to ask supporters who watch Leicester every week if it was the right decision.

Worst thing about the ground
It’s the clappers, guys. It has always been the clappers. They rival the vuvuzela as the droning noise of choice for someone employed to try and ruin the enjoyment of watching football.

Scratch that, clappers are ten times times worse than vuvuzelas, which at least had some cultural significance at the World Cup in South Africa. Cardboard clappers are an attempt to manufacture atmosphere, effectively the club’s owners spending money to say ‘Listen guys, you really aren’t making enough noise’.

‘Leicester’s Thai owners give free clap banners out at every home game to supporters. It has helped generate a noisy, partisan atmosphere at the King Power Stadium,’ read one article after their introduction. Has there ever been a more ‘modern football’ paragraph? Any self-respecting supporter should be hot pink with shame.

Yet here’s the thing with those clappers; you can’t not use them. Like a party blower (there goes my school nickname again), elastic band and mobile phone, once you have a cardboard clapper to hand the urge to play with it cannot be resisted.

This whole sad mess reached a nadir when Leicester actually banned a section of their own supporters from using the clappers near the away fans because a few individuals had ‘misused’ them. They mean throwing them into the away section.

Still, even that had nothing on this Daily Mail headline: ‘Are cardboard clappers the secret behind Leicester’s success? Club have picked up almost 1.35 MORE points per game since introducing them to home fans in April’.

Screw you, Ranieri. Screw you Riyad Mahrez, N’Golo Kante, Jamie Vardy, Wes Morgan and Kasper Schmeichel. It wasn’t you that did it. It was the clappers.

Worst signing
It’s Ade Akinbiyi, and it’s so Ade Akinbiyi that I haven’t even bothered to look at any other players. Sure Trevor Benjamin was bad, Matt Jones was permanently injured and Bartosz Kapustka is currently MIA somewhere in the East Midlands, but nothing stops Akinbiyi taking his crown.

Being nice is nicer than being not nice, but there was a period in the 2000/01 Premier League season when Akinbiyi’s struggles became a source of national interest and amusement. His first goal, against Sunderland, sparked scenes of such jubilation amongst teammates, manager and media that the patronising element to it all was impossible miss. All for a player who cost £5.5m and was eventually shuffled out to Crystal Palace.

Worst kit
Technically cheating, but it’s this one. This very specific kit, as worn by a fan at Upton Park last season. If you need me to explain why that is awful, you’re well beyond help.

That’s the important stuff done. Now, how creepy is the mascot?

1) His eyes are so big that they haunt you when you seek solace, like the imprint of a bright light burnt onto your retinae. They are the eyes of an animal who has lost so many good foxes on the A46, taken out in the dead of night by the deadly purr of a Saab estate. They are the eyes of a fox bullied every day of his school life after that video of his mother going through bins in the park was handed around the classroom. They are the eyes of a fox whose relations were in the White Deer Park fox skulk, whose humiliation was documented in season two of The Animals of Farthing Wood.

2) This paragraph on the Leicester City official site:

That isn’t a joke.

Worst celebrity fan – Lembit Opik
Opik is not alone, but he is the most obvious poster boy for the rise of Member of Parliament as celebrity, for whom a high salary serving his constituents wasn’t just a career but a VIP pass to the world of showbusiness. Let me pause to retch.

Opik is a distinctly odd-looking man, like Wallace’s strange cousin but in a state of constant nervousness as if he has drowned Gromit in a canal and the crime is about to be discovered. Most galling is his wanton desire to be in front of a television camera, something that inevitably erodes away at self-respect. Opik is the man who appears on Have I Got News For You for ritual humiliation under the guise of being a jolly good sport, but the reality is that he just desperate to stay in the zeitgeist.

‘Oh, you’re being a bit harsh there,’ you might say. ‘What else has he been on?’ Stand Up for the Week, Al Murray’s Happy Hour, All Star Mr and Mrs, Celebrity Who Wants To Be A Millionaire?, Loose Women, Bargain Hunt Famous Finds, The Apprentice, Ant and Dec’s Saturday Night Takeaway, Come Dine With Me, Celebrity Juice and I’m a Celebrity…Get Me Out of Here!, is the non-exhaustive list. Then there was the appearance in a music video, promotion for wrestling and high-profile relationship with a Cheeky Girl.

Oh, and don’t forget the Daily Sport column, in which he criticised the UK media for portraying politicians as opportunists, presumably with a straight face. Must have been a different Lembit Opik who was then widely criticised for taking £23,083 out of public funds to spend on his second home, then. The claim for garden decking was rejected, however, and Opik did the awfully decent thing by repaying the £2,499 he wrongly claimed for a 42in plasma television.

Of course, no truly obnoxious celebritMP’s schtick would be complete without making a nauseating link between politics and their love of football. Another pause to retch:

“Politics and football have a lot in common. You need a cohesive team with a strong leader. The big competition tends to roll round every four years, too, even if it’s been 80-odd years of hurt since the Lib Dems won the big prize.”

Still, maybe I’m being harsh and Opik does hold a genuine love of Leicester City. Which is probably why he turned up to an interview with FourFourTwo with the club’s Wikipedia page printed out to assist him.

Greatest own goal
‘Sinclair does it again,’ read the BBC Sport headline in August 1999. When the BBC is taking the p*ss out of your record of scoring own goals, things have gone badly. And that was before they went all banterous.

Still, there is one Frank Sinclair own goal more famous than all others, the one so unexpected the television cameras missed it live because they were showing a replay of a foul in the opposition half.

Weirdest club shop item?
An easy one this, because Leicester’s online store has a range of ‘No Fuchs Given’ clothing, a brand established by Christian Fuchs that is a weird homage to those French Connection t-shirts emblazoned with witty slogans like ‘born to fcuk, ‘sexy as fcuk’ and ‘I may not be perfect but some parts of me are fcuking excellent’ and were worn by men who had not enjoyed loving human contact in over a decade.

At first I thought this was a charity thing, a risque slogan and branding used to sell items of clothing on the back of Leicester’s title win and raise money for a good cause. But it isn’t. Fuchs, already paid £50,000 a week, is hawking this stuff out on the club website. Is it just me that considers that a bit weird? Isn’t this a pithy hashtag with very big ideas of itself?

Anyone still unconvinced should bear in mind the following information:

1) The slogan itself is blazoned across each item of clothing AS A HASHTAG.

2) The following paragraphs have not been written by Nathan Barley or me in an attempt to be amusing, but are taken directly from the ‘About us’ section of the #NoFuchsGiven website:

‘#NoFuchsGiven is more than just a brand. It is a lifestyle choice. It’s the mentality of being brave and bold. Breaking away from society’s norms and ripping up the rulebook. A way to express yourself, where there is NoFuchsGiven.

‘Stand out from the crowd, be yourself! Be casual or elegant – always look cool. Be part of the #NoFuchsGiven community and tag us while wearing your tops. We will repost via @nofuchsgivenfashion.’

Because there truly is nothing quite like ‘breaking away from society’s norms and ripping up the rulebook’ by paying £25 to a rich sportsman for an overpriced t-shirt with a hashtag slogan.

NB – @Nofuchsgivenfashion doesn’t even exist as a Twitter user, which is the only positive thing I’m taking away from the whole business.