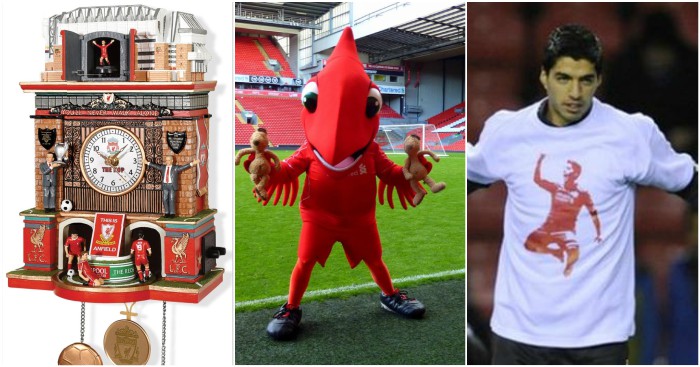 Worst thing that other fans think of them
Now here’s the thing. With every club in this series, I’ve just piled straight in. Yet with Liverpool, it feels necessary to offer caveats. They are a club with a rich history, a tremendous away support, a wonderful atmosphere (on occasions) and a really fine club anthem. They have had some fabulous players and iconic managers. Buttered up enough? Goooood.

That I even feel the need to include that paragraph, a vain attempt at self-preservation in what is a light-hearted feature, epitomises the typical accusation against Liverpool from rival supporters. Tarring an entire fanbase with the same brush is unfair, but there is a section of fans who, more than any other supporters, believe that Liverpool are indeed God’s own football club and any criticism must be met with swift anger. All clubs have this strain of fan, but for some reason they float closer to the surface at Liverpool.

It’s the memes of Bill Shankly looking down from heaven with a pithy quote. It’s the insistence that their managers and players have greater passion than at any other club because This Is Liverpool. It is the t-shirts with sugary motivational messages, the cuckoo clock that has apparently been made from the blood, tears, sweat and spirit of various former players, and yet you can imagine being displayed in Liverpool sitting rooms, chiming ‘Laa’ every 15 minutes.

It’s the shift from You’ll Never Walk Alone to #YNWA, a beautiful, emotive, spine-tingling song turned into a tattooed acronym. It’s the insistence that Liverpool FC is somehow more pure than the rest despite being owned by an American commodities broker. It’s the backing of a player found guilty of racist abuse and biting because he wears your shirt so he’s perfect, but oh no now he’s left let’s burn his shirt.

It’s the insistence that if Steven Gerrard breaks wind it is the most beautifully scented guff the world has been lucky enough to smell and that he is so committed to producing guffs in his local area that he definitely never ever wanted to produce them in west London. Yeah, that already weak analogy has fallen over like a website managed by ‘technical staff’ who are really starting to p*ss us off.

On the Liverpool official website, there is a songbook for sale. It is presumably a memento rather than something actually used by match-going supporters, but it is impossible to escape the religious symbolism. As ever with Liverpool, symbolism is pushed into your eyes, ears and brain. Look at this paragraph of spiel:

‘Anfield is a place of worship. And when it comes to inventing funny and inspirational songs for their team, no other set of fans can compare with the famous Kopites of Liverpool Football Club. The Anfield Songbook is a collection of the timeless anthems, traditional classics, player chants and witty one-liners that have made the Kop unique.’

That’s it, Liverpool fans. That paragraph there encapsulates why some football supporters think you are either tiresome, cringeworthy or both. So very many of you are wonderful, but at no other club does the militant minority place itself front and centre. Well, maybe at Arsenal.

Worst thing about the ground
Some of the views at the backs of the stands are horrendous, and ‘that special Kop atmosphere’ will leave any first-time spectator feeling flat unless they are attending a high-profile match or European night, but anything other than that would be pedantry. Anfield is still a wonderful place to watch football.

Worst signing
Dishonourable mentions for El Hadji “He’s a f**king loser” Diouf, Bruno ‘The next Zidane’ Cheyrou, Robbie ‘Boyhood club’ Keane and Alberto ‘Not even good enough to have a moniker’ Aquilani, but the award goes to Sean Dundee. Not particularly expensive – although £2m wasn’t small change in 1998 – but particularly crap.

In the words of Roy Evans: “One player I do regret signing was Sean Dundee, he was terrible on and off the pitch. He didn’t take any notice of me, did what he wanted and lacked discipline. He certainly shouldn’t have joined Liverpool.”

Worst kit
As if to compensate for an iconic home shirt that designers have usually struggled to cock up, Liverpool have had some truly horrendous away and third kits. From green to ginger to that weird mid-90s third shirt that had the badge reprinted across the front like a knock-off market copy, most have been terrible. And don’t forget ‘toxic thunder’. Never forget ‘toxic thunder’.

official website labelled it a ‘daring colour palette of Nightshade, Orange and White’ (honestly, what kind of c*** capitalises colours?), and it looks like a surfing wetsuit.

As if to somehow make matters worse, designers Warrior opted for a sleeve motif that was a constant reminder of the arm tattoo the guy who stole your ex-girlfriend had on his huge muscles. You still see him in the gym now, long after he treated her like shit and left her, lifting weights while you cough up a lung after five minutes on the cross trainer and vow never to smoke Richmonds again.

That’s the important stuff done. Now, how creepy is the mascot?
I don’t wish to pour the bad news on Liverpool, but you really do have the worst mascot in the Premier League. It’s called Mighty Red, which sounds like a native American from a 1950s Western movie, and it is a massive Liver Bird.

‘Liverpool have unveiled a new mascot – a life-size Liver Bird called ‘Mighty Red’ – in a bid to appeal to younger fans,’ the spiel in 2012 began.

Liverpool had never previously had a mascot, so that is the obvious excuse for choosing the most terrifying creature imaginable. It’s like Ian Brady and Ted Bundy were asked to pool their ideas and come up with something wacky, but stylish.

Honestly, look at him from the front on. He looks like a deranged half-shark, half-child-catcher figure that laughs at his own internal monologue while tying you up in rope before hammering in your skull. Somehow, the most scary part of the ensemble are the black eyebrows that allow for an even more menacing stare. Everyone involved must be forced to wear one of these t-shirts.

Mighty Red is also the subject of my favourite ever lines in tabloid journalism, in the Daily Mail’s story on the mascot’s creation:

‘The character, which made its first appearance at a children’s party on Sunday afternoon, is loosely based on the Liver Bird, a symbol of the city, and is seen on the club badge. While Mighty Red’s appearance – which is strikingly similar to Arsenal’s Gunnersaurus Rex – seemed to entertain the kids, some parents were not enamoured.’

‘Similar to Arsenal’s Gunnersaurus Rex’? Are you high?

Worst celebrity fan – Gary Barlow
Liverpool have that same annoying trope of A-list celebrity fans that all high-profile clubs share, with LeBron James, Brad Pitt, Angelina Jolie, Samuel L. Jackson and Dr Dre just a selection of those who boast their love for the club before being heard to mutter “Is it near Bucking-ham Palace?”

Robert Kilroy-Silk is also a fan, the man who somehow saw defecting from Labour to UKIP to the self-created Veritas party as an appropriate journey to success in politics. So too is John Bishop, the latest to take on the mantle as smooth-edged Saturday night family comedian from Peter Kay, while crucially missing the part where Kay at least produced some brilliant comedy before selling his soul for bums on seats.

Yet the winner has to be Gary Barlow, who combines delighting in his OBE and status as national treasure with urging the general public to donate generously to various needy causes. I’m still waiting for one of the presenters to drop the sickly sweet celebrity-frotting style of interview, turn to Barlow and ask him whether he thinks there would be fewer children in the UK affected by poverty if people didn’t avoid £20m in taxes solely to protect their personal wealth.

Greatest own goal
Come on. I’m sure there are plenty of perfectly good incidents of own goal incompetence, but nothing beats DJ Imi Traore against Burnley’s slow-motion spin of wonder. The best bit is the hapless left-back being bundled into the net in celebration, as if being made to endure what the ball just had to go through as his punishment.

That bastard got a Champions League winner’s medal less than five months later.

1) Brand and personalise everything, no matter how tacky it may seem. For those of you who consider me prone to hyperbole, I’ll just tell you that with a few clicks you can own a personalised Liverpool t-shirt, mug, pen, three types of water bottle, three types of mousemat, hip flask, cuff links, 13 types of keyring, phone cases, Zippo lighter, pendant, dog tag and innumerable framed photos.

Branded items number in the hundreds, and include everything from ladies’ underwear to otherwise smart leather briefcases. Imagine the embarrassment of turning up to that business meeting and being the only one without a football club-theme

d receptacle for holding your papers and files. Might as well resign on the spot.

2) Make products that refer to the glorious past, make sure they shine a little bit, ham up the symbolic importance of the item and then put a whacking great price tag on it.

Exhibit A in this strategy is the ‘small Shankly statue’, a sensational guilt trip of supporters to respect the club’s greatest manager. The official website tells visitors that the 22cm bronze-coloured resin statue (translation: cheap to make) is ‘a must for any LFC Fan Collection’ (that’s a lie, guys), and retails for a cool £150.

It’s as if Liverpool believe that supporters have an inability to hold thoughts or memories without constant visual reminders. How on earth will you remember the name of your club’s most famous manager unless you pay £150 for a little statue with his name on?

If you’re wondering why the statue carries Shankly’s name, it is to remind the owner that it is not a depiction of Beelzebub himself. Just look at that head, like an elongated John Cleese in the last throes of life crossed with the old boy from Third Rock from the Sun. £150.