Worst thing that other fans think of them
Manchester City are an oddity, in that that they remain generally liked despite enjoying recent success. Money typically brings jealousy and jealousy brings ire, but City have largely avoided the second part. A list of elite teams in order of the general preference of them winning the Premier League according to the ‘neutral’ is: Arsenal, Manchester City, Liverpool, Chelsea, Manchester United. We must probably now insert Tottenham towards the top of that list.

This lack of resentment stems partly from the fact that, to a generation, City will always be Manchester’s other club, and thus gain points for not being Manchester United. There is also an appreciation that City supporters have seen the rain over the last 30 years, and therefore cannot be reproached for enjoying the sunshine. They have a fairly likeable team and have had fairly inoffensive managers; the same is not true of many of their peers.

Yet there is another, more negative reason for this lack of hate: Indifference. To many, City are just a rich Everton, only with less history. As an experiment (and I’m using that word in the very loosest term) I asked three friends, all of whom support Championship clubs, to name me the current top six in the Premier League in no particular order. Manchester City were named fifth, fifth and sixth in turn. Is there something in that? I’m not a science guy.

Dig a little deeper – particularly in the earth around Old Trafford, unsurprisingly – and you can find criticism of City. Following years of moaning about their neighbours embrace of rampant capitalism and bought success, City followed suit. If you can’t beat ‘em, join ‘em.

Not only that, but City did it in style. Even before the arrival of Sheikh Mansour, this was a club who had Thaksin Shinawatra as owner, the Prime Minister of Thailand and notorious human rights abuser responsible for the deaths of thousands of civilians in state-sponsored, extrajudicial killings. It’s a line you struggle to insert into Blue Moon.

‘To support United is too easy,’ wrote journalist Paul Morley in 1998. ‘It’s convenience supporting. It makes life too easy. There is no challenge. It is a cowardly form of escapism, a sell-out to the forces of evil. United fans have no soul and will spend their eternity neck deep in boiling vomit.” That criticism is a lot easier to make before your team spunks £31m/£38m/£42m on Eliaquim Mangala.

Worst thing about the ground
Before we begin, the term ‘Emptihad’ is probably my least favourite word in modern football fandom. It is used by a certain type of moron, whose idiocy is by design rather than misfortune. The insinuation that seats left empty by exorbitant prices sold to a fanbase increasingly frozen out by the game they love are the fault of the fans themselves rather than the Premier League’s greed is just about the coldest hot take known to man.

Yet there is no doubt that (and partly due to the problem labelled above) the Etihad lacks atmosphere. There is a line on the Manchester City website that the stadium is a ‘place of worship’, but it doesn’t feel that way. Maine Road had soul, a visceral atmosphere in a ground that only ever felt like a home of football. The Etihad, proposed for an Olympics bid and built for a Commonwealth Games before being converted into a football stadium, doesn’t.

There is nothing wrong with the Etihad, you understand. It is a beautiful stadium with brilliant views of the pitch and the most outrageous ramps up to your seats that could give Mo Farah a stitch. But it lacks the primal roar of Maine Road, and for that it will be forever its lesser.

‘Manchester City are the gold standard in providing fans with the best matchday experience,’ the panel’s verdict read when awarding the Etihad as the best ground in the country in 2014. In that praise lies the damnation.

Worst signing
A massive shout out for Scott Sinclair, who I hadn’t just ‘forgotten that he played there’ as a manufactured expression of how bad he was, but a player who I had genuinely forgotten played for Manchester City. EDIT: HE WAS THERE UNTIL 2015. WHAT BLACK MAGIC IS THIS?

A nod in the direction of Jo, too, a club-record £19m signing at the age of 21 who scored one league goal, was loaned twice to Everton and once to Galatasaray before moving back to Internacional in Brazil on a free transfer.

Yet even that clusterf**k is outdone by Mangala, The One With The Transfer Fee Nobody Really Knows. It was first reported that City paid £31.8m for the central defender, but subsequently leaked that they were also liable to pay Doyen Sports and Danubio money for Mangala’s sporting rights, and thus paid a total price of £42m. That would make him the third most expensive defender in history.

Worst kit
Manchester City have had some rotten away kits in shades of orange, yellow, red and black, but it is the silver-grey number from 2000-02 that really sticks out. Le Coq Sportif managed to make several wretched shirts for City, but the mix of cheap look and highlighter yellow alternate trim on a silver shirt was the worst.

It looks like the type of shirt worn by a 50-year-old geography teacher who plays five-a-side for the first time in 14 years and breaks someone’s leg before issuing the defence of “Sorry, the body doesn’t work as quickly as the mind anymore.”

That’s the important stuff done. Now, how creepy is the mascot?
“So, the new mascot idea.”
“Ah yes, you said you’d had some ideas.”
“Let me ask you some questions. Firstly, what song do you associate with City?”
“Blue Moon, obviously.”
“And what lives on the moon?”
“Nothing.”
“What?”
“Nothing. N 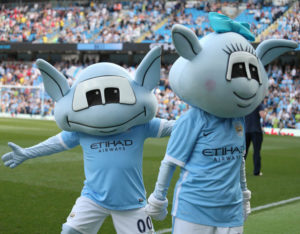 othing lives on the moon.”
“Aliens.”
“Aliens don’t live on the moon. We don’t know if other life exists at all but, even if it does, it isn’t on the moon.”
“Little alien fellas.”
“No. Simple organisms perhaps, as yet undiscovered. But not on the moon. Nothing on the moon.”
“Moonchester.”
“Sorry?”
“Moonchester. It’s like Manchester but with Moon.”
“Yeah, I got it. That was a rhetorical question, at least partially asked to indicate my astonishment at how bad the pun was.”
“So we’ve got Moonchester as one mascot.”
“Firstly, I haven’t agreed to that, you just said it and then carried on regardless. Secondly, saying ‘one mascot’ hints there will be another.”
“…Moonbeam.”
“See you later, yeah.”

Worst celebrity fan
Tough one, this. I’m tempted to go for comedian Simon Brodkin, the man behind the chav character Lee Nelson, who annoys me more than any other human alive in the United Kingdom. I know it probably makes me look horrifically out of touch and old (hey, at least I’m among friends) but I fail to see any discernible comedy in a faux-working class act by somebody who attended University College School in Hampstead and does celebrity pranks like a Sainsbury’s Basic Dennis Pennis.

But then there is Noel and Liam Gallagher, creators of era-defining music but with a constantly professed love of Citeh that now seems to extend to watching from a corporate box every second or third time they play in London. One of them will wear a replica shirt with ‘Gallagher’ on the back, so you know he’s serious.

But the winner has to be Ryanair chief Michael O’Leary, the man who saw train stations charging you 30p for a p*ss and, rather than seeing a ludicrous money-making scheme, envisaged a business model.

“It’s all about how far can you push it and I think you should keep pushing it,” O’Leary said when questioned about his treatment of customers as cattle. Yes Michael, it is. If you’re a c***.

Greatest own goal
As entire decades are reduced by time to fragments of assorted distant memories, our footballing educations become defined by several pillars. Some of these are historical moments, such as David Beckham’s free-kick against Greece, watching your team at Wembley or a particular goal from your first World Cup final. Others are less seismic, but equally memorable: Paul Alcock’s post-Di Canio wobble and fall, George Weah’s dribble, Roger Milla’s celebration or Robert Pires and Thierry Henry cocking up that penalty. To those of a certain age, Jamie Pollock’s own goal is one of those pillars.

It happened in 1998, towards the end of the football blooper VHS boom when the royal succession line read Baker-Hancock-McGrath-Tomlinson. Perhaps Pollock was even the poster boy as DVD killed the video star.

The key to any comedy is timing, and in April 1998 City needed to beat QPR or they would be relegated to the third tier. With the game level at 1-1, and the ball played forward, Pollock decided to take charge of the situation. What followed can only be described as ‘the reverse Paul Gascoigne vs Scotland’, City’s defensive midfielder looping the ball over a striker before heading beyond his own goalkeeper.

The introduction of danger into a previously serene situation is truly astounding, and the measure of any great own goal, but it is Pollock’s composure while doing something inexplicably mindless that holds the goal’s true magnificence. It is the own goal by which all others must be judged and against which all will ultimately fall short.

Weirdest club shop item?
Football’s progression into fashion is an intriguing subject. Having realised that selling football shirts to supporters to wear on match days and at airports when going on holiday still left a minimum of 310 days a year when branded clothes did not adorn their bodies, clubs noticed a gap in the market. Clubs generally produce some really nice training gear or tracksuits, City included, but the push into branded ‘fashionwear’ is bizarre.

Take this product, for example. Not a particularly attractive t-shirt in my opinion, though I’m hardly a man who should be giving out sartorial advice. But what I cannot fathom is why anyone would buy this product, even after its reduction from £30 to £20, to the extent that I’d love to hear from someone who owns it.

I understand why people pay more money for clothes with designer labels on them for reasons of vanity and pride rather than quality of fabric or workmanship; those are the pressures of a corporation-driven society. But why would you spend significantly more to own an otherwise normal t-shirt with a tiny Manchester City badge? Just wear the shirt if you’re that arsed, or buy a pin badge.

As an aside, I think Manchester City are the only Premier League club to have produced an official adult colouring book, priced at £10: ‘At home, or on the move, clear your mind, relax and colour your way through the world of MCFC.’

I have lots of things to say about adult colouring books and the rise in popularity of products that nobody wants until they’re told they need them, but for reasons of brevity they can be summed up in one word: No.