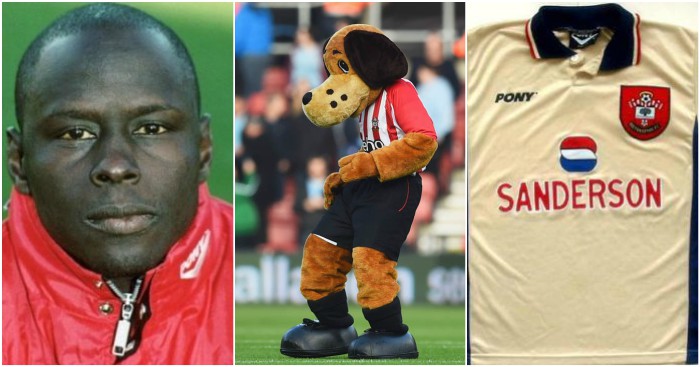 Worst thing that other fans think of them
Nothing. Just nothing. The only clubs that dislike Southampton are Portsmouth and Bournemouth for reasons of local rivalry (and the latter is a very mild antagonism) and some West Ham blogger for the Metro named ‘Blowing Bubbles’ who claims Southampton should be ‘hated’ by Hammers because Billy Sharp went down too easily in February 2014.

The notion that Southampton are the blueprint for every middling club to follow might be slightly grating, but it’s also true. This is a club who rebounded from financial ruin by doing things in he ‘right’ way, and have hardly looked back. They develop young players, sell on their best talent at a high price, reinvest appropriately and make brave decisions over managers. For that to cause irritation, you’d have to have an angry soul or be Martin Samuel. The two might be mutually inclusive.

My quest to find grievances with Southampton even took me to the darkest corners of the internet, and a Brighton and Hove Albion messageboard from 2005.

‘Why do I hate Southampton?’ bhaexpress asks rhetorically. ‘Is it the team, no. Is it their fans ? No ? Is it because they have a new stadium and we don’t ? Not that either.’

‘It’s because they are sponsered by a bunch of scum called Friends Provident ! I spent two hours getting to see them for an interview which was arranged a mere three hours before it was due to happen and then was kept waiting for an hour only to be told that they were ‘too busy’ to see me.’

‘It’ll cost them for my time and transport but after nearly thirty three years in IT I have never had that happen before.

‘What a bunch of wankers.’

Worst thing about the ground
Southampton have the same problem as Middlesbrough, Hull, Manchester City and Leicester before them in this section. The Dell was a wonderful stadium to visit, with stands that allowed you to get so close to the pitch that you could smell the gravy on Neil Shipperley’s breath. The ground kept the fervent atmosphere within rather than allowing it to dissipate into the sea air. The goal nets alone provided enough content for an hour-long episode of glorious 1990s nostalgia.

I understand that change must come. I know that The Dell needed so many improvements to make it adequate for 21st century football that a new stadium was the only answer. I know that the fault lies not with Southampton, but with the game itself. I know that – like the Riverside, KCOM, Etihad and King Power – St Mary’s is a smart, sensible stadium. But it just all leaves me so cold. St Mary’s is just another stadium that you can take out of the box, spray a certain colour and call home.

Worst signing
You might not have heard of this one, but in 1996 Graeme Souness signed a player named Ali Di…

Worst kit
I’m sorry Southampton fans, but I won’t take any argument on this. Made by Pony, the manufacturers apparently decided on this colour because it would look good when worn with jeans, forgetting two major things: 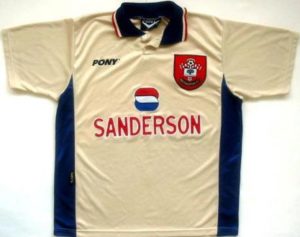 Officially called ‘ecru’, the colour is actually best described as ‘old school cricket whites’ before the England team decided that bright white was the way to go. It also stirs up horrible terrors of a time I spilt a mug of black coffee on an ex-girlfriend’s parents’ sofa in the early morning; it looked like I’d done a dirty protest at not being allowed to sleep in her bedroom.

That’s the important stuff done. Now, how creepy is the mascot?
I’ve got a 5,000-word essay on how the lack of imagination in football mascots are indicative of football’s embracing of corporate homogeneity, but it can basically be boiled down to Southampton’s mascot choices.

You’re called the Saints, guys. You could have had a guy in medieval robes and a massive halo called Saint Le Tiss, with gags about crosses and Juan Martyr ready to go. Instead, you decided upon an obese dog with socks rolled down like Steve Claridge and a permanent look of red wine hangover. What have dogs got to do with Southampton, for Christ’s sake?

Even when Southampton upgraded, it was only to turn one dog into two and improve the costume so the mascot didn’t look like a man who had saved up all his money for flights to a furry convention and run out of money.

And then there’s the names. Having imaginatively called their original mascot Sammy Saint, the club were tasked with choosing another moniker for the second of the litter. Sarah Saint? Sophie Saint? Steve Saint? Sol Saint? No, no, no and no.

‘Super Saint’. How half-arsed and hungover do you have to be to fail to think of two actual forenames beginning with ‘S’? How do you think it makes Sammy feel about his personality when a character with exactly the same appearance is called ‘Super’?

It’s going to take something special to persuade me that this is not the lowest of the Premier League low. I’m going to have to see something pretty spectacular to calm this anger, like the pair of them doing a synchronised dance to Gangnam Style or somethi…oh. As you were.

Worst celebrity fan – Christian O’Connell
O’Connell is guilty of that most heinous of radio DJ crimes: Saying sh*t for effect. In an interview with FourFourTwo in 2004, he managed to profess an undying love for Southampton and football while sounding like someone who had read a script of what a Normal Footy Bloke should say.

In one interview, O’Connell referred to St Marys as ‘the Friends Provident Stadium’, suggested giving out scratchcards to the captains as a wacky way of deciding the Premier League title (a clever banterous joke) and used lines like “it’ll be great to see what Chelsea, Liverpool and Man United can do this year” and “I want to see footballers sparking out photographers, falling out of nightclubs and shagging Page Three girls”. Sake…

Then in 2011, the self-professed diehard Southampton fan was asked to pick the club’s all-time XI for the same magazine. Not only did O’Connell pick Neil Ruddock in central defence and call Glenn Cockerill a hard nut (opinions, opinions), but also says Francis Benali “has a curry house 500 yards from the Den”. It’s The Dell, fella.

Greatest own goal
Gone deep into the archives for this one, but I do enjoy this Ivan Golac finish against Leeds United from 1978, if only because I can imagine him saying “no no, don’t trouble yourself,” to the striker. “This is a difficult and exact finish, and you don’t want to f**k it up. Let me help you.” Impudence is rarely a good thing in your own penalty area.

Weirdest club shop item?
I’ve got over the initial shock of discovering football club-branded adult toothbrushes are a thing, but let me ask you a question: Where do you keep your toothbrush? Obviously I’m not interested in electric ones that have their own stand, but the normal manual job.

The reason I ask is because I keep mine in a pot on the sink, but a line on Southampton’s website has made me question my entire being: ‘Also included in the pack is a head cover case and magnet, making it easy to attach it to the wall for easy use and storage.’

I have questions: Is this a thing? Don’t people use little pots in the south? Why is keeping the toothpaste on the wall ‘easier storage’ than a pot anyway? Are house prices so high and rooms so small that you store things on the wall? Is everything magnetised south of the Watford Gap? And what about the toothpaste? Because if you still need a pot for that then the whole thing is flawed.

Elsewhere, there is little truly bizarre on offer, although I do love that one of the only two items not available for home delivery is the plastic wastepaper bin, because some poor sap has spent an afternoon trying to wrap one of those bastards and taken the nuclear option. “No, I won’t calm down Sandra. I’m not doing it. These pr*cks can pick them up themselves if they care that much about collecting refuse in a Southampton-themed receptacle. I’m not having it any more.”

Anyway, I didn’t go any further in case the person manning the Southampton website’s Google Analytics page spotted a user on the plastic bin, wooden golf tees and 50p photo of Florin Gardos pages and suspected someone was planning to hold a ritual pyre.