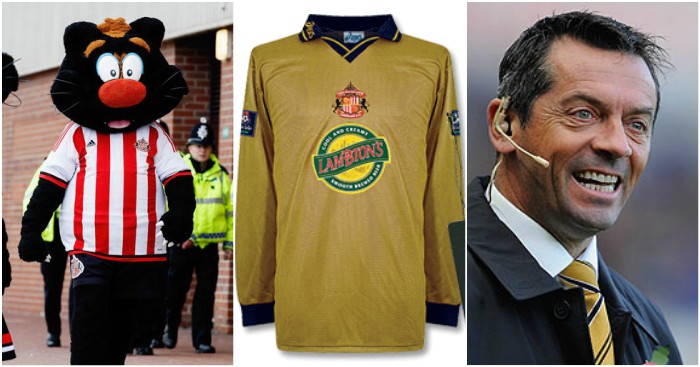 Worst thing that other fans think of them
Until the last few months, the majority negative view of Sunderland was as a club clogging up the Premier League, and thus deserving of either scorn or relegation. Their nine points totals between promotion in 2007 and the start of this season all lay between 36 and 47 points, and they had flat-lined over the last three years: 39, 38, 38.

Sunderland’s other trick over the last half-decade has been recruiting players who look like they barely give a toss about the club’s fate, at least until the last two months of the season, which hardly makes them attractive to the neutral. If that’s a direct result of a sacking culture in which managers are asked to clear their desk on a yearly basis, the club is tarred by that brush too. Sunderland is the natural home of the Manchester United cast-off, supporters expected to pay up to watch a team aim for mediocrity and fall several furlongs short.

Yet the cherry on top of this foul-tasting cake is the manner in which Sunderland have mismanaged their decline without appreciating the commitment made by supporters and staff, those who have truly felt the five years of decline. So you have a round of redundancies of the lowest-paid staff a week after funding a first-team holiday to New York. And you have a manager agreeing to kick the ball out to pay tribute to an opposing captain in front of away fans who have made the 550-mile round trip to watch their team’s final match in the Premier League.

This astounding mismanagement reached a nadir during Adam Johnson’s case, when he was accused of sexual activity with a child. Rather than suspending Johnson, Sunderland continued to let him play, earning over £2m in wages. It was later revealed that the club had been privately told that Johnson had kissed and sent explicit messages to a 15-year-old girl, but continued to let him play, sending out a message of results over decency. Those actions will linger long in the minds of many supporters, especially after it turned out that Margaret Byrne, the chief executive who resigned over the handling of the affair, was paid £750,000 to sign a confidentiality agreement. There are many clubs in the country who do not deserve their loyal supporters, but none more so than Sunderland.

Worst thing about the ground
It’s just a bloody long way to go to find a ground without much character, a stand that is unfathomably cold for five months of the season and a city without the offerings of Newcastle. Sorry…

Worst signing
Tempted to pick one or all of David Moyes’ band of former brothers from this season. In Sunderland’s current squad are seven players recruited in the last ten months having previously played under Moyes: Victor Anichebe, Joleon Lescott, Bryan Oviedo, Steven Pienaar, Donald Love, Paddy McNair and Darron Gibson. None of those seven made Sunderland’s top 13 appearance makers in the league. Who needs scouting, eh?

The worst must surely be Lescott, signed in January at the age of 34 after leaving AEK Athens in November. “Joleon’s had a massive impact on the dressing room because he’s a leader, a really good organiser when he’s on the pitch,” Moyes said in February, with award-winning optimism. “He’s an experienced player, he knows a lot of them as well and he’s had a big impact on the dressing room.”

At that point, Lescott had played 33 league minutes for Sunderland. He would manage only 90 more, on the final day at Chelsea when Sunderland lost 5-1 and Lescott set up one of the goals in an inadvertent header over goalkeeper Jordan Pickford. Massive impact.

Still, even Lescott is pipped to this award by Jozy Altidore, one of those Premier League strikers who gained a cult following through being sodding awful. Sunderland watched Altidore score one goal in 28 Premier League games for Hull City and still were somehow blinded by his Eredivisie record. They paid more than £6m for a striker who played 42 league games and scored once.

Worst kit
Sunderland’s home kit is pretty hard to cock up. The red-and-white stripes are iconic and aesthetically pleasing. Avoid a horrific sponsor and a designer intent on unnecessary faffing, and you have a winner.

That means you can focus on the away kit, and concentrate on not making a kit that is a lurid colour, with the logo moved into the centre, the kit manufacturer logo pushed onto the collar as if somebody’s hand slipped on the mouse when designing it on a computer and with the words ‘Cool and creamy’ written on the front. Sunderland ticked every hideous box.

It is the colour that is the most offensive on Sunderland’s 1997/98 away shirt, best described as ‘sweaty gold’. It looks like you would come out in an itchy chest rash just by looking at it, and endure a thousand static shocks from every hour spent wearing it. If that wasn’t enough, they lost the play-off final after *that* penalty shoot-out while wearing it.

That’s the important stuff done. Now, how creepy is the mascot?
You can’t doubt the logic. When Sunderland surveyed supporters for a new club nickname in 1997, they must have rejoiced when the name ‘Black Cats’ was chosen. You try finding a ‘Rokerite’ fancy dress costume at late notice. 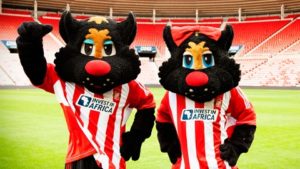 That said, there are a couple of faults to pick up on here. The first is that the two cats used to look very odd indeed. They had devil ears rather than the normal pointy numbers, a ginger palm tree between their eyes, another ginger star on the top of their heads and a lack of whiskers, as if they had been torn off in a fight by some bins down an alley. The white spots around the mouth, from which the whiskers should protrude, looked like fangs from afar. My theory is that the number of ex-Manchester United players at the Stadium of Light caused an evolutionary leap to the dark side. As you can see in the header image, necessary improvements have now been made.

And then there are the names. Rather than Quinny and Phillips – one tall and one short cat, of course – Sunderland opted for Samson and Delilah for reasons my meagre research has not uncovered. Quite why you would name your mascots after characters from a bible story in which one lost his great strength having been betrayed by the other in return for money is unclear, but I’m assuming it’s got something to do with selling Patrick van Aanholt halfway through a relegation season.

(EDIT: Apparently the mascots are named in reference to a beer advertisement from the 1980s from Vaux brewery, who used to sponsor Sunderland. I’m not sure if that makes it more or less weird.)

Worst celebrity fan – Phil Brown
I can’t write the many hundreds of words I would like to about Brown here, so let’s let him provide the rope:

“If that’s foreign strength or that’s English strength, it doesn’t matter to me” – Nope, no idea what these mean.

“Walked across there [the Humber Bridge] yesterday. We saved a girl actually. Considering her future, shall we say, but that’s one for the headlines isn’t it, I suppose? You never know do you until you see her jump, you don’t know whether somebody is actually going to. She was claiming she was 40 plus, but she looked a lot younger than 40 plus. She tootled off to wherever she came from” – The Humber Bridge Board subsequently said that they had heard nothing about anyone on the bridge looking to jump, and no Hull player would corroborate the incident. When the Observer asked Brown if the story was a figment of his imagination, the reply was brief: “No comment.”

Greatest own goal
The correct answer here is Santiago Vergini’s wonderful volley against Southampton, but it is important to dwell momentarily on the fact that Sunderland once scored three own goals in seven minutes against Charlton in 2003 when managed by Howard Wilkinson. That’s enough to break your footballing soul in two.

Weirdest club shop item
Perhaps it is because I visited after the end of the season, but Sunderland’s online store appears to be very broken indeed. It’s like strolling into Primark because you have forgotten to pack two pairs of socks for Leeds and inadvertently walking into the first day of the sale.

The first obvious thing to notice is that there is no leisurewear available for women, which is a sodding great hole on the website of a Premier League club. Are we to believe that all the stock has been bought for an attempt to create a Sunderland-branded Michelin woman? Or merely that the online store is as buggered as every other part of this club?

The only two exceptions to this are a pair of girls’ Ugg-style boots, and a lip balm advertised as ‘strawberry’ flavour. It’s as this point that you wonder if the whole thing is a giant cry for help.

Still, my favourite item of the sparse fare that is on offer is the SAFC snuggle fleece, which ‘provides an extra layer of warmth for all junior black cats’. The first point of interest are the instructions, which say ‘this item is only to be used whilst seated’. That is demonstrated by a child showing off the fleece while standing up, and at least hints at a flawed design.

But it’s that photo that intrigues most, because I’m not sure that a) the child’s head hasn’t been photoshopped in, and b) that those are his hands. They look plastic and creepy, like Andrew Lloyd Webber.