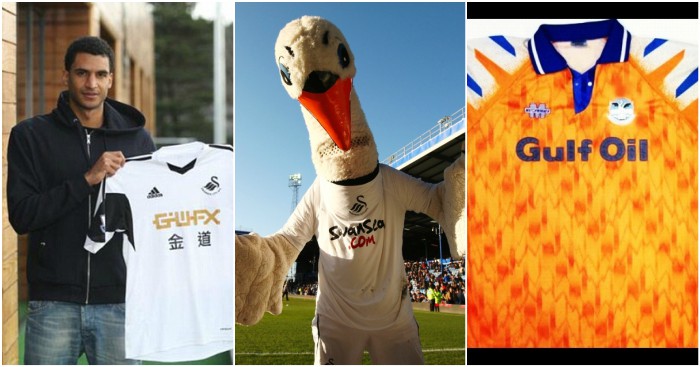 Worst thing that other fans think of them
If this piece had been written in 2015, there would simply be no material. Swansea City were held up as the blueprint for all other Premier League clubs to follow, successful enough to draw admiration but crucially not big enough for jealousy to warp into bitterness. The anti-England chants from supporters might have put out a few of the most patriotic Premier League fans, but the rest saw it as harmless – and predictable – fun.

Since then, chairman Huw Jenkins has done his very best to erode away that positivity, alienating the club’s supporters’ trust, selling the club for a quick buck at the first chance he got and overseeing a period of pretty abject recruitment. The sale of shares to US investors Jason Levien and Steve Kaplan without the consultation that was not obligatory but certainly recommended was a poor decision. Add in the sale of Ashley Williams and Andre Ayew and the new contract given to Francesco Guidolin plus failed appointment of Bob Bradley, and Jenkins’ goodwill is in negative equity.

That has shifted Swansea’s reputation in the eyes of the masses from feelgood club to just another middling Premier League team, as uncharitable as that may sound. Given the reaction to Marco Silva’s appointment, there were plenty of neutrals hoping that it was Swansea rather than Hull who were relegated this season. Two years ago, that would have been unthinkable.

Worst thing about the ground
I mean there’s no easy way of saying this: the Liberty Stadium is in a retail park. Not near a retail park or within spitting distance of a retail park, but in a retail park. It is not surrounded by quaint pubs and terraced housing that have decades of football soaked into their fixtures and furnishings, but Argos, New Look, Currys PC World and that great bastardisation of English cuisine, Harvester. There is a KFC and Pizza Hut for supporters with the constitution for a continental diet.

Despite the usual dose of cynicism, the Liberty Stadium is a fine ground once you get inside. There are no gaps in the corners between the stands to let the atmosphere dissipate, and I’ve rarely been served quicker for half-time refreshments in an away end. Add to that the novelty value in travelling to a different country to watch your team play an away league game, and the Liberty Stadium is a pretty good day out.

Worst kit
Swansea City’s home kit has rarely gone wrong, with plain white and black trim the easiest colours to nail. Add in Adidas (1970s) and Hummel (1980s) as sponsors, and Swansea supporters have been spoilt down the years. 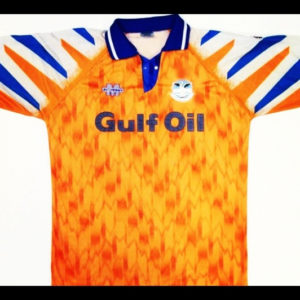 Yet in the early 1990s, small kit designer Matchwinner gained a reputation as the go to guys for clubs who wanted to release the shackles of English football’s 1980s with a truly abysmal away shirt. The idea was that gawdy away kits would sell better than plain designs (people could buy the home shirt if they favoured the traditional), and that did hold some weight, but there are limits. Matchwinner’s selection for Swansea was amongst the worst.

If the blue and white (Cardiff City?) chevrons on the arms were not bold enough, the colour of the kit was a messy orange that had patches of darker hue and a faint zigzag across the front that gave the ensemble the look of a shirt that had been soaked in a puddle of melted Calippo juice. Plastering the sponsor ‘Gulf Oil’ on the front in a word processor font only made things worse.

That’s the important stuff done. Now, how creepy is the mascot?
I’m not saying that the city of Swansea was named purely in order to make future mascot selection easier, but it sounds a great deal more plausible than a derivation of the Norse term for ‘Sveinn’s island’ or the Norse words ‘Sweyn’ and ‘ey’, meaning inlet. You must take me for a fool, Wikipedia.

Cyril the Swan is probably the most infamous mascot in the Premier League, an animal who uses his ownership by the queen as a carte blanche to wreak carnage across the country like a feathered Prince Harry. While his water-dwelling cousins use their ability break your arm as a latent threat, Cyril is here to tell you that this gander don’t give a f**k and advise you not to f**k with him. Actually.

Removing the head of a rival and drop-kicking it across the pitch was followed by a Football Association charge of bringing the game into disrepute after kicking the ball into the face of an opposition player. The negative publicity only made Cyril more popular, voted Best Mascot by readers of Match of the Day magazine. It was like Luis Suarez being named Player of the Year, but with more fur and far less racism.

It wasn’t until Cyril married Cybil on the pitch at the Vetch Field in 2005 that a wildcygnet had his wings clipped, but the mischief lives on in those eyes and – bizarrely – eyebrows. The advice will forever remain the same: Do not f**k with the Swans.

Worst celebrity fan
The only two bona fide celebrity Swansea City supporters the internet gives me are Michael Sheen and Catherine Zeta-Jones, and one of those played Brian Clough in a film so you can sod off if you think he’s getting grief. The only Catherine Zeta-Jones anecdote I have is that I continuously confuse her with Rachel Weisz, which makes me feel funny things about one scene in Enemy at the Gates. It reflects worse on me than her, really.

A classic of the genre enriched by great commentary from Hugh Johns.#Swans #BristolCity #Crap90sFootball pic.twitter.com/1adix3FSCN

Weirdest club shop item
Never doubt Swansea City’s commitment to having an animal as part of their club name, for there is no other club that goes so deep into the branding of tat as them. If you thought the Cyril the Swan travel neck cushion was impressive, that’s only because you haven’t met the Swansea City Mum’s Latte Set, Swansea City oven gloves, Swansea City wall-mounted key holder, Swansea City tattoo set and Swansea Liberty Stadium Air Freshener. It is as if people in Swansea don’t trust anything without their club logo emblazoned upon them, like a South Walian Kitemark.

The pièce de résistance is the Swansea City musical egg timer, which plays ‘Take me to the Vetch Field’ once time has been reached. Has everyone lost their f**king minds?