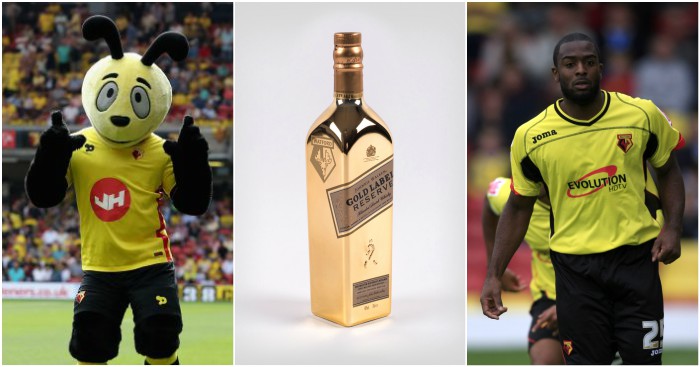 Worst thing that other fans think of them
While there is nothing truly unlikable about Watford, a middling family club enjoying their time in the sun, the ownership by the Pozzo family has undoubtedly left a sour taste in the mouths of other football supporters. The family’s tenure has been a categorical success, but at a moral cost.

Then you have the individually distasteful stories such as Peñaranda, signed for £7m, loaned out to Granada and Udinese (the Pozzo clubs, although Granada have now been sold) and now unable to get a work permit. And Odion Ighalo, originally loaned from Udinese and then released by them only to join Watford the very next day (and thus avoiding a transfer fee?).

There were also questions asked about conflicts of interest and agents after many of the players signed during the summer after promotion to the Premier League were registered as acting without a representative, while Watford employed the services of an agent to broker deals. When Etienne Capoue signed from Tottenham, Mino Raiola had previously described himself as Capoue’s agent but he was listed as having no representation when signing. Raiola actually acted as Watford’s agent in that transfer deal.

There is no accusations that Watford have done anything illegal, but it hardly marks them out as neutrals’ favourites. The appointment of Marco Silva is a terrific coup, but he oversees a squad of transient footballers, a collection of average foreign players and a distinct lack of young, domestic talent. It would be lovely if Dion Pereira, Andrew Eleftheriou, Michael Folivi or Brandon Mason could break through next season, but you’ll forgive me for doubting it.

Worst thing about the ground
I don’t want to pick on Vicarage Road. In a world of homogenous stadia in homogenous areas of increasingly homogenous towns, there’s something to be cherished in the slightly pokey and jaded. It’s in the town centre, and nowadays that’s good enough for me.

Worst signing
Despite all of the aforementioned discussion over the Pozzo’s transfer dealings, it is a pre-Pozzo signing who surely constitutes the worst value for money in Watford’s history. In August 2007, they paid a club-record fee of £3.25m (plus a million in potential add-ons) for Nathan ‘The Duke’ Ellington.

When you read sentences on Wikipedia like ‘Ellington initially found it difficult to command a place in the Watford starting XI due to the excellent form of Darius Henderson and Marlon King’, you know things have gone badly. In total he played 51 league games, scored five goals, was loaned to Skoda Xanthi, Derby – where he was kept out of the team by Rob Hulse – and Preston and eventually joined Ipswich on a free transfer.

Worst kit
The standard practice here is for me to pick a kit, explain why I think it is disgusting and then have many different people tell me why it is the greatest away kit their club has ever produced. I have a theory that the most hideous kits stick in the mind and therefore become increasingly cherished over time.

However, surely we can all agree that this is a hideous shirt, to such an extent that even the manufacturer looks back on it with an air of vague apology. The white blurred effect behind stripes and a dark background make it look like an accidentally taken photo when running down a busy road at night.

That’s the important stuff done. Now, how creepy is the mascot?
I am aware of the boldness of the claim, but I’m touting Harry the Hornet as the greatest mascot in the Premier League. Oh don’t worry, I have my reasons:

1) This picture of HH celebrating in perfect harmony with Odion Ighalo, like football had momentarily created a children’s TV version of itself.

2) This sentence from his own Wikipedia page, in which his change of design is discussed:

‘The main reason for the first change was a dispute between the club and the man who worked inside the suit, which resulted in him retaining Harry’s head and so a redesign became necessary.’

3) Getting married on the pitch to Harriet the Hornet, a ceremony for which the club asked supporters to arrive at the ground half an hour before kick off and asked them to sing specific songs both before and after the service. Also for provoking the sentence ‘witnessed by Wolfie, the Wolves mascot, who acted as Harry’s best man’.

4) All the above might have been enough, but last season Harry mocked Wilfried Zaha for falling to the floor too easily, and genuinely became embroiled in a controversy.

“The mascot is out of order, isn’t he?,” said Crystal Palace manager Sam Allardyce, apparently unaware of the ridiculousness of what he was saying. “If someone is diving, they don’t get that angry. There’s contact. It wasn’t given. It’s up to Watford to sort that out, really. The Premier League and FA can look at that and do what they want to do.”

As a result, Harry was reminded by the Football Association of his responsibilities. I only hope he gave them a confused look and mumbled something about maintaining the nest and servicing the queen.

Worst celebrity fan
I like Elton John. I’m sure he has his moments of diva-fuelled meltdown, but the songs are catchy. Other than having to listen to Daniel exclusively when I am alone so as not to invite accusations of rampant solipsism, Elton is fine by me. Plus he’s less of a celebrity fan and more of a celebrity ex-owner, which is its own category entirely.

I’m also not having the bulls**t that Jennifer Aniston or Mila Kunis are fans just because someone once gave them a shirt in an interview and they said “Gee thanks, Waahhht-forrrrd” in an awkward American accent. Tell me how many league goals Gifton Noel-Williams scored and we’ll talk.

Instead, it would be appropriate for Tim Lovejoy to be the only person in the series to be nominated twice in this category. You may remember that the then-Soccer AM presenter was a Watford supporter before he decided on a whim that Chelsea were the club for him.

‘I was once dragged onto Soccer AM by some mates,’ begins the story in the online comments section beneath Taylor Parkes’ famous review of Lovejoy on Football. ‘We were ‘fans of the week’, and apparently we were only going on to wind Lovejoy up.

‘In the bar after the show, one of our group approached Lovejoy and asked him at what point he had switched allegiance from Watford (who he apparently used to support) to Chelsea. His reply, and I quote, was delightful: “Shut the f**k up, you c**t.” As arrogant and self-delusional a man as I’ve ever met in my life.’

Lovejoy remains the absolute pits, the walking, talking epitome of LAD culture dressed up in a £70 haircut and soaked in eau de smugness. Watford should commemorate the day he ‘left’ for Chelsea as one of their greatest moments.

Weirdest club shop item
It’s getting harder and harder to find oddities as we get to the end of the Premier League’s alphabetical pile. Four months ago the idea of a Watford-branded Hi Viz vest would have amused and delighted me in equal measure. Now I’m just left sobbing at football’s rampant corporate creep when I spot a £9 ‘Americano mug’ or £50 rubber and steel bracelet, also wondering if football clubs compete against each other to create the ugliest branded items and then laugh at those people who buy them.

And then I see Watford selling a bottle of Johnnie Walker gold label (RRP £42) for £104.60 with delivery because it has one club logo plastered onto the side of the bottle, and read in the product description the advice to mix it with apple juice and soda water. Oh yes, football clubs can still do weird alright.