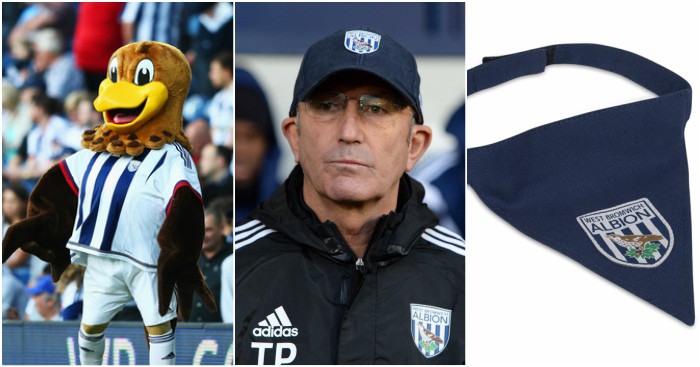 Worst thing that other fans think of them
You can’t hate West Bromwich Albion unless you are a Wolverhampton Wanderers or Aston Villa supporter, because they simply aren’t that sort of club. Hating West Brom is reserved for the kind of people that get angry enough to write into a newspaper about a programme on television they think is in poor taste without appreciating that they could just turn it off and talk to their loved ones.

In fact, any serious bitterness for West Brom can be intrinsically linked to having Tony Pulis as a manager, and therefore the Pulimosity that comes with it. Wherever he goes, distaste will follow. That’s thanks to his playing style, fetish for collecting central defenders and defensive midfielders as if they were Panini stickers and his general persona that sits somewhere between gruff and “the whole world is a conspiracy against Tony Pulis”.

The problem is that every club that Pulis manages becomes intrinsically linked to their manager until they are one and the same, weaved together in imperfect harmony. To the neutral, West Brom are now the most unglamorous Premier League staple of all, one who rarely gives young players or academy graduates a chance and who gives up when relegation survival is confirmed. These are hardly attractive features.

Worst thing about the ground
Can I do the sea level fact? No? Okay then.

The Hawthorns is a decent enough ground, if pretty small for a stable Premier League club. A capacity of under 27,000 means that away capacity is limited for the bigger clubs, but the bigger issue is one of location. There’s no doubt that The Hawthorns is perfectly placed for transport links, but finding a pub allowing away fans within 10-15 minutes’ walk is difficult, and the club-hosted ‘fan zone’ has twice refused to let away supporters in at matches I have attended. Still, these are trifling matters in the greater scheme of things, and West Brom may well be the first Premier League ground to trial safe standing, which would be nice.

Worst signing
Tempted to pick Brown Ideye on the basis that he was an expensive failure or Nicolas Anelka on account of him being an utter liability, but one was sold for a decent fee and the other cost nothing, so both can breathe huge sighs of relief.

Instead the dishonour goes to Luke Moore. When one of your closest rivals is prepared to sell you one of their young players, look that gift horse right in the mouth and ask why. West Brom actually loaned Moore for the final months of the 2007/08 season, saw him score precisely no goals and then promptly signed him for £3.5m. Moore scored his first goal for West Brom 11 months after his debut and less than two years later he was left out of their Premier League squad entirely. He eventually joined Swansea City on a free transfer, and was last seen – aged 31 – training with Lillestrom after his contract at Toronto FC expired.

Worst kit launch
Regular readers will see the tweak to this category, but with good reason. In 2015, West Brom released their kit with a Youtube video so appalling you almost suspect it might have been deliberate.

The joke was that Gareth McAuley was mistakenly sent off in the previous season during a game against Manchester City when Craig Dawson should have gone, so the club played that footage before some social media intern issues the punchline “something you will be able to recognise”.

Well yes, but that wasn’t the issue, was it guys? The problem wasn’t that Neil Swarbrick couldn’t tell which players played for West Brom and which for Manchester City, but that he mistook two players for each other. Unless each player’s kit was going to be slightly different (and they weren’t), the problem hasn’t been eradicated at all, just changed.

Explained jokes are the best jokes.

That’s the important stuff done. Now, how creepy is the mascot?
Really creepy. ‘Baggie Bird’ is a throstle, or thrush to you and I, but after a recent re-brand looks more like a demented chicken, as if it has been hitting the creatine hard in a bid to wring the neck of the next fox that dares enter its coop.

There is nothing quite as threatening as a perma-grin plastered onto a perfectly symmetrical face, the type of manic smile that steadfastly remains while you tell Baggie that his dog has had to be put down after complications during surgery or that it would be best if he went into a home for throstles addicted to muscle gain. You can imagine a single tear rolling down his face feathers and dripping off the end of that gurning grin when Baggie finally has a moment of clarity.

Fair play to West Brom for the realism, however, because they’ve even bulked Baggie up to make him top heavy and given his eyes the look of that man at the gym who lifts the big weights while topless but has a look in his eyes which conveys that he has had half the number of thoughts of anyone else present.

I also have to say that the more I look at this photo of Baggie, the more it reminds me of Sam Allardyce doing one of his wide smiles when mocking an opposition player for going to ground too easily. It’s probably just me – it’s been a long series.

Top tip: If someone can present the One Show without changing his schtick from the football presenting, he probably wasn’t fit for the latter gig. We already had Gary Lineker within that field and he’s a) brilliant at it, b) a former England great who can add insight and c) naturally amusing rather than it being painfully forced.

The problem with Chiles is that every time the camera turned to him, it seemed as if he had spent the last 30 seconds not listening to his guests speak but working on a laboured pun. The job of a good presenter is to ignite analysis and discussion between the panel, not use the material your family have banned you from using at the dinner table.

Chiles’ TV lows – at least in a football sense – came when he made a joke about Polish fans being builders (“I’m trying to get some building work done at the moment, quite seriously”) and during the lengthy delay to England’s World Cup warm-up match against Honduras in 2014. If such times of uncertainty are when reputations are built, Chiles crumbled and was left with nothing to offer, uttering the immortal line of England fans: “They’re just sitting there, just sitting there and sitting there.”

Weirdest club shop item
Just when you think that club shops will run out of ways to surprise you as you reach the end of your alphabetical journey, West Brom pull out all of the stops:

1) It’s an ice cube tray, but not just any ice cub tray. Because this is an ice cube tray that costs £11.98 with standard delivery, just because it enables you to make ice cubes with ‘WBA’ written on them in barely legible ice writing. I honestly think we’ve jumped the shark in terms of the ‘everyday household item with vague and meaningless reference to football’ market.

2) There it is, just sitting on the West Brom website like it’s the most normal thing in the world, rather than a completely random pairing of nouns. ‘Dog bandana’. Dog bandana. Shrubbery peel. Artichoke speaker. Gum iron. Trumpet daisy. Block stapler. Wallet pony. Might as well sell them all.

3) If writing this series has done one thing, it’s making me really confused – and weirdly impressed – at what people will spend £11.98 (including delivery) on just because it says the name of their club on it. F**king clothes pegs.

Finally, although it isn’t available in the club shop, can I also just say that this is too much? Thank you.