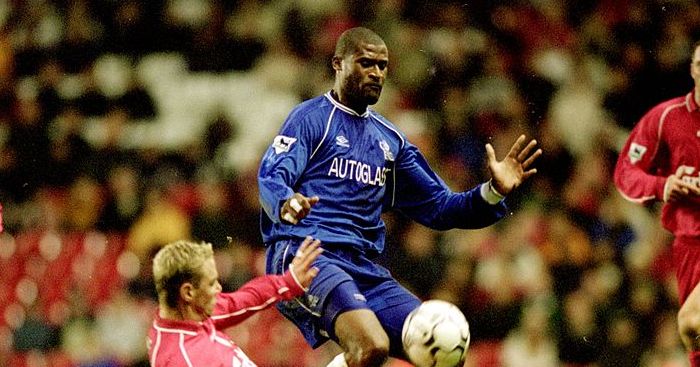 Ali Dia was our first inductee. Now for an acceptance speech from Winston Bogarde…

There is a sort of morbid fascination with the third-choice goalkeeper. An entire genre of football media is dedicated to the subject, from in-depth interviews with those asked to fulfil the role to the peculiar glorification of a player designed specifically not to play.

Stuart Taylor. Nick Culkin. Richard Wright. Ross Turnbull. Even at international level, the third in line to the throne between the posts retains a certain charm and provokes an obvious intrigue. It is a task as selfless – with a responsibility to help improve others and maintain both high standards and morale – as it is thankless.

And the coverage is almost never negative. They are depicted not as figures of fun or ridicule but as honest, hardworking athletes, paragons of sporting virtue, consummate professionals. Rob Green has spoken brilliantly and eloquently about how “tough” and “demanding” it can be, how it requires a greater level of resolve, humility and motivation than any other position.

If goalkeeping is the loneliest job in football, those who play have the solace of a weekly opportunity to become the unlikely hero. Those who were never intended to play are still expected to train, to travel, to toil with no tangible reward. But at least they are not vilified, denigrated, belittled and destined to forever define the financial wastage of the modern game.

Sir Bobby Robson was looking for a new centre-half in the summer of 2000. Newcastle had just finished mid-table in the Premier League and were in need of defensive reinforcement. Nikos Dabizas had been tried in partnerships with Aaron Hughes, Alain Goma, Marcelino, Hélder, Steve Howey and Franck Dumas, with none engendering any sort of confidence.

The availability of Winston Bogarde, therefore, piqued Robson’s interest. Barcelona had decided to cancel the remaining year of the Dutchman’s contract due to injuries, and at 29, he still had plenty to offer.

Bogarde had not managed to make Holland’s European Championship squad that year but was expected to start the World Cup semi-final against Brazil two years prior in France before suffering a broken ankle in training. His previous experience in England was brief but perhaps telling: he started in Barcelona’s 3-1 Champions League defeat to Chelsea in April 2000 – supposedly targeted as a weakness – and played every game at Euro 96, including a chastening 4-1 defeat to the hosts.

He was far from the least courageous of the Dutch that evening at Wembley. Danny Blind conceded the opening penalty and Aron Winter was at fault for Teddy Sheringham’s first and Alan Shearer’s second goals. But Bogarde could be seen forlornly sliding in behind the former after Edwin van der Sar had spilled Darren Anderton’s tame effort on the hour. The humiliation was complete.

Few realised then but Porto manager Robson had been in informal talks with Barcelona over becoming their manager that May. He was director of football at the Nou Camp when Bogarde joined in January 1998. Chelsea stopped him repeating that fateful mistake.

The Blues were a different club back then, still in the relatively early stages of their continental drift. Gianluca Vialli was manager, Gianfranco Zola was lynchpin and Jimmy Floyd Hasselbaink and Eidur Gudjohnsen – fire and ice – had joined. But debts of close to £100m had shone a familiarly uncomfortable economic spotlight on the ownership of Ken Bates. They could hardly afford to waste more money.

The great irony is that one of football’s most infamous financial drains was initially designed as a cost-cutting measure. When Chelsea beat Newcastle to Bogarde in August 2000 by doubling their offer of wages, they had captured the seemingly ideal replacement for Emerson Thome, bound for Sunderland in a £4.5m deal completed that same day.

‘[Thome] joined for £2.5 million just 8 months ago,’ read a statement on the official Chelsea website, ‘so a £2 million pound profit in such a short period of time has to be seen as good business.’ Signing Bogarde, the Eredivisie, La Liga and Champions League-winning free agent who would cost them £8.3m in wages for fours start in as many years, was heralded as the sensible, logical move.

Bogarde announced on his personal website that his “ultimate dream” of playing in England would soon be realised. “There were a number of other clubs interested in me,” he added, “but I believe Chelsea have got a team that can win the Premiership and that made them the most attractive option.”

By the end of his debut, the Blues had slipped to 17th. An opening-day win over West Ham preluded a defeat at Bradford and draws against Aston Villa, Arsenal and a grateful Newcastle. Bogarde was then introduced to Stamford Bridge, chosen to face Leicester by caretaker managers Graham Rix and Ray Wilkins. They lost 2-0.

Claudio Ranieri was officially appointed the next day. Bogarde started twice more in the Premier League, in defeats to Sunderland and Everton, with the final appearance of his first season coming against Ipswich that December.

He would make two more match-day squads in the subsequent three-and-a-half years: watching a 4-2 UEFA Cup first-round loss to Viking FK in October 2002 from the bench, then playing the final game of his entire career as a late substitute against Gillingham in the League Cup a month later.

Across 12 appearances, Bogarde played 548 minutes, earning the equivalent of just over £15,000 for each. He was asked to train first with the reserves then the youth team, never missing a session for anything other than injury, before not even being given a squad number in his final season.

It seems bizarre to think that the Chelsea chapters of both Bogarde and Roman Abramovich overlap; the new owner was said to feel “powerless” over the situation in January 2004.

Bogarde spent the final two months of his contract crossing off the days on the calendar hung in his London apartment until release. Stories of him commuting to and from the Netherlands either each day or once a week were described as erroneous. In an interview with a Dutch journalist – Bogarde refused to speak to the English press who he unsurprisingly felt targeted by – shortly before his departure, he spoke of working towards “the light, to the end of the career, to freedom”.

It feels crass to read a footballer speak in such terms but it is important to understand his position. Bogarde was treated as a pariah by much of the media, yet Chelsea were rarely blamed for their part. As he once noted: “A contract is a contract. I signed the contract Chelsea offered. As far as I am concerned, Chelsea are committed to pay me the salary they offered me.”

From a difficult upbringing in Suriname, with his father described as ‘volatile’ and frequently not at home, Bogarde’s stance was simple: “You have to understand my history.” The declaration that “if I had not succeeded as a player, I would have become a criminal” was stark but revealing.

He was going to take the money he was contractually owed. “Why should I throw fifteen million euro away when it is already mine?” he once asked, and to that there is no answer. “This world is about money, so when you are offered those millions you take them.”

As with many crimes, the chief suspects indulged in plenty of finger-pointing. Vialli claimed to be oblivious to the signing, while Chelsea managing director Colin Hutchinson stated that he oversaw the move with the manager’s “full knowledge and authority” after it became “impossible to do a reasonable deal” for primary target Gareth Southgate. Vialli was sacked within a fortnight of the signing; Hutchinson stepped down in May 2002 to become a consultant to a player agent company.

Bogarde outlasted both by at least two years.

The most curious thing about Bogarde’s story is how he viewed his role and felt that obligation, that duty, that responsibility to fulfil those professional commitments perhaps more than any player before or since.

“What helps is the attitude that I must be ready, at any moment, to play in the first team,” he said in early 2004, his last competitive appearance having come well over a year prior. “That is what my contract says and that is what I try to do. So I train hard and when the coach asks for me I will be ready.”

For someone supposedly lacking a moral compass, that is a refreshing approach. Bogarde was so insistent that Chelsea hold up their end of the bargain that he pledged to do the same to the absolute letter. He was constantly available but unwanted; the finest example of but the greatest protest against the over-indulgence of the sport; a footballer in theory only.

“I may be one of the worst buys in the history of the Premiership but I don’t care,” Bogarde said even before retirement, preempting his immortality in evergreen lists and features. He did not feature much for Chelsea, but he damn well played the game.